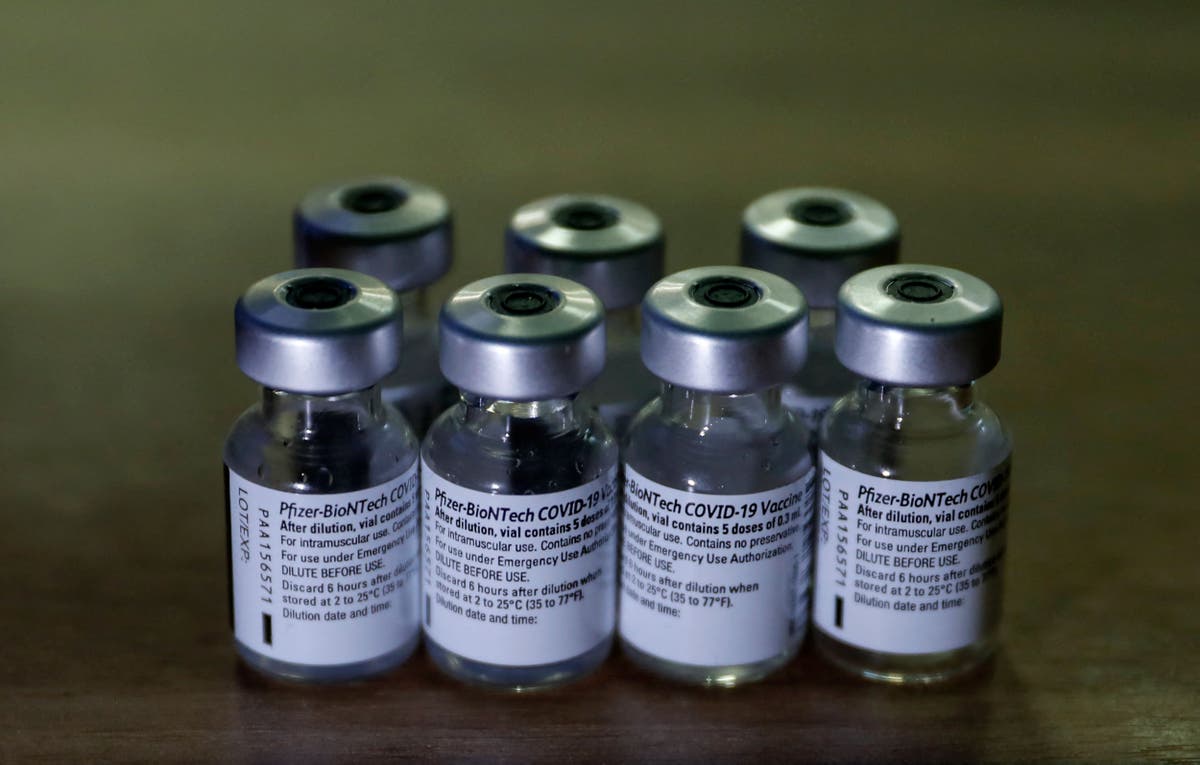 New bookings for Covid-19 vaccinations have been closed for the month of April after the NHS warned of a “significant reduction” in vaccine supplies.

A letter sent to regional health bosses from NHS England said that the government’s Vaccine Task Force warned them of a possible shortage from 29 March due to “national inbound vaccine supply”.

This has sparked fears that lockdown easing could be delayed. Microbiologist Dr Simon Clarke said that the “ripple effects” could last for “months”.

But the government has played down the significance of the shortage, with health secretary Matt Hancock insisting that the UK’s vaccine targets remain “on track”. Pfizer and AstraZeneca have similarly denied that they are facing disruptions to their supplies.

Meanwhile, India is facing a spike in Covid-19 cases, with numbers doubling in Maharashtra – the state which contains Mumbai – over the last fortnight.

Pfizer and AstraZeneca have denied suggestions that the UK could face a vaccine shortage in coming weeks.

Pfizer said deliveries “remain on track” for the first quarter of its 40 million dose agreement, with a “steady supply of vaccines” delivered so far.

AstraZeneca said: “Our UK domestic supply chain is not experiencing any disruption and there is no impact on our delivery schedule.”

The drug giants’ statements were issued after NHS England told its regional bosses that first doses will be “significantly constrained” from 29 March, a warning they say comes from the government’s Vaccine Task Force.

It remains unclear whether a vaccine shortage will occur and why the NHS was warned of one.

Foreign secretary Dominic Raab has accused Brussels of acting like a dictatorship after European Commission president Ursula von der Leyen warned that the EU could block vaccine exports to the UK to safeguard jabs for its members.

“Frankly, I’m surprised we’re having this conversation,” Mr Raab said. “It is normally what the UK and EU team up with to reject when other countries with less democratic views than our own engage in that kind of brinkmanship.”

The row comes as the NHS warns of a potential vaccine supply shortage from 29 March. Health secretary Matt Hancock has sought to downplay any possible delay to vaccine rollout, saying that government vaccination targets remain “on track”.

He went on to describe the letter sent to regional bosses by NHS England as a “standard technical letter”, reflecting the “ups and downs of the supply of the future weeks”.

NHS England warned regional health bosses of a “significant reduction” in vaccine supplies from 29 March and closed booking slots for the month of April.

Local NHS leaders were told to concentrate on the over-50s and other priority groups, as well as on administering second doses.

The letter local leaders were sent said that the government’s Vaccine Task Force had warned of a “significant reduction in weekly supply from manufacturers beginning in the week commencing 29 March, meaning volumes for first doses will be significantly constrained”.

It added that the shortage, caused by “reductions in national inbound vaccines supply”, was likely to last four weeks.

Welcome to The Independent’s Covid-19 blog, where we’ll be bringing you up-to-the-minute updates on case numbers, lockdown news and vaccine supplies in the UK and abroad. Follow along live.