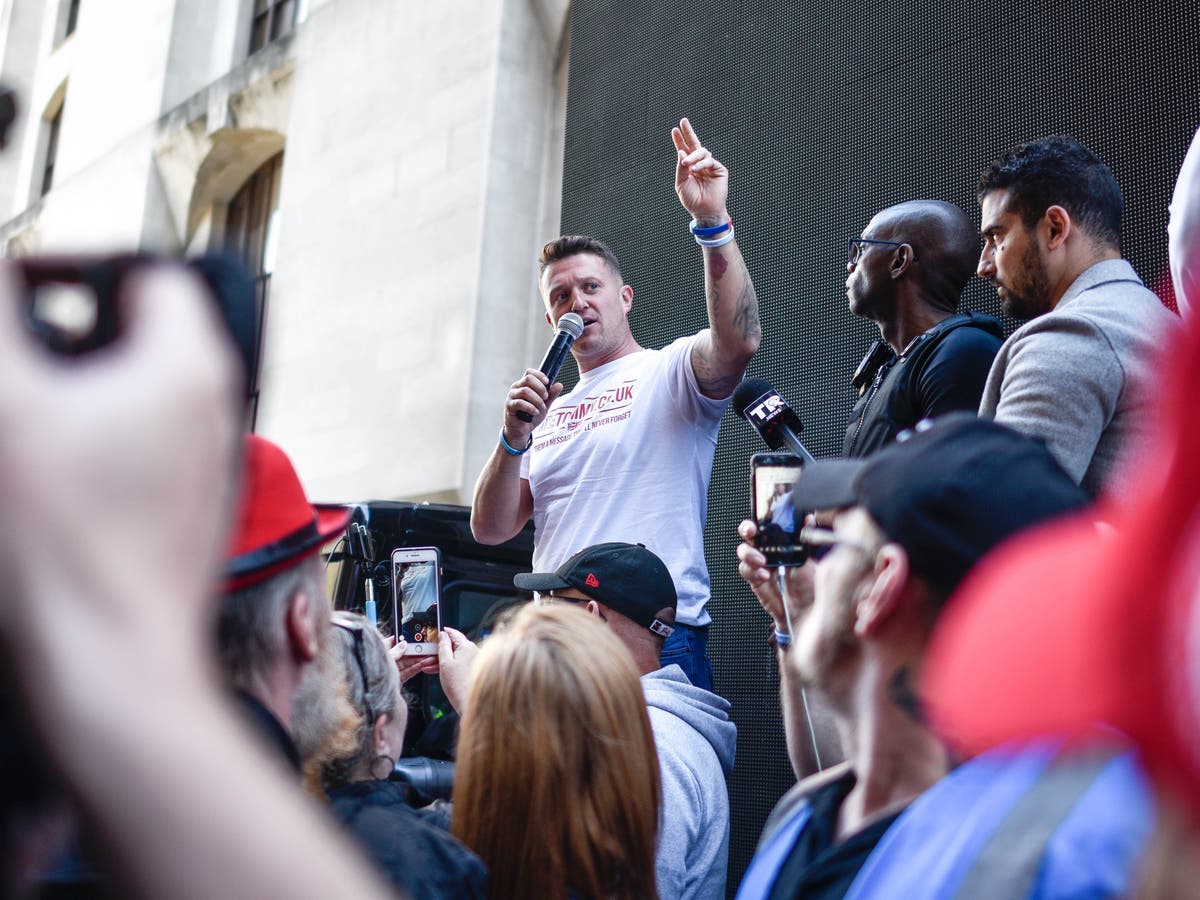 Tommy Robinson has been accused of misusing supporters’ money, as he declares himself bankrupt despite receiving hundreds of thousands of pounds in donations and funding, The Independent can reveal.

This month Robinson, the English Defence League (EDL) founder and now self-styled journalist, was listed on the insolvency register under his original name Stephen Christopher Lennon.

But The Independent has seen financial documents indicating the huge scale of funding given to Robinson since announcing “going independent” in 2018.

In little over two months, he received almost £425,000 in donations from his supporters, documents suggest. He is also believed to have raised a significantly larger amount after being jailed for contempt of court in May 2018, though an American group called Middle East Forum said it had funded his defence.

Former employees have now raised questions about where the money from fundraising campaigns went. However, Robinson strongly denies misusing any funds.

Around £10,000 was donated for a protest called the “day for freedom” that Robinson headlined in May 2018 – but Caolan Robertson, who worked for the far-right activist at the time, claims money he requested to purchase equipment and cover overheads “never materialised”.

The video producer, who has since stopped working with Robinson and disassociated himself from the far right, said he witnessed the transfer of large sums from a crowdfunding page into the activist’s business account.

He told The Independent that after noticing the withdrawal of £33,000 in donations, he asked what the money was being used for.

Mr Robertson alleged his employer said he had “mates I’ve got to pay back” for “seshes”. “We realised that he was withdrawing huge amounts of [donations] in cash from a business bank account, and just giving it to his friends who were selling him coke and who he owed for nights out,” he added.

“That wasn’t what we signed up for when we told our supporters that we needed it for kit, expenses, transport, security and staff costs.”

His concerns were echoed by another former employee who said they were not properly remunerated while working for Robinson, and a third person said payments they were due were delayed for several months.

Mr Robertson claimed that when drunk, Robinson would boast of being “f***ing loaded” and making “mad money”, while making lavish purchases, including a new car and designer clothes.

Robinson denies using cocaine and said he removed donated funds from the Donorbox account and put them into a business account “to run the business operations”.

“These operations have included costs of travel, accommodation, film and editing crew and social media activity,” he added.

“We have also made donations to the families of child victims of grooming, for example at Christmas.” He also suggested funds have been spent on security, “after I have been attacked or my family threatened”.

As Robinson unsuccessfully campaigned to be elected to the European Parliament in 2019, his family home – which he claims to have built himself – was on the market for £900,000.

The large property, complete with a hot tub and annexe and situated in an upmarket Bedfordshire village, is believed to have later sold for a lower amount.

While living there, Robinson continued asking supporters for money to fund his work, and his website’s email address was flooded with earnest messages from well-wishers.

“I have just donated £20 for your cause Tommy, sorry I cannot afford any more as I am only on minimum wage,” one man wrote in an email seen by The Independent.

Another supporter wrote: “I haven’t got much but when I saw you needed kit and a new camera, I donated £50 to your website.”

Robinson was also making money from other sources, including sales of his books and payments for speaking events.

In August 2018, he signed an agreement to be paid £10,000 for a speaking tour of Australia, with half the amount to be received before his arrival in the country.

Tickets went on sale for between A$85 (£48) and A$995 (£563) per head, but Robinson was not able to enter the country after being refused a visa. Robinson said he did not receive any money and it is not known whether ticket holders received a refund.

One of Robinson’s most significant fundraising drives is thought to have come from his bid to raise legal fees when jailed for contempt of court in May 2018, after filming a live stream outside Leeds Crown Court that breached reporting restrictions.

However, a US think tank called the Middle East Forum, which claims to work to “protect western civilisation from Islamism”, said it helped to fund his legal team as well as organising three “Free Tommy” rallies.

Marc Fink, director of the Middle East Forum’s legal project, would not say how much money had been spent on Robinson.

“The forum’s legal project has made a number of specifically earmarked grants to Robinson’s legal defence in cases that impacted the public discussion of Islam,” he told The Independent.

“I can confirm that the forum helped fund rallies in support of Robinson’s right to free speech, regardless of whether or not we agree with what he says.”

The group also claimed to have spurred Donald Trump’s ambassador for international religious freedom to raise the case through diplomatic channels, and brought Republican congressman Paul Gosar to speak at protests.

Robinson claimed in 2018 that his former employer Ezra Levant, of Rebel Media, had “sorted out all my legal costs”. When asked about the funding, Mr Levant directed The Independent to a 2018 video in which he said he anticipated legal costs would amount to tens of thousands of pounds, with any surplus funds transferred to Robinson’s wife.

Robinson, meanwhile, pledged to put money he raised into six lawsuits, but attempted action against The Independent and two other news groups was dropped in July 2019. The Independent is not aware of Robinson launching any other cases.

He also said he wanted to use the money to fund a “new news network … across Europe”, which did not materialise.

Robinson continues to ask for donations, with a recent email to subscribers appealing for contributions towards legal fees in “numerous” court cases.

They include a defamation case Robinson is defending relating to allegations he made against a teenage Syrian refugee and proceedings following an assault charge, for which he was convicted.

“Tommy needs your help,” read a message on his website. “Tommy fights for us all, the burden is too great for one man to carry, maybe you can help alleviate that burden?”

The TR News website takes donations in numerous forms, including cryptocurrency, and also hosts a merchandise shop for supporters.

Mr Robertson said he did not remember formal records being kept over how earnings and donations were spent. Robinson suggested Mr Robertson did not have access to his accounts and added that any comment as to how money was spent would be speculation.

“I remember him going to a cashpoint and withdrawing £500 and being like ‘that’s for later’ and he just carried on doing it,” he added.

“It went to coke habits, prostitutes, and his supporters thought it was going to kids and security and all that stuff.”

Robinson denied the claims, telling The Independent: “I have the utmost respect for my supporters and have never behaved in a dishonest way towards them.

“I confirm that I do not use cocaine and prostitutes. I do wear designer clothes and always have done. I had other sources of income including from building and property development and tanning shops. I no longer have any assets or income.

“Any purchases of personal items such as designer clothing have been paid for personally.”

Public records show Robinson is linked to a number of companies under the names Stephen Lennon and Paul Harris. Only one company, a Luton-based construction company, is listed as active and no accounting information has yet been filed.

The other five companies with Robinson as director, including a “news agency” and firms for “translation activities”, “book publishing” and “management consultancy”, were dissolved without publishing accounting information.

Mr Robertson said the tens of thousands of people who donated to Robinson deserve to know how their money was spent.

“I think that they should know that their messiah, their prophet, is a charlatan,” he added. “He should be exposed for who he is.”

0 0 0 0
Previous : NHS warns UK will face ‘significant reduction’ in vaccine supplies for four weeks from 29 March
Next : Russia calls back US ambassador as it ponders ‘irreversible degradation’ after Biden brands Putin a ‘killer’