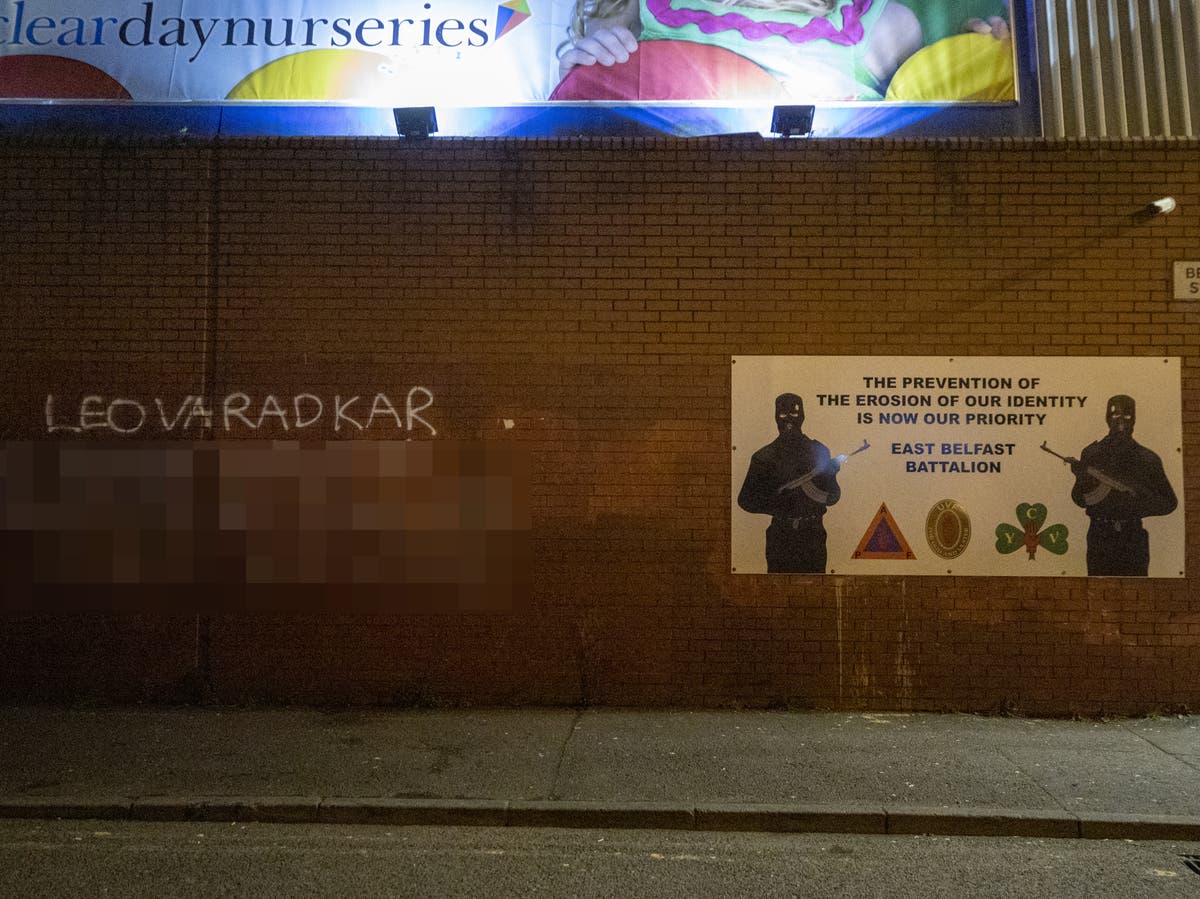 The graffiti appeared across two locations in east Belfast – a wall in the Belvoir Street area and on a commercial building in the Newtownards Road area.

The Police Service of Northern Ireland (PSNI) launched the investigation on Wednesday, with the south’s Garda Síochána being kept in the loop – particularly the teams who provide protection for tánaiste Mr Varadkar and foreign affairs minister Mr Coveney.

Mr Varadkar’s name and address were displayed next to a loyalist sign depicting two gunmen and the words: “The prevention of the erosion of our identity is now our priority. East Belfast Battalion.”

Various loyalist logos, including those of the Ulster Volunteer Force (UVF) and Protestant Action Force (PAF), can be seen on the mark too.

It is the latest in a string of graffiti threats in Belfast as anger over the Northern Ireland protocol, implemented as a result of Brexit, continues to grow.

In January, a smear titled “an ode to Leo Varadkar” was painted in the Belvoir area of south Belfast, warning the ex-taoiseach he would be hanged if he “set foot in Ulster”.

A PNSI spokesperson said in a statement “officers are aware of the graffiti … and inquiries are ongoing”.

While no arrests have been made for any of the offences yet, the graffiti is thought to be part of a campaign by unionists who feel the protocol – which effectively creates a border in the Irish Sea for goods moving between Britain and Northern Ireland – cuts them off from the rest of the UK.

On a visit to Belfast last week, Boris Johnson admitted the measure was not operating as he envisaged and promised to address the concerns being raised by MLAs and their constituents.

A number of Northern Ireland politicians have spoken out to condemn the latest graffiti threats, with East Belfast MP Gavin Robinson labelling them “pathetic”.

He told the Belfast Telegraph that he had contacted Belfast City Council, which confirmed that the sinister message would be removed on Wednesday.

“Nobody should be doing this sort of thing. It’s very clear that all politicians and everybody in society should call out these sorts of activities,” the South Antrim MLA told the newspaper.

“Whether it’s Michael Gove, Simon Coveney, Leo Varadkar or whoever it happens to be, it’s completely unacceptable.”

Neither Mr Varadkar nor Simon Coveney have commented on the situation yet, though it is understood they are being kept up to date on developments.

0 0 0 0
Previous : Elon Musk says Starship SN11 ‘almost ready to fly’
Next : Everything you need to know about UK cruises this summer, from voyages to vaccines