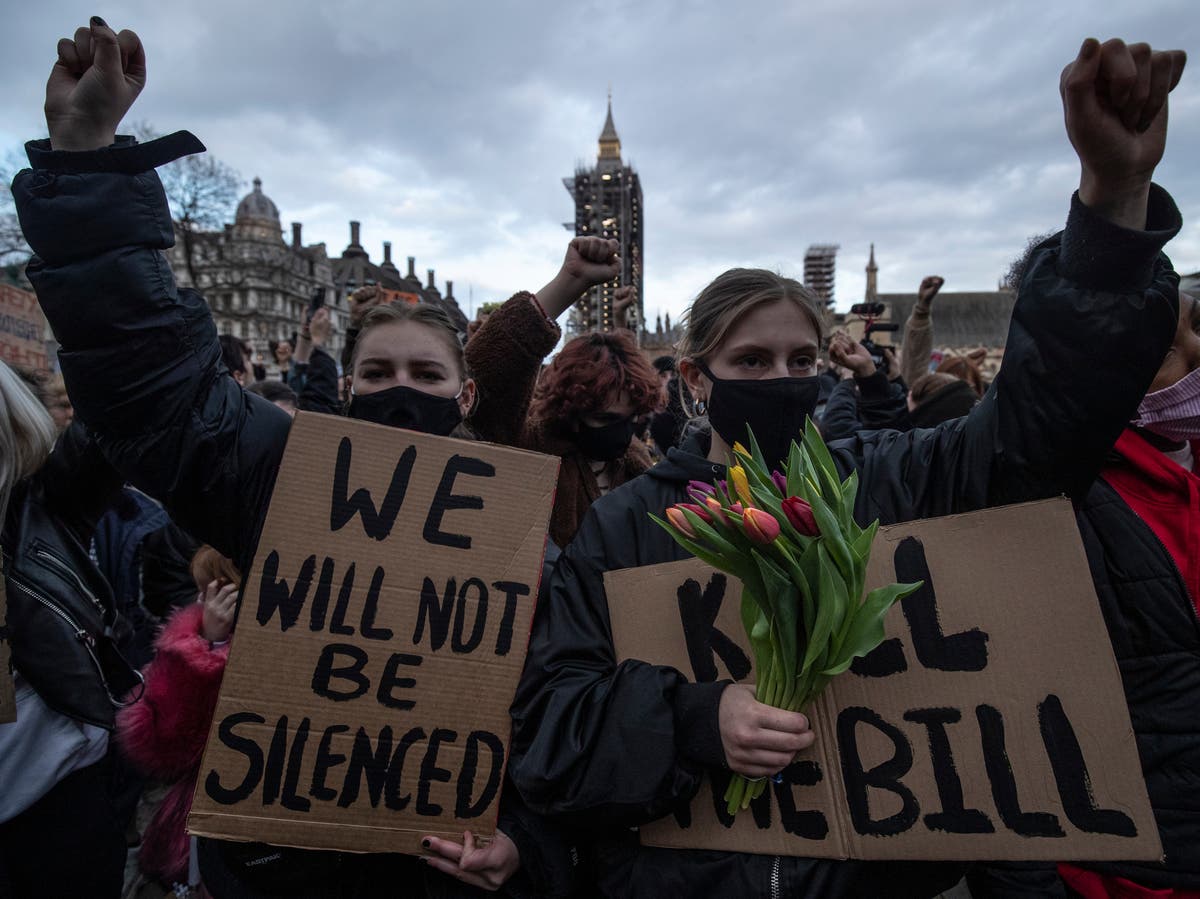 More than 700 of the UK’s leading legal academics have signed a stinging open letter urging Boris Johnson to ditch “draconian” restrictions on the freedom to demonstrate, in one of the largest protests of its kind in decades.

The signatories, who represent a significant proportion of the UK’s legal scholars and include more than 120 professors of law from universities including Oxford, Cambridge, Durham and York, warned of “an alarming extension of state control over legal assembly” from measures in the prime minister’s controversial Police, Crime, Sentencing and Courts Bill.

Scenes of women being forced to the ground and handcuffed while attending a vigil to murder victim Sarah Everard in south London on Saturday vividly highlighted the dangers of  extending powers to control protests and public gatherings, they said.

The 300-page bill, which was rushed through its second reading in the Commons this week just days after being published, dramatically extends police powers to clamp down on protests and gives home secretary Priti Patel the power to define the kind of “serious disruption” which could lead to demonstrators being arrested and prosecuted.

Under its terms, individuals could be jailed for up to 10 years for causing  “serious annoyance or inconvenience”. Police could impose legally binding restrictions on marches or rallies on the grounds that the noise generated “may result in serious disruption to the activities of an organisation” or may “have a relevant impact on persons in the vicinity of the protest”. And unprecedented new powers could impose controls on protests by a single person.

Anyone breaching conditions imposed by police can be arrested and prosecuted, even if they did not know they were in place, as the bill lowers the threshold which currently says it is an offence “knowingly” to fail to comply, making it possible to be charged with breaking a restriction which they “knew or ought to have known about”.

Today’s letter, published in The Independent, warned that such measures represent “an existential attack on the right to protest”.

Signatories pointed to warnings from the UN Special Rapporteur on the Rights to Freedom of Peaceful Assembly and of Association that the threshold for imposing conditions on public assemblies in England and Wales is already “too low” and “does not reflect the strict test of necessity and proportionality” in international conventions.

And they expressed “alarm” that the proposed use of so-called Henry VIII powers would allow the home secretary to alter the definition of prosecutable behaviours without parliamentary approval or scrutiny.

“Attempts to push such draconian measures through to a second reading in Parliament in less than a week without proper consultation set a dangerous precedent for the future,” they warned.

“The disturbing scenes at Clapham Common on Saturday evening highlight the dangers of affording the executive broad powers without appropriate checks and balances in place. We urge the government to abandon the Bill, and engage with civil society and relevant stakeholders about how the right to protest can be protected.”

“Within 24 hours of circulating this letter, we had received more than 700 signatures and the final number could easily reach 1,000,” she told The Independent. “It’s not just the ‘usual suspects’ with a particular interest in the area, it is a real broad opposition among eminent legal scholars across the piece. It is the strongest response I have seen in my career.

“It is a mark of concern not only about the bill’s fundamental attack on the right to protest peacefully – which is an absolute right in any democracy – but also about the speed at which this is being rushed through, in the context of a pandemic and without proper consultation.

If passed, the legislation would have a “chilling effect” on anyone considering taking part in a protest against the government’s actions, by increasing the fear that even peaceful demonstrations could lead to arrest, she said.

“It is a real slippery slope in terms of the power of the executive to clamp down on free speech and assembly,” Dr Gilmore said.

Dr Gilmore said that the “deeply disturbing” images of women being restrained at Clapham Common had heightened existing concerns about government responses to protests by groups such as Extinction Rebellion and Black Lives Matter, which Ms Patel branded “dreadful”.

Contrary to ministers’ assertions, there was no academic evidence to show that demonstration tactics were becoming more disruptive or extreme, she said. Mass arrests at demos frequently led to very low rates of convictions.

“A lot of people are uncomfortable with the attempt to describe campaigns as extremist or violent,” said Dr Gilmore. “This bill hasn’t come out of nowhere, it is part of a pattern to delegitimise anyone who disagrees with the government.”

The human rights group Liberty has called the police bill a “staggering assault on our right to protest, as well as an attack on other fundamental rights”.

Despite loud protests form opposition parties and a noisy demonstration outside Parliament, the legislation passed its first hurdle in the Commons by 359 votes to 263 on Tuesday without a single Conservative MP rebelling. It now faces further opposition as it passes through remaining stages in the Commons and Lords.

Liberty policy and campaigns officer Emmanuelle Andrews said: “We should all be able to stand up for what we believe in, and protest is a key way we make our voices heard and fight for a fairer society.

“However, these principles are under attack and the ability for us to hold the powerful to account is now under immediate threat.”