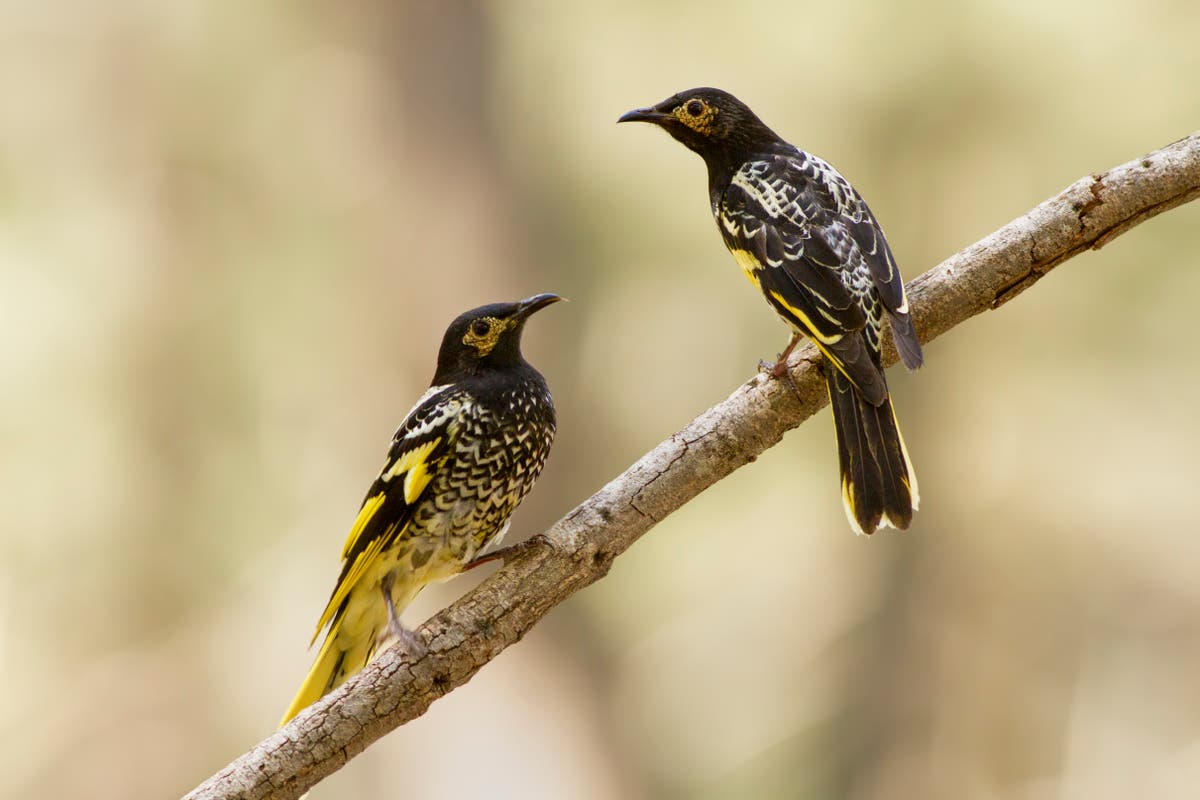 An endangered species of Australian songbird is gradually losing the ability to sing its distinctive call as dwindling numbers have left juveniles without older peers to learn from, researchers have discovered.

The regent honeyeater, found in wooded areas of southeast Australia, are extremely rare with as few as 300 believed to be living in the wild.

Scientists studying the critically endangered honeyeater found the birds were at risk of losing their vocabulary as adults members of the species became increasingly rare.

Ecologist Ross Crates, lead author of the study, said males were observed in the wild mimicking the songs of different species.

This was affecting their ability to mate, since females were found to avoid nesting with males singing unusual songs.

Dr Crates compared finding the honeyeater in the wild to “searching for a needle in a haystack”.

“We noticed that some of the males were actually singing the songs of different species, which was quite unusual, so we decided we would record the songs,” he told the BBC Radio 4 Today programme.

“After six years we now have the data set that shows they are generally doing this, and it is probably a consequence of the fact that they are so rare.”

Male honeyeaters once formed large winter flocks, meaning that older mentors were nearby during young birds’ impressionable first years. Now they are sparsely distributed across the landscape, with many flying solo.

In areas where numbers are in steep decline, the males were singing simplified or “totally incorrect” songs.

Honeyeaters are facing extinction because of the combined threats of habitat loss and climate change. More frequent episodes of drought in the region are affecting the flowering cycles of the local trees, which Dr Crates said affected the honeyeaters ability to mate.

He said the fact they were losing their ability to sing the correct song was a “dire warning sign that the species is on the brink of extinction. For the next few decades, our focus is really to do everything we can just to stabilise the population.”

Those efforts include placing plastic rings at the base of trees to prevent lizards and possums disturbing nests.

The team, whose research was published in the journal Proceedings of the Royal Society B, is also working with a zoo breeding programme to teach the juvenile males in captivity to sing.

They are using both audio of the correct calls and two adult male birds caught in the wild, and will compare whether the young honeyeaters learn best from playbacks or actual songs.

Co-author of the study Dr Dejan Stojanovic said: “18 male regent honeyeaters, or around 12 per cent of the total population, were only able to copy the songs of other bird species.

“This lack of ability to communicate with their own species is unprecedented in a wild animal.

“We can assume that regent honeyeaters are now so rare that some young males never find an older male teacher.”