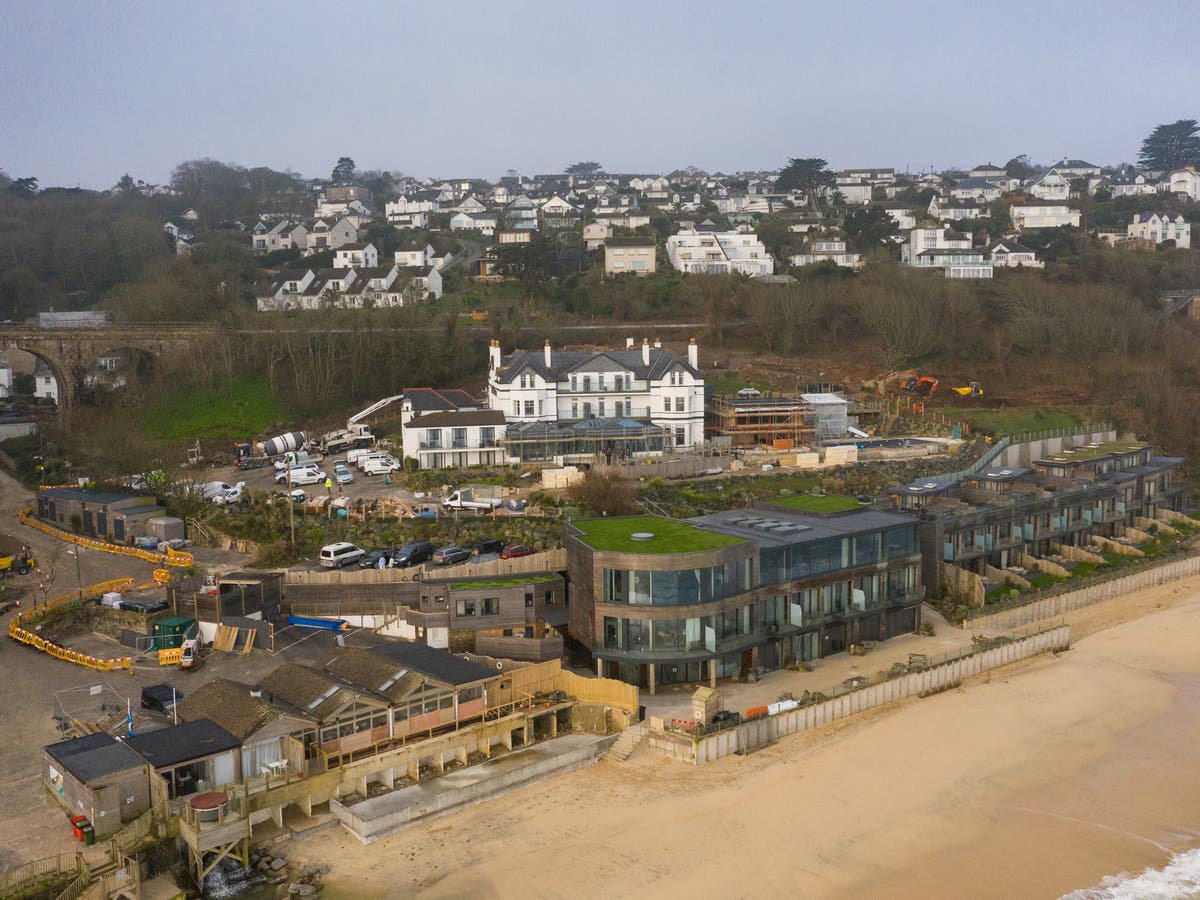 A Cornish hotel with an eco-friendly reputation that is due to host the G7 summit has been accused of hypocrisy by locals after pulling down trees as part of a redevelopment of the site.

The Carbis Bay Hotel near St Ives has denied damaging ancient woodland as it clears nearby scrubland for further development ahead of the summit – but allegations that trees have been pulled down to make way for building work prior to the submission of a planning application has caused local concern and claims of a “crazy amount of deforestation”.

Cornwall Council told The Independent it is currently reviewing the hotel’s planning application, but added: “We have received a number of complaints in relation to work already being undertaken at the hotel, which the council’s planning enforcement team is investigating.”

After concerns were raised by wildlife campaigners, a group called “Resist the G7” staged a protest near the hotel over the weekend. A spokesperson said: “We won’t stand by while they take destructive action.

“The hypocrisy of the world leaders discussing the climate crisis in a so-called eco hotel that is destroying woodland is staggering.

“Carbis Bay Hotel thinks it can ignore planning laws because of the G7. We’re here to tell them they can’t and that they will be held to account for their actions.”

The hotel, which has won awards for its environment policies, has said the works are part of their long term plans to develop the site.

In a statement posted to social media, the site added that claims that historic woodland had been damaged and badger habitats had been destroyed were a “misunderstanding”.

“Part of our long-standing plans for the estate included clearing a small self-seeded scrubland area to the side of the hotel, and work on this area started several years ago”, the statement added.

“We can confirm this was not ancient woodland and there are no badger sets on this piece of land.We are working closely with a local landscaping team to increase planting in this area replacing the scrubland with a plethora of trees and plants more suited to the coastal environment”.

In early June, the hotel will be the backdrop for a meeting of the G7 world leaders for the first time since the beginning of the global coronavirus pandemic.

Cornwall’s tourist-dependent economy has been hit hard by the lockdowns and authorities have welcomed the summit as a chance to showcase the natural beauty of the area. As a result, controversy over the environmental record of the hotel at the centre of the summit is an unwelcome distraction.

Tony Harris, the Mayor of St Ives told The Independent: “People are quite upset and disappointed about it, without actually knowing exactly what’s being done and what’s planned to be done.”

He said the planning application had still not been published online over the weekend, which meant “we’re a little bit in the dark, and we need more facts,” and he urged people not to “leap to conclusions”.

“What I do know is that the people of Cornwall are understandably quite upset and disappointed because seemingly, some work is being done which hasn’t been advertised or mentioned anywhere, but we’re not really operating with all the facts here.”

He said the G7 meeting was “very very important”, because of the global media attention, which would raise the profile of St Ives, “which has been really hit by the coronavirus pandemic”.

“This is a really good way to bounce back for the town… so this issue is something we could do without, quite frankly.”

Former councillor Richard Glanville, whose property overlooks the hotel’s site, addressed concerns raised by wildlife campaigners that the clearance of the woodland had destroyed badger setts.

“The badgers are long gone”, he told The Independent. “The hotel has been developing for the last seven to ten years, and without doubt it is probably the most prestigious hotel and location there is in the whole south west. In my view, what they’ve done at the hotel is nothing but enhance Carbis Bay.”

“They’re taking out the scrub and utilising that area, which I think is a very good thing to do – it’ll just enhance what they’ve already done. It’s not damaging.”

He said from what he could see the hotel had cleared some scrub and “they’re putting in some concrete bases at the moment”.

Carbis Bay Hotel told The Independent: “The investments in the estate over recent years, including our on-site energy centre, have cemented Carbis Bay’s position as one of the UK’s best and greenest destinations, in one of the most beautiful bays in the country. We appreciate that our passion and commitment to the environment are shared by many, and would like to address the misunderstanding on social media, and reassure our guests and neighbours about the area that we are working on at the moment.

“Part of our long-standing plans for the estate included clearing a small self-seeded scrubland area to the side of the hotel, and work on this area started several years ago. We can confirm this was not ancient woodland and there are no badger sets on this piece of land. The works currently underway across the site are part of longstanding improvements to the facilities at Carbis Bay Estate, which will also support hosting the G7 Summit in June. The due planning process is being followed, and we are in touch with the Council.

“We are working closely with a local landscaping team to increase planting in this area replacing the scrubland with a plethora of trees and plants more suited to the coastal environment.

The South West Coast Path is fully open and there are no plans for this to be re-routed. Our commitment to this important route through the estate includes the upgrading of the existing surface to improve access and safe passage to the beach.

“Carbis Bay Estate is committed to sustainability, and dedicated to protecting the environment now, and for generations to come.”