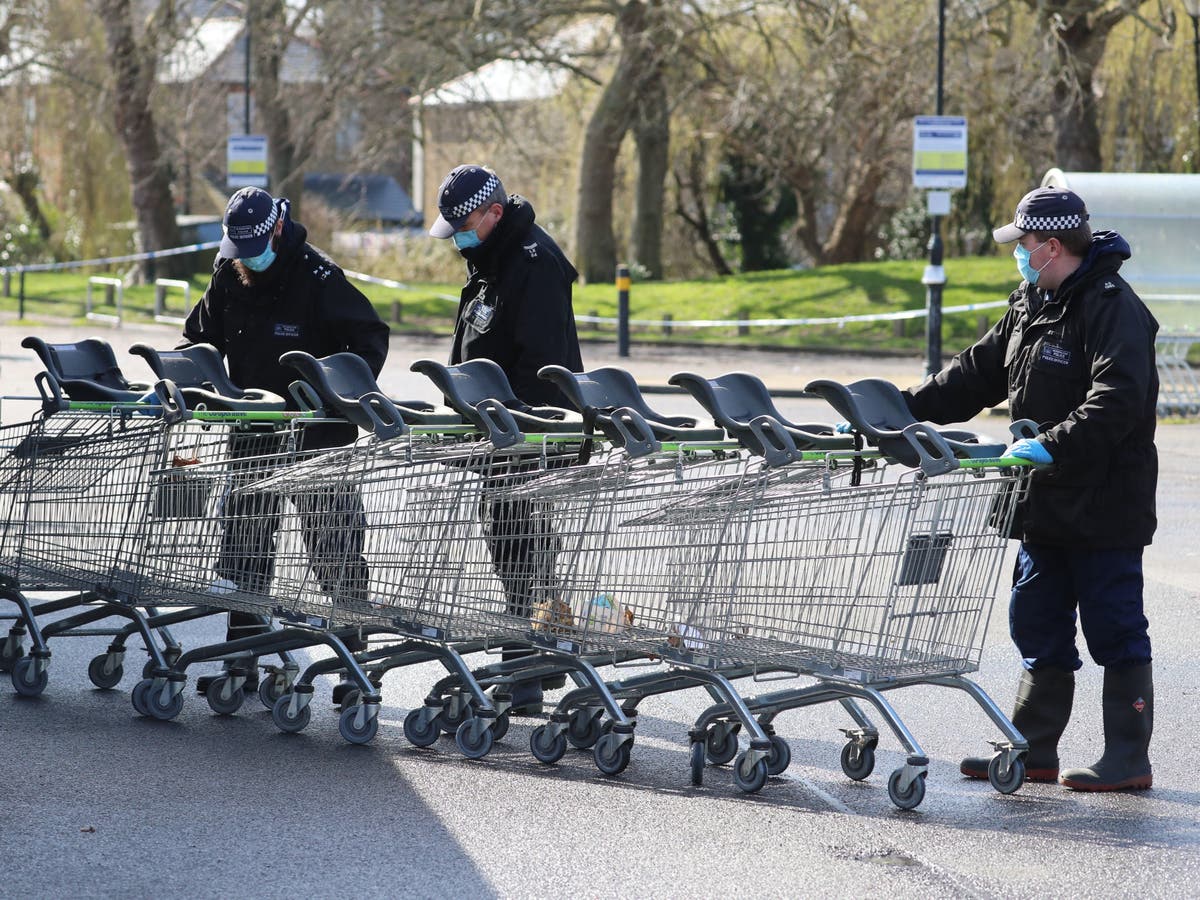 Police officers investigating the death of Sarah Everard have been combing a supermarket car park and stream in Kent.

Officers were seen using sticks to search through a shopping trolley shelter outside a Co-op in the town of Sandwich, while others looked under vehicles on Monday afternoon.

At the edge of a police cordon, a few officers gathered for discussion as one showed their colleagues a piece of gold jewellery before it was placed inside an evidence bag.

A specialist marine unit from Devon and Cornwall is also on the scene, with officers believed to be preparing to search a stretch of water.

Large proportions of the historic town have been taped off as inquiries continue into the death of the 33-year-old marketing executive, whose body was found hidden in woodland about 30 miles away in Ashford on 10 March.

Serving Metropolitan Police officer Wayne Couzens, 48, has been charged with kidnapping and murdering Ms Everard, who went missing while walking home from a friend’s flat in south London on 3 March.

In a separate car park by the town’s Guildhall, officers dressed in blue overalls were seen pulling on wellies in another cordoned-off area.

Divers carrying breathing tanks were seen heading towards The Ropewalk, a path near the centre of the town, which the River Stour runs through.

Once there, the officers lowered themselves into a stretch of water and began slowly moving along.

On Sunday, Sandwich Town Council said it was in contact with Kent Police on behalf of Scotland Yard as part of the investigation.

Scotland Yard said police have routinely been searching areas of London and Kent as part of the investigation.

The Metropolitan Police said Mr Couzens joined the force in September 2018 when he worked for a response team covering the Bromley area, before moving to the Parliamentary and Diplomatic Protection Command in February 2020.

Mr Couzens appeared at Westminster Magistrates’ Court on Saturday morning, where it emerged Ms Everard’s body was found inside a large builder’s bag.

The defendant was remanded in custody to appear at the Old Bailey on 16 March.

Arrests were made in central London on Monday night after protesters marched through the capital during a third day of demonstrations following Ms Everard’s death.

Hundreds of people gathered in Parliament Square before moving on to Westminster Bridge where traffic was blocked off as Reclaim These Streets campaigners chanted and waved banners and police officers halted oncoming cars.

Crowds then marched across to Trafalgar Square, before staging a protest outside the Metropolitan Police’s headquarters at New Scotland Yard.

Earlier in the day, the Independent Office for Police Conduct (IOPC) announced it was launching an investigation into allegations a Metropolitan Police officer, who was stationed at a cordon in Kent as part of the ongoing search operation, shared an “inappropriate graphic” with colleagues.

The police watchdog said the graphic did not contain photographic images or any other material obtained from or related to the investigation into Ms Everard’s death, or images of her, however her family has been made aware of the development.