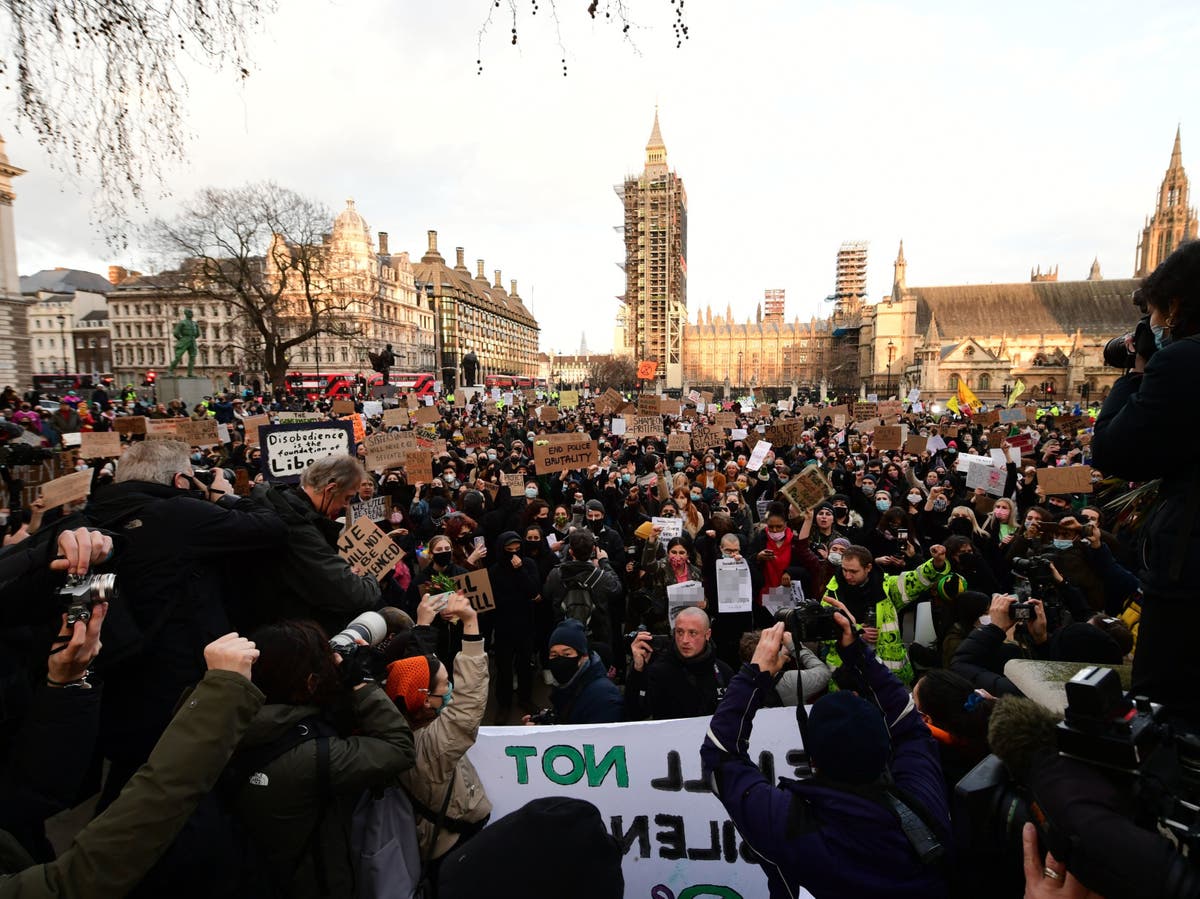 Arrests were made after protesters marched through central London for a third day of demonstrations following the death of Sarah Everard.

Police gave demonstrators an ultimatum to go home immediately or face being arrested as dozens were stopped over coronavirus rule breaches on Monday night.

One female protester told officers she was in her local area and had been going home before she was detained, while another was placed in handcuffs as fellow campaigners shouted “don’t kneel on his neck”.

Hundreds of people had earlier gathered in Parliament Square for the start of the demonstration in memory of Ms Everard and to protest against the government’s controversial new policing bill.

A large number of protesters then moved on to Westminster Bridge where they blocked off traffic as Reclaim These Streets campaigners chanted and waved homemade banners.

Crowds later marched to Trafalgar Square, before staging a protest outside the Metropolitan Police’s headquarters at New Scotland Yard.

Officers were seen making arrests, but official numbers have not been confirmed.

The Metropolitan Police issued warnings on Twitter throughout the demonstrations.

One tweet, about an hour and a half into the protest, said officers “continue to engage, with enforcement being a last option” but asked people to “go home”.

About an hour later, police said officers would “shortly begin moving towards enforcement activity” as they repeated their plea for people to “head home immediately”.

The Police, Crime, Sentencing and Courts Bill, which is currently at second reading stage in the House of Commons, would give officers more powers over protests.

Ministers have argued “recent changes in tactics” used by demonstrators, including gluing themselves to buildings and vehicles or obstructing access to buildings such as Parliament, have “highlighted gaps” in existing legislation.

Earlier on Monday Boris Johnson backed Metropolitan Police chief Dame Cressida Dick following calls for her resignation in the wake of clashes between police and crowds during a vigil for Ms Everard at Clapham Common on Saturday.

The police watchdog said an investigation into the actions of officers at the vigil was not within its remit, despite calls from mayor of London Sadiq Khan.

One will look into allegations that a Metropolitan Police constable, who was stationed at a cordon in Kent as part of the ongoing search operation, shared an “inappropriate graphic” with colleagues.

The IOPC said the graphic did not contain photographic images or any other material obtained from or related to the investigation into Ms Everard’s death, or images of her.

The other investigation will examine how Wayne Couzens, the serving Metropolitan Police officer charged with Ms Everard’s kidnap and murder, came to sustain head injuries on two separate occasions while in custody.

Ms Everard, a 33-year-old marketing executive, went missing while walking from a friend’s house in Clapham, south London, to her home in Brixton at about 9.30pm on 3 March. Her remains were found in woodland in Ashford, Kent, a week later.