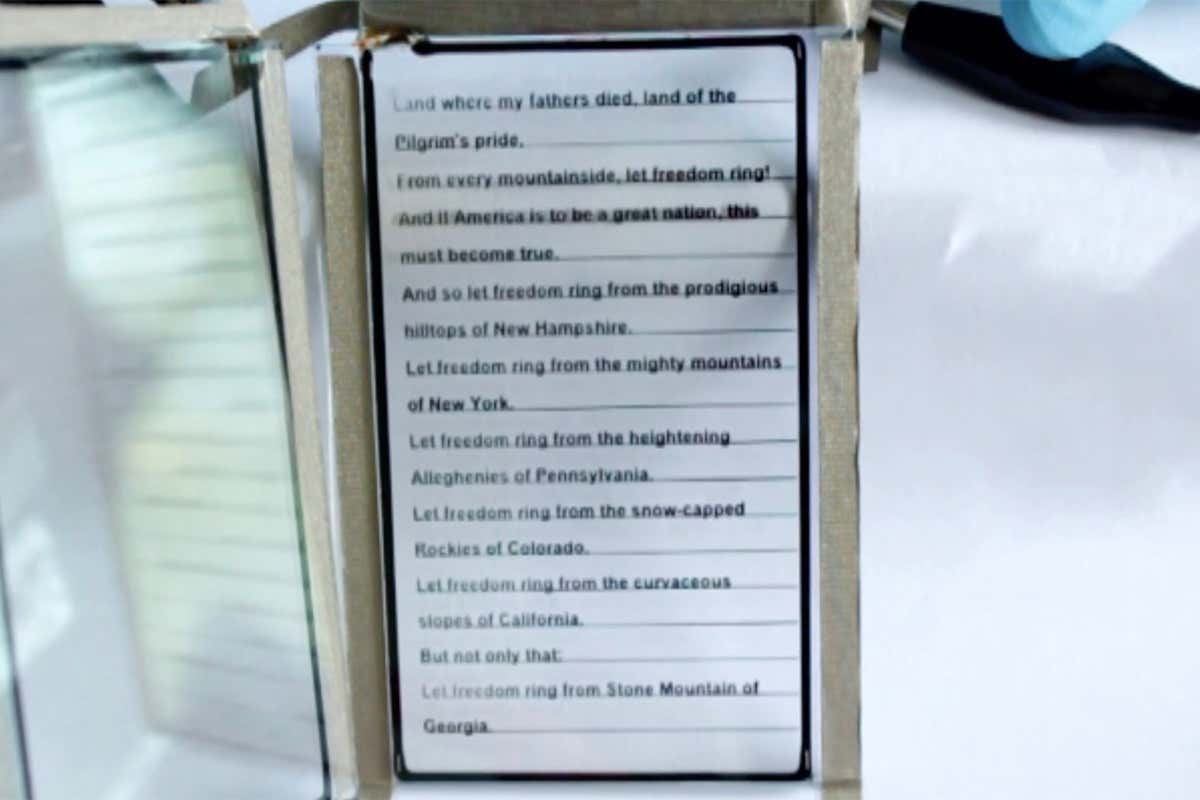 An ultra-thin glass screen that can smoothly go from transparent to displaying words could one day be used to make e-readers and billboards.

The screen is a type of electrochromic display, which turn opaque when an electrical current is applied to them. This technology has already been used in smart glass windows, which can control the amount of solar light passing through them, but many existing electrochromic displays are unable to produce a wide range of colours and often have a low contrast ratio – the measure of clarity, brightness and resolution.


Now Yu-Mo Zhang and his colleagues at Jilin University in Changchun, China, have produced an electrochromic e-reader prototype that can seamlessly transition between being transparent and displaying words with high quality and colour intensity.

Their e-reader is made up of two glass sheets, each about a quarter of a millimetre thick, laser-etched with a page of words. Sandwiched between the two sheets is a solution of copper ions and black dye molecules. When exposed to an electrical current, the dye molecules bond to the copper ions and turn black within the etched words.

The molecules are also “switchable”, meaning they break this bond when the voltage is reversed, turning transparent again. “The whole colour-change process is controlled by the voltage stimulation,” says Zhang.

The researchers found that this also works with eight other dyes, including magenta, purple, cyan and yellow. They separately tested these dye molecules on similar devices and found that they, too, could switch between colour and transparency when a voltage was applied – all while maintaining a high quality and brightness, says Zhang.

It should be possible to produce devices in a range of sizes, including for use as billboards, say the researchers. They are planning to figure out how to combine different coloured dyes to produce multi-coloured images, as well as how to do away with the need for laser-etching to let the devices display more than one thing.

Different dyes with better optical properties, many of which are available cheaply, could enhance the colour range and clarity of the images even further, says Zhenyin Hai at Xiamen University in China.

0 0 0 0
Previous : Physicists have measured gravity on the smallest scale ever
Next : A quantum trick with photons gives machine learning a speed boost