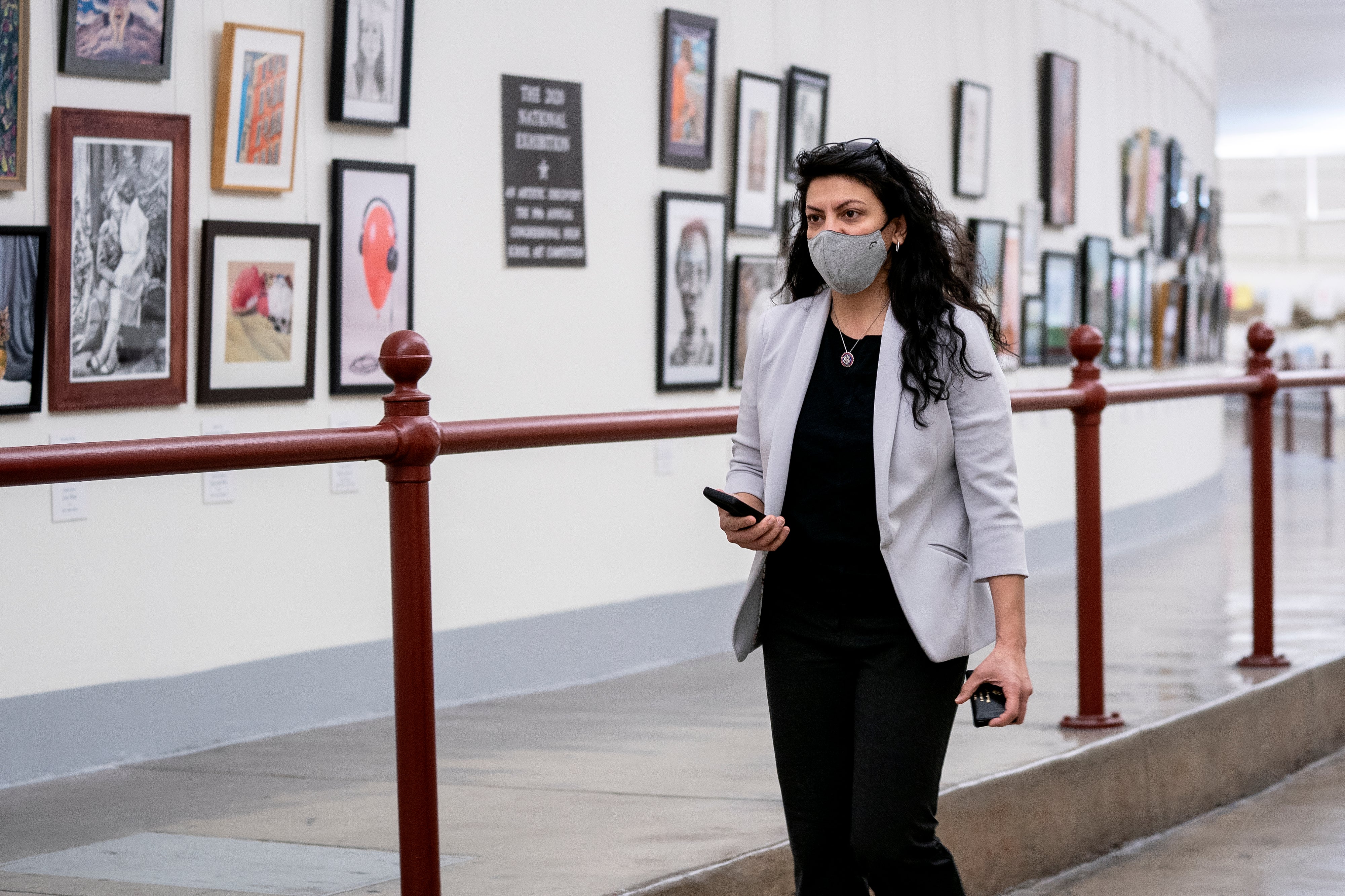 ‘Undermining democracy’: Rashida Tlaib on why the Squad is against new terror laws after Capitol attack

On 6 January, the banners of racist violence entered the US Capitol as rioters brandishing Confederate flags stormed one of the bastions of democracy, fuelled by the former president’s ongoing attacks on election integrity with a big lie that the election was stolen from his supporters.

While the deadly insurrection has revived calls for stronger domestic terrorism statutes, politicians including Michigan congresswoman Rashida Tlaib – a member of the high-profile “squad” of progressive lawmakers – argue that dozens of existing laws can do the same job.

Lawmakers say the inability to successfully target those responsible is not from the absence of authority or ability, but a lack of political willpower. A new War on Terror inside the borders of the US could ultimately end up placing more Americans in the government’s crosshairs, they argue.

“If our government and the previous administration had focused more on the threat of white nationalist terrorism and less on Black Lives Matter and civil rights groups and others, they would have seen this coming from miles away and taken action to prevent it,” Rep Tlaib tells The Independent.

“If anything, I find that by them looking away, it just enabled it,” she says. “The intelligence failure that allowed the Capitol breach was not the result of insufficient security or surveillance powers.”

Democrats like Congresswoman Tlaib say deadly white supremacist attacks have prompted well-intentioned but misguided calls among pundits and lawmakers to charge offenders through a domestic terrorism dragnet. In the wake of the attack on the Capitol, Hillary Clinton called for “new criminal laws at the state and federal levels that hold white supremacists accountable and tracking the activities of extremists such as those who breached the Capitol”.

President Joe Biden has tapped national security veteran Russ Travers – reportedly ousted under Donald Trump for eyeing the state of domestic threats – as a deputy homeland security adviser. The White House has also ordered the Office of the Director of National Intelligence to work with the FBI and the Department of Homeland Security to deliver a review of domestic extremist threats.

The Brennan Centre for Justice at New York University’s School of Law has argued that “existing statutes have long provided substantial authority for the federal government to investigate and prosecute acts of domestic terrorism.”

Congresswoman Tlaib – one of the first two Muslim women in Congress, along with Ilhan Omar of Minnesota – knows far too well how reactionary policies to violence in the US can infringe on civil rights and harm communities that lawmakers sought to protect.

“Even though I think people are well intended here, to expand the government’s national security powers once again at the expense of the human civil rights of the American people would only serve to further undermine our democracy, not protect it,” Ms Tlaib tells The Independent.

She is leading an effort to urge congressional leadership to reject calls to expand national security power.

“Our biggest worry is that establishing another policy is not going to address the core problems from within,” she says. “It’s just going to target people who look like me or communities like mine.”

They wrote that US “history is littered with examples of initiatives sold as being necessary to fight extremism that quickly devolve into tools used for the mass violation of the human and civil rights of the American people”.

The House Un-American Activities Committee dismissed investigations into the Ku Klux Klan to target alleged communists. Rather than dismantle the re-emergence of the KKK and racist violence, the FBI’s harmful legacy of Cointelpro operations attacked Black Americans.

Post-9/11 measures under the newly formed Department of Homeland Security sought to prevent similar attacks but developed unprecedented domestic surveillance measures. The Trump-era Justice Department sought felony convictions for left-wing and Black Lives Matter demonstrators rather than tackle police brutality at the heart of the protests.

The Capitol riots also revealed a growing number of law enforcement officers and military personnel and veterans who participated in the rally that preceded the insurrection, resulting in more than a dozen suspensions and internal and FBI investigations, as well as federal charges against at least two officers.

“I feel very much that the reason that the threat posed by [white supremacist groups] hasn’t already been adequately addressed under current powers and current law is because of a deeply ingrained unwillingness, and a hesitation on part of all three branches of the government, including law enforcement, the Justice Department, the FBI, national security and other intelligence agencies,” Congresswoman Tlaib tells The Independent.

Last year, FBI director Christopher Wray told the House Judiciary Committee that the threat of far-right domestic violent extremism had risen to a “national threat priority” and will continue to pose a “steady threat of violence and economic harm” to the US as long as its underlying drivers – including “perceptions of government or law enforcement overreach, sociopolitical conditions, racism, antisemitism, Islamophobia, and reactions to legislative actions” – persist.

Critics have also condemned the role of federal law enforcement under the former president, who asserted a false equivalency between protesters and political dissidents and a far-right attempt to seize the halls of Congress.

Congresswoman Tlaib says: “They had bombs. They erected a noose to hang the vice president of the United States. They were chanting and looking for Speaker Pelosi. They left human faeces throughout the hall. They did so many outrageous things directed at, ‘This is how we feel about the United States of America’. They’re a threat from within.”

More than 100 civil rights and human rights organisations led by the Leadership Conference on Civil and Human Rights have also joined the effort.

“The government’s inadequate response to rising white nationalism is a disgraceful policy failure,” said Wade J Henderson, interim president and CEO of the LCCHR. “The problem is hardly new, and prosecutors have long had a multitude of criminal statutes at their disposal to confront white supremacist violence,” he said in a statement.

“The time is overdue to refocus resources, implement prosecutorial guidance, and prioritise combatting white nationalism as the grave threat that it is. Congress can support these efforts, not by passing additional counterterrorism laws, but instead by enforcing existing laws and using its formidable oversight and appropriations authority to demand a more effective response from federal law enforcement agencies.”

Congresswoman Tlaib has urged Congress to open an investigation into the Capitol attack, including introducing witnesses and testimony from lawmakers and Capitol Police officers who were there.

Investigations may also reveal the role of lawmakers who fed into the lies amplified by the president, only to defend their opposition to the results of the 2020 election as a way to ensure “election integrity” despite their refusal to condemn false claims of fraud.

“I just want that opportunity to bring it to light, put it into congressional record,” Ms Tlaib says. “A lot of people are making assumptions right now about what we need without doing a complete overhaul and investigation of the very people that were targeted, the people who were there. … It’s very important [to] have an effective and efficient investigation into this before we start passing legislation on something we have no information on.”

Investigations can also uncover the role of social media platforms and the entities that supported the rioters, including potential sources of funding and organisations that benefit from spreading misinformation that fuelled the violence, she says.

“Someone is benefitting from weakening our country, benefitting from feeding this misinformation to people,” Congresswoman Tlaib says. “I don’t know why we’re not applying the same thorough investigation and really looking at this. I’m not going to allow people to continue to guess. That’s irresponsible. … I don’t feel like we’re going to find an answer until we dig deeper into the full investigation. That’s the only way we’re going to be more informed and more thoughtful into how we approach this.”