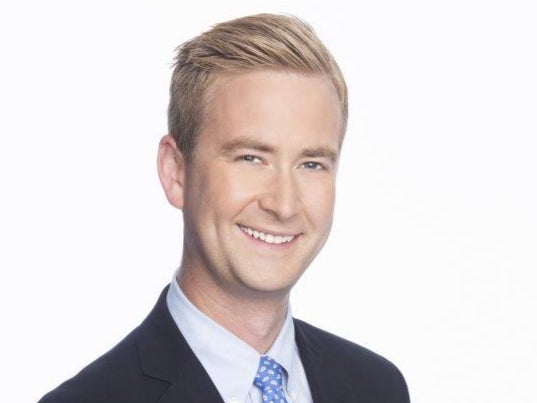 Peter Doocy: Who is the Fox reporter and thorn in Biden’s side?

There were so few press conferences during the Trump administration that at one point the podium in the press briefing room was literally gathering cobwebs. The Biden administration has resumed regular press briefings, and no journalist so far has made more of an impression in the Brady Briefing Room than Fox News’s Peter Doocy. He’s quickly developed a reputation for asking the president awkward questions — and occasionally provoking mildly annoyed responses from top officials.

Still, it’s worlds away from the tense media relationship with the last White House, where the president wrote off all but the most fawning coverage on Fox and Newsmax as “fake news,” and a perhaps preview of a new dynamic in Washington.

Here are some of Mr Doocy’s most memorable exchanges so far.

One early indication that a more open dialogue was coming back could be found in Doocy’s exchange with White House Press Secretary Jen Psaki over coronavirus travel bans. On Monday, the Biden administration banned noncitizen travel from South Africa, and extended similar bans from the Trump administration on nations like Brazil, Europe, and Britain over new, highly contagious coronavirus variants.

“When president Trump was imposing travel restrictions in March, specifically on China then candidate Biden called it ‘xenophobic’ and ‘fear-mongering,’” the Fox White House correspondent asked. “Now, President Biden is putting travel restrictions on people coming in from other countries. What word do we use to describe that?”

The press secretary responded that the question wasn’t quite a “fair articulation,” arguing Mr Biden opposed the Muslim travel ban, which he recently overturned, as xenophobic, and had criticised the previous president’s coronavirus bans on travel from China as an incomplete and stigmatising solution.

In another exchange on Monday about coronavirus, Mr Biden acknowledged the hard-nosed reporter’s style directly. After a question about whether the president could live up to his campaign promises that he would tackle the pandemic in short order, Mr Biden said, “I know he always asks me tough questions, and he always has an edge to them, but I like him anyway,” before saying he wasn’t overselling his ability to tackle Covid.

Yet another memorable moment came a day later on Tuesday.

As Mr Biden was walking away, after signing executive orders aimed at addressing racial inequity, Doocy shouted out, “Mr President, what did you talk to Vladimir Putin about?” following news that the leaders had a recent phone call. Mr Biden responded, “You. He sent his best.”

The president seemed a bit peeved at the question, but fellow White House journalists at the Washington Post and New York Times thought it was fair.

Things got off to a testy start almost instantly between the reporter and the administration, after Doocy peppered the press secretary with questions over why the Biden family wasn’t masked at inauguration festivities, despite Mr Biden’s repeated calls to mask up and a federal order requiring masks on federal property.

“I think we have bigger issues to worry about at this moment in time,” Ms Psaki said.

Doocy was named White House correspondent for the network earlier this month. He’s the son of Steve Doocy, co-host of Fox News’s Fox and Friends, perhaps President Trump’s favourite show on the network before he eventually disavowed Fox for reporting that Mr Biden was winning the election.

The young Doocy is no stranger to asking memorable questions.

In 2008, as a student at Villanova University, he asked John McCain, on campus for a speech, whether he wanted to get a shot of whiskey together once the event was over.

“He paused and had this great reaction. He collected himself, and he eventually came around to saying that it was one of the two best questions he had heard in the entire campaign. As a college junior, this was so cool to hear,” Doocy told the Villanova alumni magazine.

The last four years of interactions between the press and the president have been downright toxic, with the White House relentlessly attacking journalists as dishonest and the “enemy of the people,” while often going weeks or months without the president and top officials taking formal questions. Mr Trump also regularly singled out female journalists of colour for abuse as “stupid” and “nasty,” and the White House briefly banned CNN journalist Jim Acosta, who had a habit of asking hard questions of Press Secretary Sarah Huckabee Sanders that would later go viral.

The president kept on attacking the press right up until his speech to the rioters who eventually stormed the Capitol on 6 January, lambasting his favourite target, the “fake news media,” who wouldn’t affirm his outright lie to his supporters that he won the election but for a rigged process.

The Biden administration has promised to bring “trust and transparency back to the briefing room.”

The federal government also seized journalists’ communications without notice for national security reasons, and surveilled a Fox News journalist it argued was a “co-conspirator” for receiving leaked information, a move the New York Times editorial board wrote in 2013  was “beyond protecting government secrets to threatening fundamental freedoms of the press to gather news.”

0 0 0 0
Previous : Walgreens taps Starbucks exec Brewer as its new CEO Walgreens executive Starbucks CEO woman
Next : UK ‘Covid’ death toll passes 100,000 they tell you – what absolute nonsense and mendacity. These are people who died from all causes within 28 days of testing positive with a test not testing for the ‘virus’. Now THAT’S the truth – David Icke