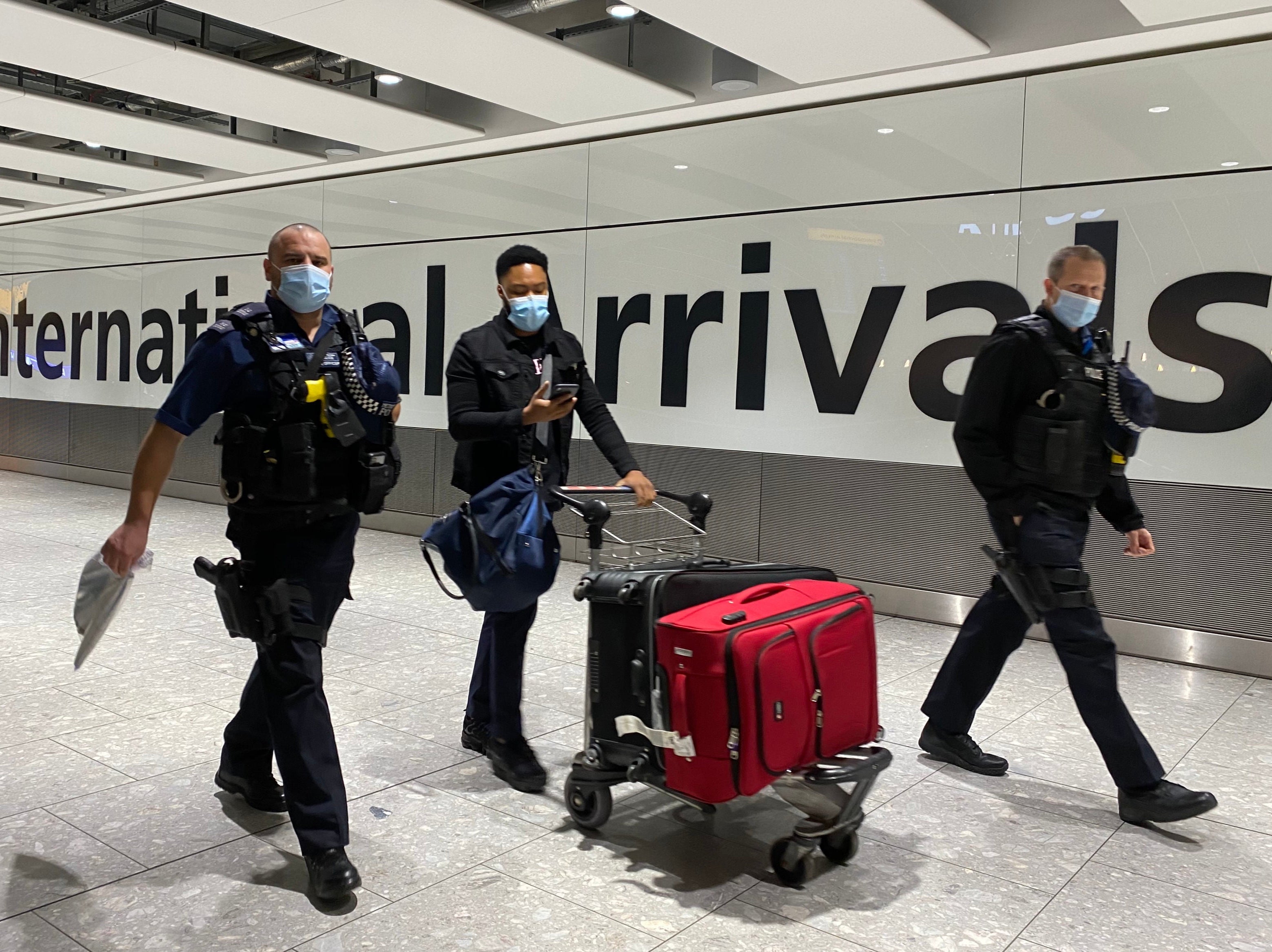 The government is expected to announce plans for Britons to pay for hotel quarantine when returning from 30 high-risk countries to prevent coronavirus variants from entering the UK.

Home secretary Priti Patel will set out the new rules in the House of Commons on Wednesday after Labour leader Sir Keir Starmer called for it to be compulsory for every traveller arriving in the UK to quarantine in a hotel.

The quarantine list is expected to include countries where new variants of the disease have been identified such as South Africa, South America, Portugal and Cape Verde, according to The Times.

Separately, Boris Johnson has reportedly rejected Ms Patel’s calls for a temporary closure of borders to protect against importing the variants.

The prime minister on Tuesday offered his “deepest condolences” to those who have lost relatives to coronavirus as the UK’s death toll surpassed 100,000.

“It’s nothing more than a national tragedy. A terrible reminder of what we’ve lost as a country an awful reminder that we have one of the worst death tolls in the world,” he said in a video.

“Every day we see the numbers, but they’re not just statistics. Every death is a mother, a father, a sister or a brother, it’s a friend, a neighbour, a partner or a colleague. It’s an empty chair at the kitchen table.

“We can never and we will never forget those that we have lost. And to those that are mourning, we must promise to learn the lessons of what went wrong.”

Councils should be able to offer financial incentives to get tested for coronavirus, and have the power to enforce isolation rules, Dr Richard Harling told MPs.

The director of health and care from Staffordshire County Council told the Science and Technology Committee: “There has been quite a lot of speculation recently that going to have a test is not something people have an incentive to do. If you test positive you have to isolate which is disruptive to your life.”

He said councils should have the ability to offer “financial inducement” to get tested, to “encourage people to come forward if they have symptoms, or even if they don’t”.

Opinion: People with learning disabilities should be prioritised for vaccine

University of York researcher and lecturer Ian Hamilton takes a look at whether people with a learning disability should be prioritised for a coronavirus vaccine in this piece for Indy Voices.

NHS Test and Trace “not as responsive” as hoped

NHS Test and Trace is “not as responsive” as hoped, a director of public health has told MPs.

Dr Richard Harling, from Staffordshire County Council, told the House of Commons Science and Technology Committee: “The relationship with NHS Test and Trace has improved over the last few months but they are still relatively remote. We don’t have well-developed relationships with, for example, a local account manager, which would be someone we can turn to with issues or problems.

“Again if residents raise issues or queries with NHS Test and Trace there is quite a long chain of command for it to go all the way up and then for the answer to come all the way back down.

“It is perhaps not as responsive yet as we would like to see it.”

How Covid survival rates have improved

Dexamethasone has reportedly become the “backbone” of the hospital treatment of patients with Covid-19.

The cheap steroid was found to reduce death rates by up to one third among some hospital patients.

Ella Pickover takes a closer look in this article:

The bosses of Britain’s biggest airlines have written to the prime minister demanding “an urgent roadmap for the reopening of air travel”.

Chief executives including Sean Doyle of British Airways, Johan Lundgren of easyJet and Shai Weiss of Virgin Atlantic are dismayed at the prospect of extending travel restrictions to include hotel quarantine.

Prime minister Boris Johnson will make a Commons statement on Covid-19 this afternoon.

The statement will replace one scheduled to have been made by health secretary Matt Hancock at about 1.15pm.

AstraZeneca ‘pulls out of EU meeting’

AstraZeneca has pulled out of a meeting with the European Union today to discuss Covid-19 vaccine supplies, an EU official said.

The official added that the EU keeps asking the company to provide further explanations about its announcement to cut vaccine deliveries to the EU in the first quarter.

People with a positive test for Covid-19 that is compatible with the new UK variant are less likely to report a loss of taste and smell, figures suggest.

They are more likely to report “classic” symptoms of the virus, such as a cough and a fever.

The provisional findings were published by the Office for National Statistics (ONS), based on the regular Covid-19 infection survey of people in private households in England.

There was no evidence of difference in the percentage of people reporting gastrointestinal symptoms such as nausea and vomiting.

Symptoms were self-reported and not professionally diagnosed, and cover the period November 15 to January 16.