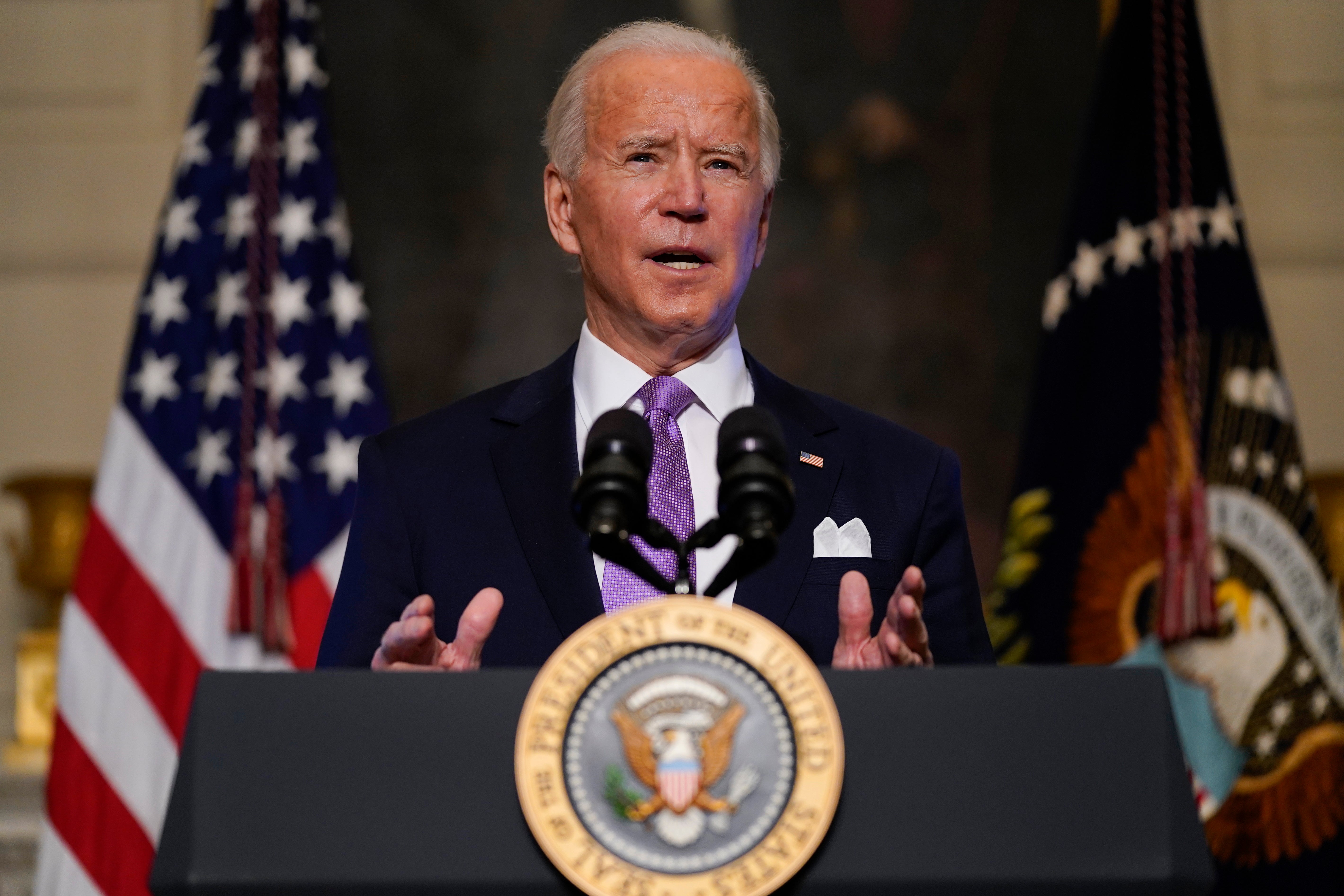 Joe Biden is signing three executive actions on Wednesday designed to tackle the climate crisis, including one order pausing new oil and gas leases being granted on federal lands, another directing the government to acquire electric vehicles and a third formally establishing an office of domestic climate policy under John Kerry and Gina McCarthy.

A new Morning Consult poll has meanwhile found that Mr Biden’s predecessor, Donald Trump, remains popular within the Republican Party, with 50 per cent of respondents saying he should play a significant role in the GOP’s future. A huge 81 per cent of those surveyed said they still held a positive opinion of him, even after the Capitol riot.

Their party lost a vote in the Senate on Tuesday seeking to block Mr Trump’s upcoming impeachment trial as “unconstitutional”, given that he is no longer in office, but the ballot appeared to confirm the contention of Kentucky’s Rand Paul that the matter is “dead on arrival”, with insufficient GOP support to convict the 45th president for inciting insurrection.

The Department of Homeland Security issued a bulletin warning of anti-government violence following the election of Joe Biden.

While not citing a specific threat, the bulletin said a heightened threat environment would persist across the United States based on “ideologically-motivated violent extremists with objections to the exercise of governmental authority and the presidential transition.”

“The Acting Secretary of Homeland Security has issued a National Terrorism Advisory System (NTAS) Bulletin due to a heightened threat environment across the United States, which DHS believes will persist in the weeks following the successful Presidential Inauguration. Information suggests that some ideologically-motivated violent extremists with objections to the exercise of governmental authority and the presidential transition, as well as other perceived grievances fueled by false narratives, could continue to mobilize to incite or commit violence.”

The US can’t impact climate change by lowering its own emissions alone, says John Kerry

The Special Presidential Envoy for Climate John Kerry said today that the Paris Climate Accord is not enough to make an impact, and that 90 per cent of emissions occur outside the United States.

“We could go to zero tomorrow and the problem isn’t solved,” Kerry says.

Special Presidential Envoy for Climate John Kerry, and National Climate Advisor Gina McCarthy, are on board today deliver to discuss the challenges of climate change.

CDC Director says anaphylaxis reaction to Covid as low as 2-in-million as US vaccinates record 1.6m per day

Anaphylaxis reactions to the Covid-19 vaccine have been a concern among Americans as health experts work to boost public confidence in the jab.

But Dr Rochelle Walensky, the director of the Centres for Disease Control and Prevention (CDC), revealed that anaphylaxis reactions to the Covid-19 vaccine have occurred in only  “2.1 to 6.1 cases per million”.

The leader of the Proud Boys, Enrique Tarrio, was previously working for federal and local investigators as an undercover informant, according to Reuters.

In an investigation of Tarrio’s past arrest in 2012, the outlet found transcripts of court proceedings and spoke to a former prosecutor that described his undercover work for the Federal Bureau of Investigation.

In a 2014 hearing in Miami, Tarrio’s lawyer, a prosecutor, and an FBI agent all said he helped authorities prosecute more than a dozen people in cases of drugs, gambling and human smuggling.

In an interview with Reuters, Tarrio denied the report. I don’t know any of this,” he told Reuters when asked about the transcript. “I don’t recall any of this.”

The former federal prosecutor in Tarrio’s case, Vanessa Singh Johannes, contradicted his denial in a statement to the outlet: “He cooperated with local and federal law enforcement, to aid in the prosecution of those running other, separate criminal enterprises, ranging from running marijuana grow houses in Miami to operating pharmaceutical fraud schemes.”

The “Office of the Former President” has started rolling out statements, with its first an endorsement of Donald Trump’s former spokeswoman for Governor of Arkansas.

Sarah Huckabee Sanders shared the endorsement on Twitter late Monday. In the statement, Trump said Sanders was a “warrior” who will fight for the people of Arkansas.

“Sarah is strong on borders, tough on crime and fully supports the second amendment and our great law enforcement officers,” Trump said. “She loves our military and veterans — and her home state of Arkansas. She will be a GREAT Governor and she has my complete and total endorsement.”

Pat Leahy back presiding over Senate after health scare

The Vermont Democrat, 78, is back at his post today after causing a stir when he taken ill last night.

Here’s a nice piece by Greg Evans for Indy100 on the old gent’s surprise love of all things Batman and his regular movie cameos.

Republican House minority leader Kevin McCarthy will speak with Marjorie Taylor Greene about the series of inflammatory social media posts from before she took office that came to light this week (and which I mentioned earlier).

I’m sure that’ll be a real ticking off.

Oliver O’Connell has the details.

US could make Covid tests mandatory for domestic air travel

The Biden administration is “actively looking” at making Covid-19 testing mandatory for US domestic flights, amid the ongoing coronavirus pandemic.

Dr Marty Cetron, director for the Division of Global Migration and Quarantine at the Centres for Disease Control and Prevention, was asked by reporters on Tuesday if new domestic travel requirements would be implemented under President Biden’s administration.

He replied that there are “conversations that are ongoing and looking at what the types and locations of testing might be” and added: “We’re actively looking at it.”