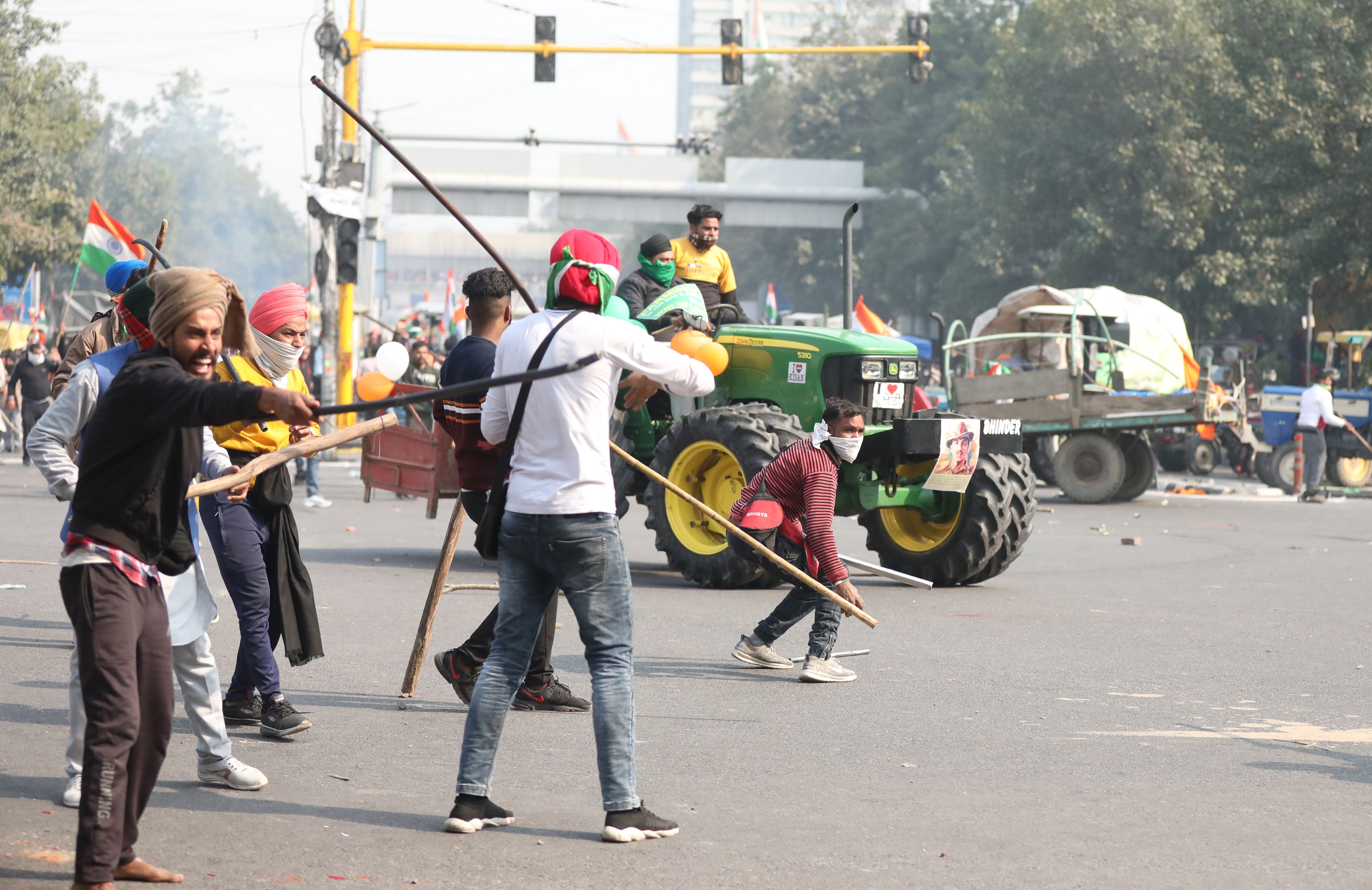 At least one person has died as protesting farmers breached barricades in central Delhi, climbing the ramparts of the city’s historic Red Fort and clashing with police.

Delhi police used tear gas and baton charges against the thousands of demonstrators, who had entered the capital’s outskirts for a planned march to mark India’s Republic Day before many deviated from the agreed route.

The farmers have been protesting outside Delhi for more than two months, demanding the reversal of government reforms designed to open up the agricultural sector to market forces.

Camps full of farmers from the rural northern states of Punjab and Haryana have occupied large stretches of several national highways entering the capital, causing weeks of significant traffic disruption.

The authorities agreed to allow Tuesday’s tractor parade to enter the capital after rounds of negotiations – and an offer from the government to suspend the new laws for 18 months for consultations – failed to sway the powerful farmers’ unions, which are demanding nothing short of a complete repeal of the reforms.

Union leaders told reporters that more than 10,000 tractors were involved in the protest and that most farmers had stuck to the agreed protest route, designed to keep them away from the traditional Republic Day parade through the centre of the city.

But they admitted several groups had deviated towards central areas, clashing with police at various points including the central ITO metro station, which was a focal point of some of the worst violence.

A bus was vandalised before police responded with tear gas and baton charges, and one protester died when, according to the Indian Express newspaper, he crashed his tractor after police opened fire with warning shots.

At least one police officer was also injured as the authorities tried to keep protesters from entering and occupying the Red Fort, a major landmark. There was outrage on some right-leaning news channels after a protester raised a flag at the fort, with India Today comparing it to the hoisting of the Confederate Flag at the US Capitol during the 6 January riots in Washington.

The home ministry of prime minister Narendra Modi’s government, which is responsible for security in the capital, has now imposed a ban on internet services in several border areas of the capital in an effort to stop protest leaders from coordinating.

Samyukt Kisan Morcha, a body representing a number of major farmers’ unions, distanced itself from the violence in a statement that claimed those deviating from the route did not represent the majority of farmers.

“None of the leaders disappeared,” a statement said. “They are following the set routes.”

Tuesday’s escalation in unrest coincides with the fact that some in the farmers’ movement feel their months-long sit-in outside the capital is being ignored. Those entering the city by car can still do so, via short detours that have sprung up through villages off the main highways, trucks and two-wheelers alike being guided by freshly painted “To Delhi” signs.

There has been seemingly no progress in talks to settle the dispute, as the government continues to insist that its reforms will benefit farmers in the long run, allowing them to bypass wholesale middlemen and sell their wares across the country.

The farmers say that the reforms will allow big corporations to profit from their hard work, and ultimately remove the security they have in the form of a guaranteed minimum price the government pays for their produce.

Sukhdev Singh, 55, a farmer from Punjab who was among hundreds who broke away from the main route, told Reuters: “Modi will hear us now, he will have to hear us now.”

“We want to show Modi our strength,” said Satpal Singh, a farmer who drove into the capital on a tractor along with his family of five. “We will not surrender.”

Agricultural jobs support more than half of India’s population of at least 1.3 billion people, and farmers represent an important vote bank in every election.

But their economic clout has also diminished in the past three decades, now only accounting for some 15 per cent of the country’s £2.1 trillion economy.

Mr Modi has tried to ease farmers’ fears by insisting their concerns are unfounded, and has repeatedly accused opposition parties of agitating them by spreading rumours. Some leaders of the ruling BJP have called the farmers “anti-national”, a label widely used to dismiss and discredit any who criticise the government or its policies.

Devinder Sharma, an agriculture expert who has spent the past two decades campaigning for income equality for Indian farmers, said they were not only protesting against the reforms but also “challenging the entire economic design of the country”.

“The anger that you see is compounded anger,” he said. “Inequality is growing in India, and farmers are becoming poorer. Policy planners have failed to realise this and have sucked the income from the bottom to the top. The farmers are only demanding what is their right.”