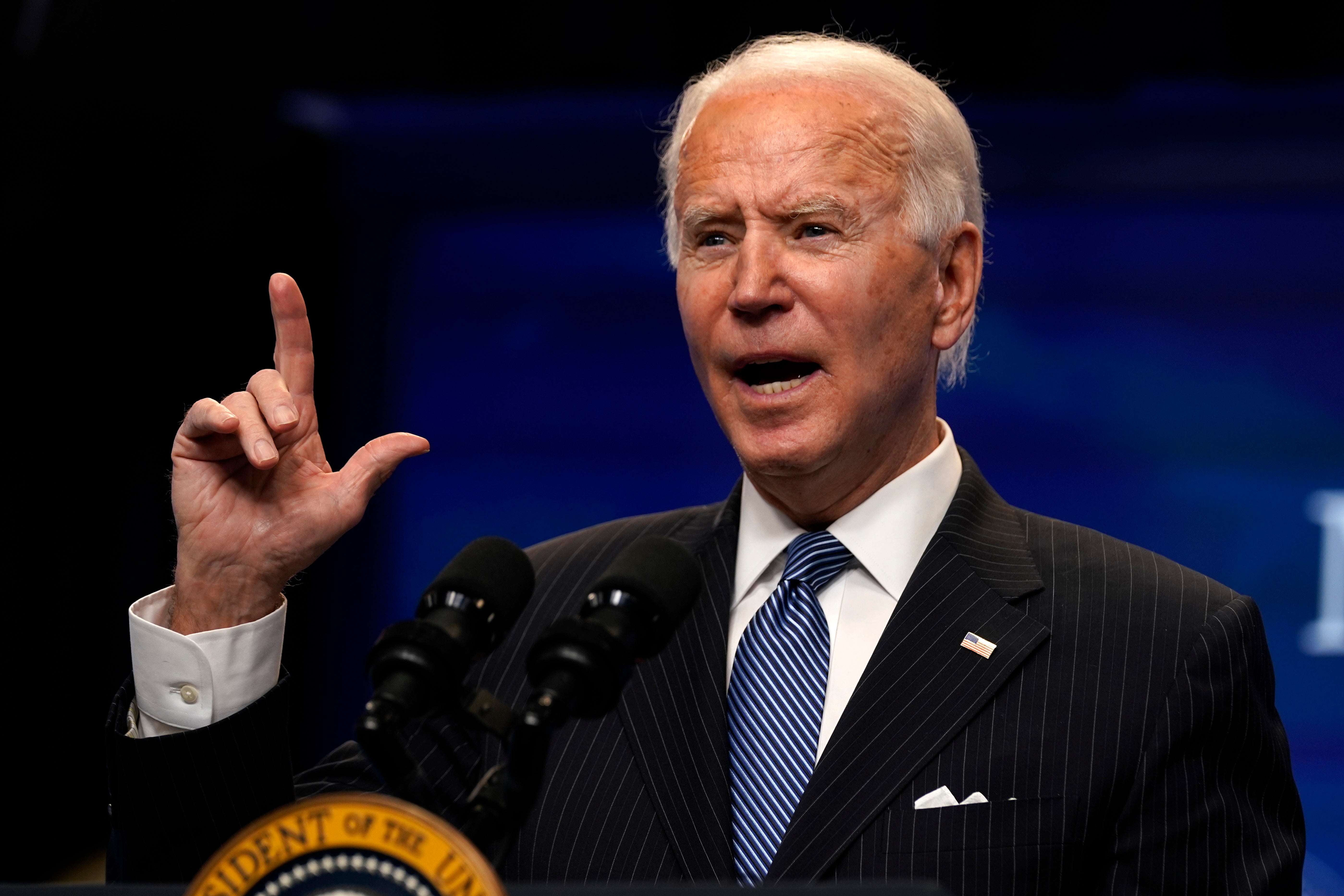 Joe Biden has said that the Senate impeachment trial of his predecessor, Donald Trump , “has to happen” but expressed doubts that 17 Republicans could be found to secure the two-thirds majority in the chamber needed to convict the 45th president of “incitement to insurrection” over the Capitol riot earlier this month.

The new president has meanwhile scored a 63 per cent approval rating in his first such poll as president, with the majority of registered voters surveyed by Hill-HarrisX backing him after a busy first week in the Oval Office following his inauguration.

Mr Biden has also raised the bar to suggest the US could soon be administering 1.5m coronavirus vaccinations a day. “I think with the grace of God, the goodwill of the neighbour and the creek not rising, as the old saying goes, I think we may be able to get that to 1.5m a day, rather than 1m a day,” he said at a White House briefing on Monday.

My Pillow CEO Mike Lindell has been permanently banned from Twitter after he continued to perpetuate the baseless claim that Donald Trump won the 2020 US presidential election.

Mr Lindell has been one of Mr Trump’s most public supporters over the last four years and has often parroted conspiracy theories spread by the president and his followers.

The 46th US President has sent his first tweet of the day saying the nation has never lived up to its founding promise of “equality for all.”

The short tweet is a world away from his predecessor’s social media rants that often included broadsides at the media or settling personal scores.

Instead Joe Biden is setting the scene for his administration’s announcements today on its racial equality agenda.

The tweet says: “America has never lived up to its founding promise of equality for all, but we’ve never stopped trying. Today, I’ll take action to advance racial equity and push us closer to that more perfect union we’ve always strived to be.”

It comes just a day after Mr Biden reversed Donald Trump’s ban on transgender people serving in the armed forces.

Trump’s former White House press secretary is planning a return to office to fight for an office once held by her father.

For Indy Voices, Hannah Selinger offers this timely take down.

The Missouri Republican senator continues to cast him as the real victory of the attempted coup on 6 January, which cost him a book deal.

The new man is off to a good start, according to a newly released Hill-HarrisX poll, which sees his first presidential job approval rating come in at 63 per cent among registered voters,

Only 37 per cent of respondents in the survey, which was carried out between 21-22 January said that they disapproved of Biden’s job in the White House so far.

An overwhelming 94 per cent of Democrats approved of the newly inaugurated president during his first few days in office, along with 62 per cent of independents.

But, unsurprisingly, 70 per cent of Republican voters disapprove of his performance so far as the 46th president.

Garret Miller, 34, now says he is “ashamed of his comments” after writing “Assassinate AOC” on Twitter (alluding to New York progressive Democrat Alexandria Ocasio-Cortez) and also threatening to hang the Capitol Police officer who shot a female rioter on 6 January.

The administration is reviving efforts to honour abolitionist Harriet Tubman by placing her on new $20 bills, after Donald Trump delayed the move.

“I was here when we announced that, and it was very exciting, but it hasn’t moved forward yet, which we would have been surprised to learn at the time,” said Jen Psaki.

“The Treasury Department is taking steps to resume efforts to put Harriet Tubman on the front of the new $20 notes.

“It is important that our notes, our money, reflect the history and diversity of our country and Harriet Tubman’s image gracing the new $20 note would certainly reflect that and we are exploring ways to speed up that effort.”

Graeme Massie has more on this.

The Biden administration has responded to Florida Republican governor Ron DeSantis’ criticism of the new president’s plan to have the federal government open up 100 mass vaccination sites across the country.

“I would use all that energy and I would put that towards more supply of the vaccine,” DeSantis said at a news conference over the weekend.

“The president is a pretty even-keeled guy, so I would say he doesn’t have much of a reaction other than he wants to ensure the vaccine is distributed to people across the country, including, of course, the millions of people living in Florida,” she said.

The new Senate majority leader, Chuck Schumer, told MSNBC’s Rachel Maddow last night that Trump’s upcoming impeachment trial “will be done in a way that is fair but… relatively quickly.”

“I don’t think there’s a need for a whole lot of witnesses,” he added, suggesting the facts of the Capitol riot speak for themselves.

He was also unstinting in his attack on Biden’s predecessor.

It has meanwhile been decided that the Senate’s longest-serving Democrat, Pat Leahy, will chair proceedings.

Trump opens ‘Office of the Former President’ in Florida

The 45th president, presumably already kicking his heels at Mar-a-Lago and boring the pool boy sideways with false claims about how the election was “stolen” from him, has issued his first press release as ex-commander-in-chief, a poor substitute for his once-buzzing Twitter account.