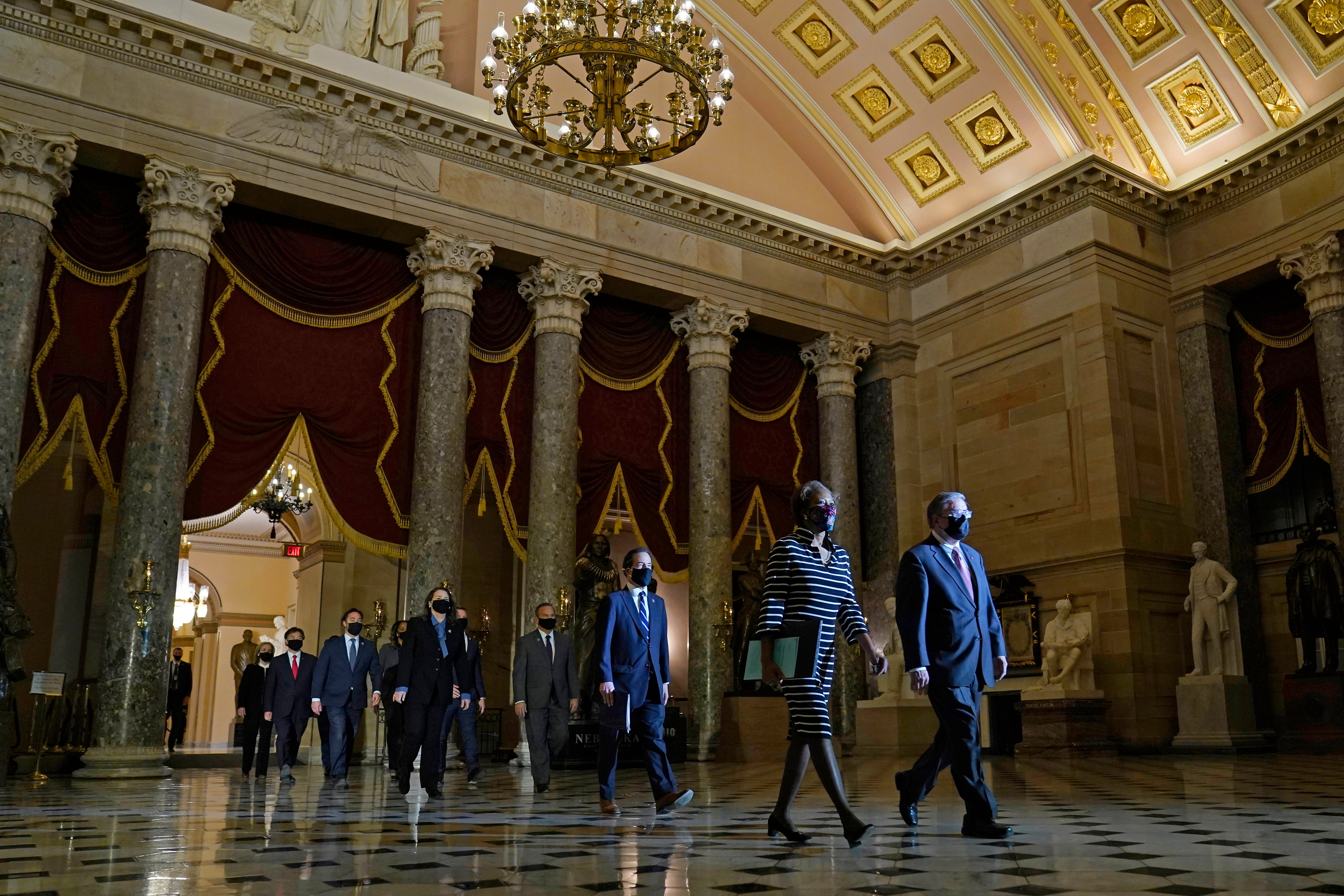 CAPITOL BREACH-GETTING CAUGHT — In dozens of cases on social media, Trump supporters flaunted their activity on the day of the Capitol insurrection. Some, apparently realizing they were in trouble with the law, deleted their accounts only to discover their friends and family members had already taken screenshots of their selfies, videos and comments and sent them to the FBI. By Michael Balsamo, Alanna Durkin Richer and Colleen Long. SENT: 1,070 words, photos.

TRUMP-IMPEACHMENT — Democrats have hand-delivered the impeachment case against Donald Trump to the Senate for his historic trial, but Republican senators are easing off their criticism of the former president and shunning calls to convict him over the deadly riot at the U.S. Capitol. It’s an early sign of Trump’s enduring sway over the party. By Mary Clare Jalonick and Lisa Mascaro. SENT: 920 words, photos, video. With TRUMP-IMPEACHMENT-LAWYER — Lawyer group: Trump adds ex-prosecutor to impeachment team.

UNITED STATES-RUSSIA — President Joe Biden has been quickly thrown into a high-wire balancing act with Russia as he seeks to toughen his administration’s stance against Vladimir Putin while preserving room for diplomacy in a post-Trump era. A U.S. official says Biden plans to speak to Putin by phone as early as Tuesday. By Diplomatic Writer Matthew Lee. SENT: 870 words, photos. Also see BIDEN below.

CHINA-US-TRADE-WAR — The U.S.-Chinese trade war isn’t going away under Biden. Biden won’t confront Beijing right away, economists say, because he wants to focus on the coronavirus and the economy. However, the Democrat looks set to renew pressure over trade and technology grievances that prompted Trump to hike tariffs on Chinese imports in 2017. By Business Writers Joe McDonald and Paul Wiseman. SENT: 1,190 words, photos.

BIDEN-IMMIGRATION-BATTLE-AHEAD — Immigrant rights activists energized by a new Democratic administration and majorities on Capitol Hill are gearing up for a fresh political battle to push through a proposed bill from Biden that would open a pathway to citizenship for up to 11 million people. SENT: 1,020 words, photos. By Anita Snow and Manuel Valdes.

VIRUS-OUTBREAK-PORTUGAL — In the first week of December, Portugal’s prime minister gave his pandemic-weary people an early Christmas gift: restrictions on gatherings and travel due to COVID-19 would be lifted from Dec. 23-26 so they could spend the holiday season with family and friends. Soon after those visits, the pandemic quickly got out of hand. By Barry Hatton. SENT: 980 words, photos.

VIRUS-OUTBREAK-CALIFORNIA — Business owners hailed Gov. Gavin Newsom’s decision to lift stay-at-home orders across California in response to improving coronavirus conditions, but local health officials expressed concern that it may cause residents to let down their guard. SENT: 1,010 words, photos, video.

VIRUS OUTBREAK-SOUTH AFRICA-MUSLIM BURIALS — Not even the full protective gear can mask the respect with which the men wash the body of a newly deceased member of their Muslim community in South Africa. SENT: 760 words, photos.

VIRUS-OUTBREAK-ASIA — Health authorities in Taiwan are quarantining 5,000 people while looking for the source of two new coronavirus cases linked to a hospital. SENT: 530 words, photos. With VIRUS-OUTBREAK-THE LATEST.

BIDEN — Biden appears to be boosting his goal for coronavirus vaccinations, suggesting the nation could soon be vaccinating 1.5 million Americans on average per day. SENT: 990 words, photos, video.

INDIA-REPUBLIC DAY — Tens of thousands of farmers drove a convoy of tractors into the Indian capital as the nation celebrated Republic Day in the backdrop of agricultural protests that have grown into a rebellion and rattled the government. SENT: 780 words, photos.

BALKANS-WASTE-LAKE — Serbia and other Balkan nations are overwhelmed by communal waste after decades of neglect and lack of efficient waste-management policies in the countries aspiring to join the European Union. SENT: 630 words, photos.

UNITED NATIONS-HOLOCAUST REMEMBRANCE — Secretary-General Antonio Guterres urged coordinated global action to build an alliance against the growth and spread of neo-Nazism and white supremacy and the resurgence of xenophobia, anti-Semitism, and hate speech sparked partly by the COVID-19 pandemic. SENT: 510 words, photo.

KOREAS-DIPLOMAT-DEFECTION — A North Korean diplomat who served as the country’s acting ambassador to Kuwait has defected to South Korea, according to South Korean lawmakers who were briefed by Seoul’s spy agency. SENT: 820 words, photos.

JEFFREY EPSTEIN-ASSOCIATE — A British socialite charged with recruiting teenage girls for financier Jeffrey Epstein to sexually abuse in the 1990s asked a judge to dismiss the case on multiple grounds, including that a deal years ago not to prosecute Epstein and others should shield her from prosecution. SENT: 510 words, photo.

FINANCIAL MARKETS — Shares fell in Asia on renewed worries that troubles with COVID vaccine rollouts and the spread of new variants of coronavirus might delay a recovery from the pandemic. By Business Writer Elaine Kurtenbach. SENT: 600 words, photos.

AROUND THE NBA — Kobe Bryant’s legacy may be stronger than ever as Tuesday marks one year since the helicopter crash that took the lives of Bryant, his daughter Gianna and seven other people. By Basketball Writer Tim Reynolds. SENT: 780 words, photos. With KOBE BRYANT-PHOTO GALLERY.

0 0 0 0
Previous : Inside Politics: No 10 set to announce quarantine hotel plans
Next : Covid: No risk to delivery of Pfizer vaccine, minister insists, despite EU threat to impose export controls