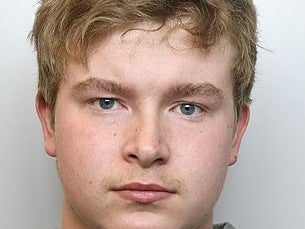 A farmer‘s son who murdered a schoolboy after paying more than £2,000 to stop him exposing the fact they had been having underage sex has been sentenced to life.

Matthew Mason, 20, admitted bludgeoning 15-year-old Alex Rodda to death with a wrench in woods in Cheshire, in December 2019.

He smashed his victim across the head and body at least 15 times before later going to meet friends at a nearby pub.

But he denied murder, arguing he experienced a loss of control after being blackmailed by the teenager.

The claims were rejected by a jury at Chester Crown Court earlier this month who found him guilty of murder by a majority verdict.

Now, at a sentence hearing on Monday, he was told he would spend a minimum 28 years in custody.

Judge Steven Everett said: “This was a pre-meditated murder, carefully planned and, in my judgment, ruthlessly carried out showing no empathy for your victim and a callous disregard for his family and friends.”

He added that Mason, from the Cheshire village of Ollerton, was “much more worldly wise” than his victim who was young and immature for his age.

He told him: “Although I accept Alex Rodda may very well have initiated contact with you in the latter half of 2019, I am sure that you not only responded but actively encouraged a sexual relationship. You groomed him. It was not your first sexual experience but it was his.

“While it is clear that Alex Rodda naively, as I see it, demanded money from you, it must be firmly kept in mind that this all came about because of your sexual offending and you chose to behave in that way.

“You made a firm and clear decision to kill Alex Rodda some time in early December 2019. This was not something on the spur of the moment. You were hoping you would kill him and hide his body to make it look as if he simply decided to disappear.

“You went about it with a ruthlessness which utterly beggars belief for any person, let alone someone in their teens.”

The trial heard Alex had contacted Mason’s then girlfriend, Caitlyn Lancashire, in November 2019 and told her that he had been sending “flirty” messages as well as an explicit picture and video.

Mason, an agricultural engineer student who was a member of the Young Farmers, denied the allegations to his girlfriend but began making payments to Alex’s bank account shortly afterwards.

By the time of the school boy’s death, Mason had transferred more than £2,200 and was asking friends and family to borrow money, the court heard.

Messaged exchanged between the pair showed Alex appearing to threaten to post intimate pictures sent by Mason onto social media.

Giving evidence, the defendant admitted the pair had sex but said he thought that it was “wrong”.

Evidence showed the school boy, from Tabley, Cheshire, had been struck at least 15 times in what was described by the prosecution as a “brutal” attack after he was lured to woodland near the village of Ashley.

The court heard Mason left Alex unconscious at the scene and went to a friend’s farm to clean up and then to two pubs where he met friends.

He returned to the scene later that night and attempted to move the body but left it exposed wher ot was found by refuse workers the next day.

The then 18-year-old was arrested shortly afterwards. When police stopped him in his car, he had dried blood on his hands and fingers. A bin bag with his blood-stained green fleece, the wrench and Alex’s large padded jacket was found in the boot.

In a victim impact statement, Alex’s mother Lisa said: “When you lose a child in the most horrific and brutal circumstances as a parent you really do experience hell.

“My boy was raised in love, not fear. He did not have to wear a mask. I brought my son to be proud of who he was. He was 15, he was full of joy, inspiration, enthusiasm for life.

“He lived in love, he was raised in love. He brought joy and light wherever he went.”

Alex’s father Adam, said: “He was a fun-loving, respectful boy who always considered other people’s feelings. We will never get over the loss of our beautiful, loving boy.”