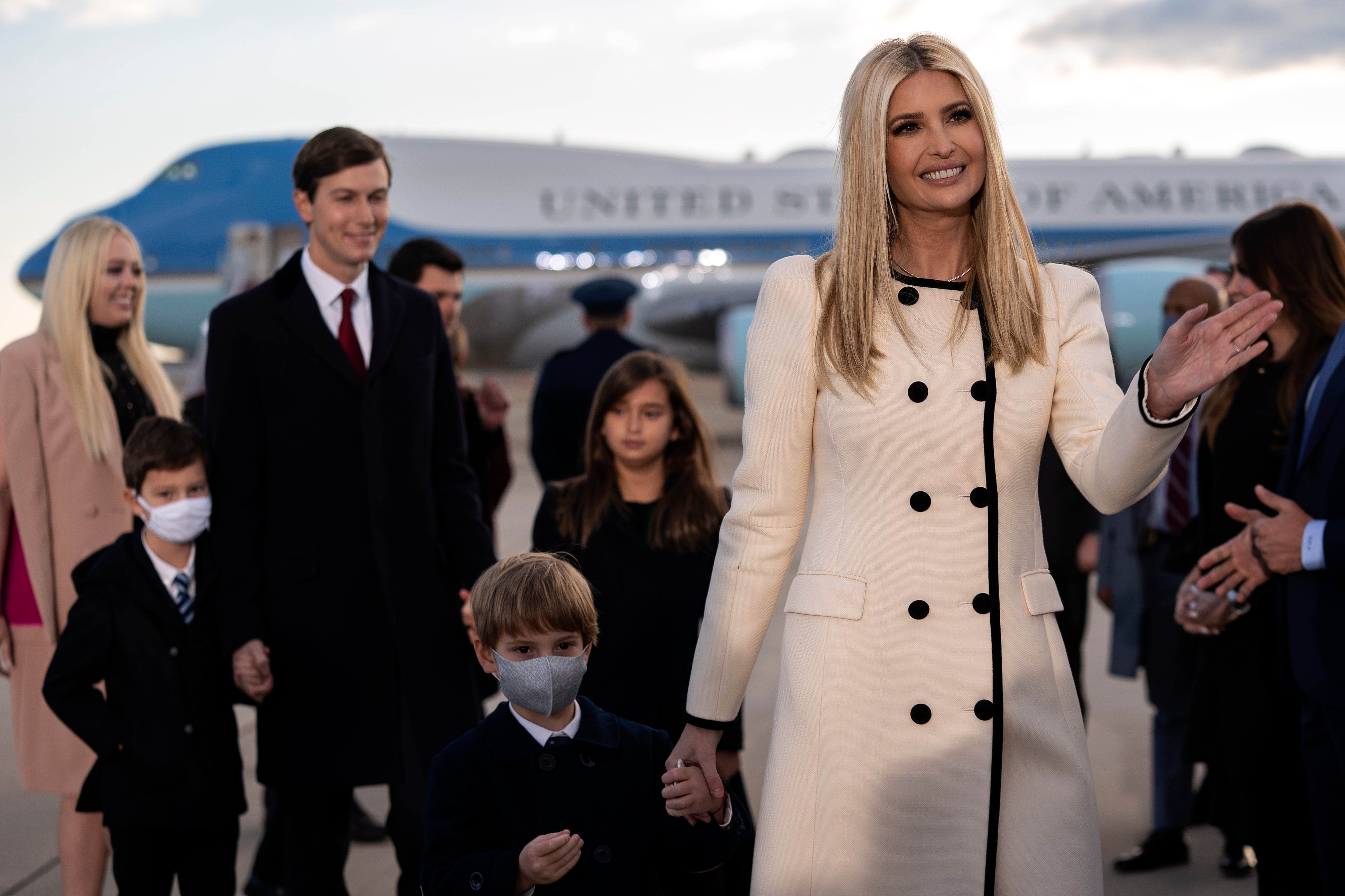 Ivanka Trump is remaining silent as rumours swirl about her own possible run for office.

The former first daughter, and adviser to Donald Trump during his presidency, last posted a message on Twitter and Instagram on 19 January saying that it had been “the honour of a lifetime to serve our nation”.

Her last public engagement was the former president’s farewell address at Joint Base Andrews before his final flight on Air Force One on 20 January.

At the small rally on the tarmac, Mr Trump thanked his family: “People have no idea how hard this family worked,” said Mr Trump. “They worked and they worked for you. They could’ve had a much easier life.”

Since then, Ms Trump has retreated from public view, but talk of her entering the world of politics with an aim to making the Trumps into a political dynasty is already gaining traction.

In the past Ms Trump has made no secret of her own political ambitions, and her family’s move to a luxury condominium in Miami could be seen as the next logical step.

Over the weekend Republican senator for Florida Marco Rubio shrugged off rumours that Ms Trump could challenge him to a primary in the 2022 midterm elections.

Ms Trump and her husband, Jared Kushner, who was also an adviser to the 45th president, recently acquired a $30m (£22m) lot of land on Indian Creek Island in Miami. They are planning to build a new home for themselves there, indicating their intention to stay on in the Sunshine State, where Mr Trump himself now resides at his Mar-a-Lago resort.

But speaking to Chris Wallace on Fox News Sunday, Mr Rubio brushed aside gossip that Ms Trump is eyeing his seat, suggesting he was more concerned by the prospect of a well-funded Democratic rival.

“I don’t really get into the parlor games of Washington,” he said.

“I don’t own the Senate seat,” he continued. “If I want to be back in the US Senate, I have to earn that every six years.”

Pushed on the matter, Mr Rubio responded: “I like Ivanka. We’ve worked very well together on issues … Anybody can decide to run if they want to … I would point to the last four years working with President Trump in the White House and I can tell you it’s probably been the most productive four-year period of any US senator from Florida in modern history.”

In the same interview, Mr Rubio mounted only moderate criticism of Mr Trump over the 6 January assault on the US Capitol by an enraged mob of his supporters who had been led to believe November’s election had been “stolen” from the Republican.

Five people were killed and more than 100 arrested in the ensuing melee that saw rioters break through police barriers, loot offices and vandalise federal property, with some reportedly plotting to kidnap or even murder lawmakers.

Mr Rubio argued that while the former president “bears responsibility” for the episode, he should not face a trial in the Senate – one is scheduled for 8 February – because holding him to account could further “stir up” the country.

Whatever lies ahead for President Trump, his daughter’s return to politics continues to be the subject of speculation.

“He’s calling people and trying to line them up saying Rubio is terrible, worthless, he’s probably going to lose, Ivanka is going to go there and we should all get together and pledge our support to her and get her to run,” a Republican fundraiser also told the site.

The idea has been further encouraged by Mr Trump’s former campaign manager Jason Miller, noting her frequent appearances at rallies like those in support of beaten Georgia Senate candidates Kelly Loeffler and David Perdue earlier this month.

“Ivanka only got into politics to help her father and help his agenda but what’s now clear is that Ivanka is a political powerhouse in her own right.” he said.

The president’s ex-chief strategist Steve Bannon has also championed Ms Trump, saying on a recent episode of his War Room podcast: “The second most fire-breathing populist in the White House was Ivanka Trump.

“I strongly believe and would strongly recommend that Ivanka Trump immediately … if she is not going to remain an assistant to the president, she should immediately file and run for the senate and primary Marco Rubio in Florida,” he added, citing Mr Rubio’s decision to vote in favour of certifying the election results in Congress as a reason she could pick up the votes.

But Mr Bannon was not always so positive about Ivanka Trump.

Before earning a pardon from President Trump in his final hours in office, the pair had been estranged since Mr Bannon’s dismissal from the White House in August 2017 over his being quoted in Michael Wolff’s book Fire and Fury calling Ivanka “dumb as a brick”.

0 0 0 0
Previous : Boohoo buys Debenhams for £55m and to relaunch as online-only business
Next : Supreme Court tosses out cases accusing Trump of profiting from presidency