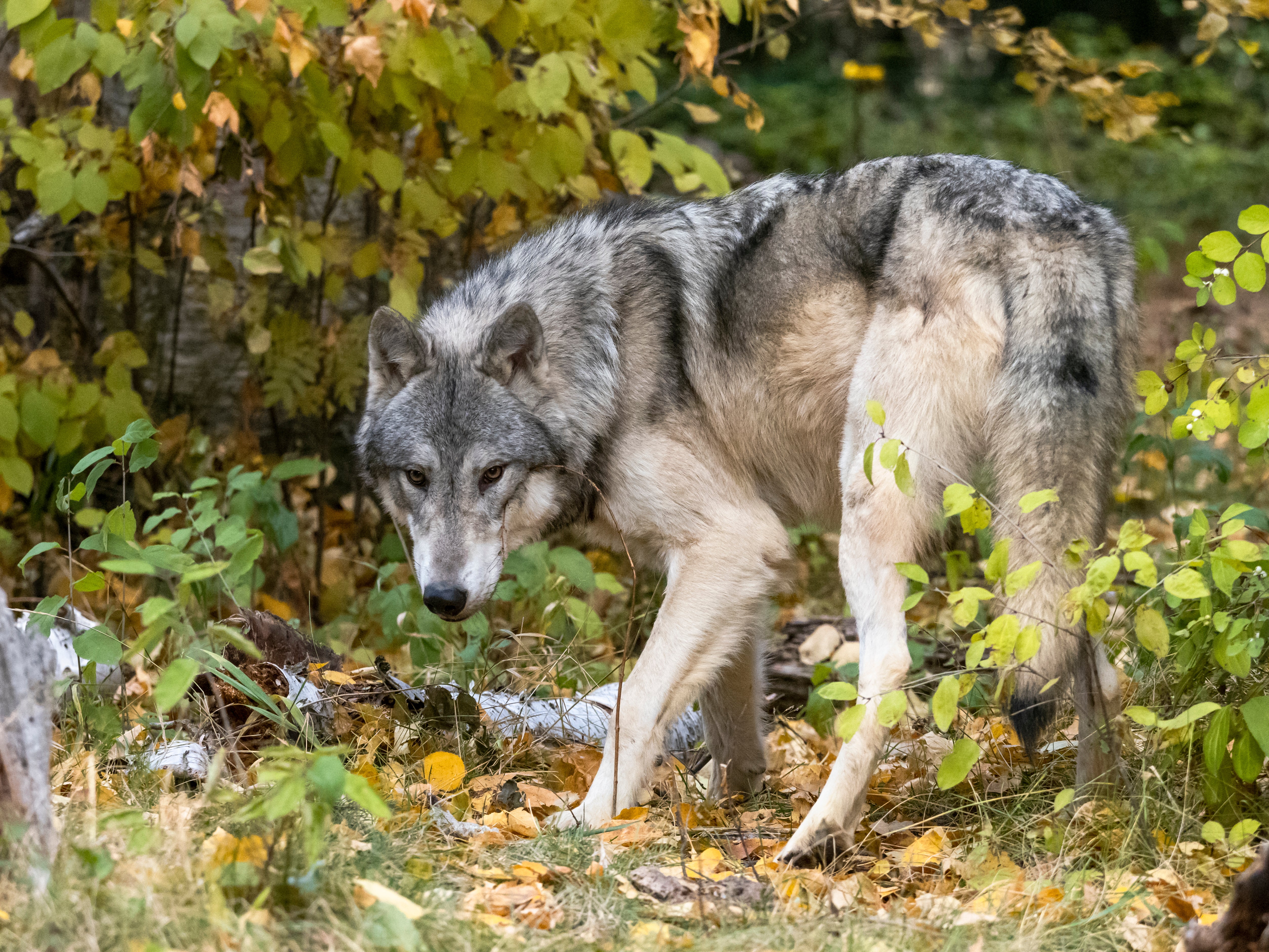 Until now, scientists only knew that dogs had evolved out of a wolf population somewhere in Asia or Europe – but the new research has now pinpointed the specific region where that occurred and the approximate date that the transformation took place.

A combination of DNA and archaeological evidence has revealed that every poodle, dachshund, chihuahua, alsatian and every other type of dog in the world originated as grey wolves in eastern Siberia in around 21,000BC.

What’s more, it’s likely that their initial domestication took place entirely naturally – and was not deliberately engineered by humans.

The archaeological and DNA research has just been published in the US Proceedings of the National Academy of Sciences (PNAS).

The new investigation, carried out by British, American and French scientists, suggests that the close relationship between dogs and humans was initially triggered by climatic challenges.

At the height of the last Ice Age (around 21,000 to 17,000 BC), temperatures dropped and precipitation declined to such an extent in Siberia that many of the wolf’s normal prey (animals like reindeer, musk oxen, wild horses, bison and others) became locally extinct or at least much less numerous. This appears to have forced some desperate yet enterprising wolves to start scavenging around human encampments – looking for bones and gristle, which the humans had discarded.

Wolves have an ability to rapidly learn new skills and then develop new economic and cultural specialisms which can then be passed down through succeeding wolf generations. Wolves born into such economically specialist lineages tend only to mate with others from the same skill-set background.

Genetic evidence shows that, as a result, after dozens of generations, their DNA  begins to be group specific (ie different from other groups of wolves with other different skill-set economies and cultures).

This is precisely what seems to have occurred to those Siberian grey wolves whose descendants were destined to gradually evolve into the first dogs.

“Dog domestication, occurring in Siberia, answers many of the questions we’ve always had about the origins of the human-dog relationship,” said Durham University archaeologist Dr Angela Perri who led the international team of researchers which produced the ground-breaking PNAS paper.

As the process progressed through the centuries, the wolves appear to have gradually lost some of their hunting skills. Occurring over hundreds of generations, natural selection no longer maintained their physical and technical ability to kill prey.

As a consequence, they seem to have become increasingly dependent on humans for their food. Indeed, Russian archaeologists, excavating Stone Age encampments in Siberia, have found potential wolf gnaw marks on discarded human food debris.

Scientists now believe that when wolves were beginning to scavenge human rubbish (much like urban foxes do today), the humans would have no doubt regarded them as a nuisance – and a potential threat.

But, as the wolves established their presence, they would have instinctively begun keeping other wolves and predators away from their human food providers – fundamentally to protect and preserve their new food source. Without any human guidance, they would almost certainly have automatically become the encampment’s unofficial guards. At the very least, they would have made a lot of noise (so-called “wolf coughing”) if any potential aggressor (human or animal) approached the camp – normally long before humans (with their much poorer hearing and sense of smell) would have noticed.

As a result, a mutually beneficial relationship seems to have developed between the scavenging-adapted wolves and humans.

The researchers point out that this symbiotic relationship (guarding in return for food) exists elsewhere in the animal world. Indeed, even today, special caribou-hunting wolves accompany caribou (reindeer) herds in Canada to prevent other wolves predating on them.

Only after a mutually beneficial wolf/human relationship had become firmly established (and after dependence on humans had led to profound genetically-triggered behavioural changes) were prehistoric people able to start deliberately selecting and breeding early dogs for other roles – like helping humans to hunt and pulling sleds across frozen landscapes. Like their wolf ancestors, it was these early dogs’ abilities to learn new skills and teach them to succeeding generations that made them ideal candidates for specialist economic roles, this time deliberately allocated to them by their human masters.

The scientific investigation – led by scientists from the universities of Durham, Oxford, Munich, Copenhagen, Illinois and the Southern Methodist University in Texas – suggests that these early dogs’ subsequent roles had probably begun before the 13th millennium BC.

Certainly humans were, by that time, taking their dogs with them wherever they migrated.

Archaeologically and genetically, the first probable evidence of dogs in both Europe and North America dates from around 13,000BC.

Indeed it is conceivable that humanity’s extremely rapid expansion in North America at around that time might have occurred, at least in terms of speed, courtesy of dog domestication – and the rapid dog sled transport it had eventually facilitated. Russian archaeologists have recently discovered the remains of Stone Age dog sleds in Siberia.

“Dog and human histories are completely intertwined. Dog evolution developed in parallel with our human story and that is clearly demonstrated around the world,” said one of the paper’s co-authors, Oxford University’s Professor Greger Larson.

So close had the dog/human bond become that by 13,000BC, humans began to give dogs similar funerary treatment to humans. The earliest known dog graves, dating back to that era, have been found in Germany – and, by 6000BC, dogs in Scandinavia, the southeast USA and northern Japan were being buried with their own grave goods for use in their doggy afterlives.

“They were valuable members of society – and seem to have been regarded as almost human. Indeed the archaeological evidence shows that their owners often treated them as if they were human,” said  Durham University archaeologist Dr Perri.

But how, thousands of years earlier, did the world’s first “dog owners” – the Stone Age Siberians – refer to their newly found four-legged friends?

Today, every language on earth has its own word for dog – but extraordinarily, it is that huge variety of words that provide clues as to how Stone Age Siberians 15,000 to 20,000 years ago, may have referred to their pooches.

Significantly, in an unusually high number of major modern languages (around 28 per cent of the top 250), the word for dog begins with a “k” (or an equivalent sound). In most cases it is then followed by a vowel (usually a “u” or an “a”) which in turn is followed by a consonant (most commonly, an “r” or an “n”).

That pattern is distributed worldwide from Europe to China and from Arabia to North America. It occurs in large numbers of different language groups – everything from Celtic, Latin, North Indian and Dravidian languages to Finno-Ugric and Turkish and from Semitic to some Austronesian and Polynesian languages and some Chinese dialects – along with many other languages, such as Hausa, Bulgarian, Albanian, Tibetan, Inuit, Tlingit, Tocharian, Ossetian, Nivkh (Outer Manchurian), Lampung (South Sumatran) and many others.

What’s more, sounds like “ch” which “k” often evolves into, feature as initial sounds in many words for “dog” in indigenous languages in South America and elsewhere, where the initial “k” is absent.

With this global “k” or k-related dog word phenomenon, it’s therefore conceivable that the original Siberian Stone Age word for the first pooches may potentially have been something like “kur” or “kura” or “kuru” – remarkably similar to a now seldom used English-language alternative word for dog, beloved of Shakespeare, namely “cur”.

The sounds that dogs make have generated onomatopoeic words in scores of different languages – and it is possible that the original Siberian word for dog (potentially, kur or kura or something similar) may have onomatopoeically reflected the growling sound of our early four-legged friends. Indeed, that Shakespearean “cur” word for a dog of ill repute seems to have been related to and derived from an old Viking word, describing a rumbling or growling sound.

“The frequency of ‘k’ as the initial sound in words for dogs worldwide is very striking,” said historical linguist Dr Philip Shaw, of the University of Leicester.

“It suggests the possibility that the original prehistoric word for dog may have begun with that sound.

“Indeed, it is conceivable that the original word developed as an onomatopoeic rendering of the growl of a dog,” he said.

Physically, the first prehistoric dogs are lost in the mists of prehistory – but, courtesy of linguistic continuity, their original growl is probably, in a sense, still with us today.

0 0 0 0
Previous : ‘It caused me big stress’: U-turn on plans to decriminalise non-payment of TV licence fee ‘will disproportionately hit women’
Next : ‘My sister is pathetic’: Laura Ingraham’s brother slams her criticism of Dr Fauci on Twitter