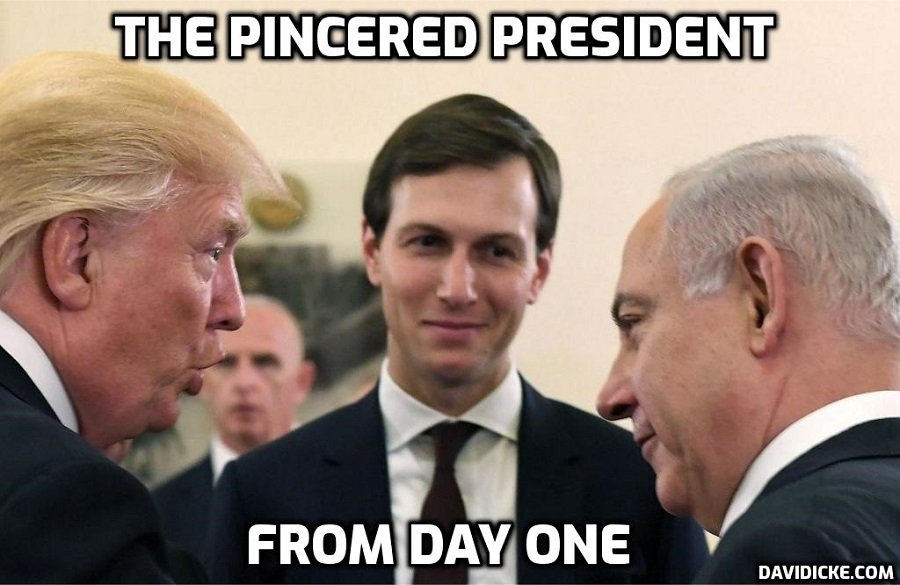 ‘Free-speech’ Trump signed Executive Order to label Palestinian justice BDS boycott-Israel movement as ‘anti-Semitic’ in move orchestrated by son-in-law Jared Kushner, life-long friend of Netanyahu, who also arranged for his crooked father to be pardoned by the ‘maverick’ president owned by the Sabbatian-Frankist Cult just like Biden

U.S. President Donald Trump on Wednesday signed an executive order steeped in controversy that seeks to thwart the Boycott, Divestment and Sanctions (BDS) movement and what he and others say is rampant anti-Semitism on college campuses.

The order will change enforcement of Title VI of the 1964 Civil Rights Act to apply to anti-Semitic discrimination by defining Judaism as a nationality, not a religion. The law currently prohibits “discrimination on the basis of race, color and national origin in programs and activities receiving federal financial assistance.”

It does not explicitly address religion, and Trump said his executive order seeks to allow the federal government to withhold funds to colleges, universities and educational institutions it deems to be hotbeds of anti-Semitism. The full text of Trump’s order was not immediately available, however.

“We have also taken a firm stance against the so-called Divestment and Sanctions Movement, or BDS,” Trump said during a Hanukkah reception at the White House. “If you want to accept the tremendous amount of federal dollars that you get every year, you must reject anti-Semitism. It’s very simple.”

The Palestinian-led BDS movement, formed in 2005, calls for a boycott of Israeli companies involved in the Palestinian occupation or violating Palestinian human rights and for other institutions to divest their interests in those companies.

Opponents of the movement, Trump included, view it as a front for anti-Semitism.

In announcing his order, Trump said he is condemning the “anti-Semitic campaign against the state of Israel and its citizens.”

But critics have called the measure into question, describing it as a thinly-veiled attempt to curb free speech on campuses.

“Kushner is the one tolerating anti-Semitism. He’s a shanda,” the group said on Twitter, referring to the president’s son-in-law, Jared Kushner, who played a leading role in advancing the order. In Yiddish, “shanda” means a disgrace.

J Street, a left-leaning pro-Israel lobbying group, said in a statement that Trump’s order “appears designed less to combat anti-Semitism than to have a chilling effect on free speech and to crack down on campus critics of Israel.”

Read more: ‘Free-speech’ Trump signed Executive Order to label Palestinian justice BDS boycott-Israel movement as ‘anti-Semitic’ in move orchestrated by son-in-law Jared Kushner, life-long friend of Netanyahu, who also arranged for his crooked father to be pardoned by the ‘maverick’ president owned by the Sabbatian-Frankist Cult just like Biden

0 0 0 0
Previous : Fire-and-rehire tactics have become widespread during pandemic
Next : Dog-training for humans – Artificial Intelligence Pedestrian ‘Management’ coming to everywhere soon. Dystopia in your face but it’s to ‘save’ you from ‘Covid’ so how could you possibly complain?