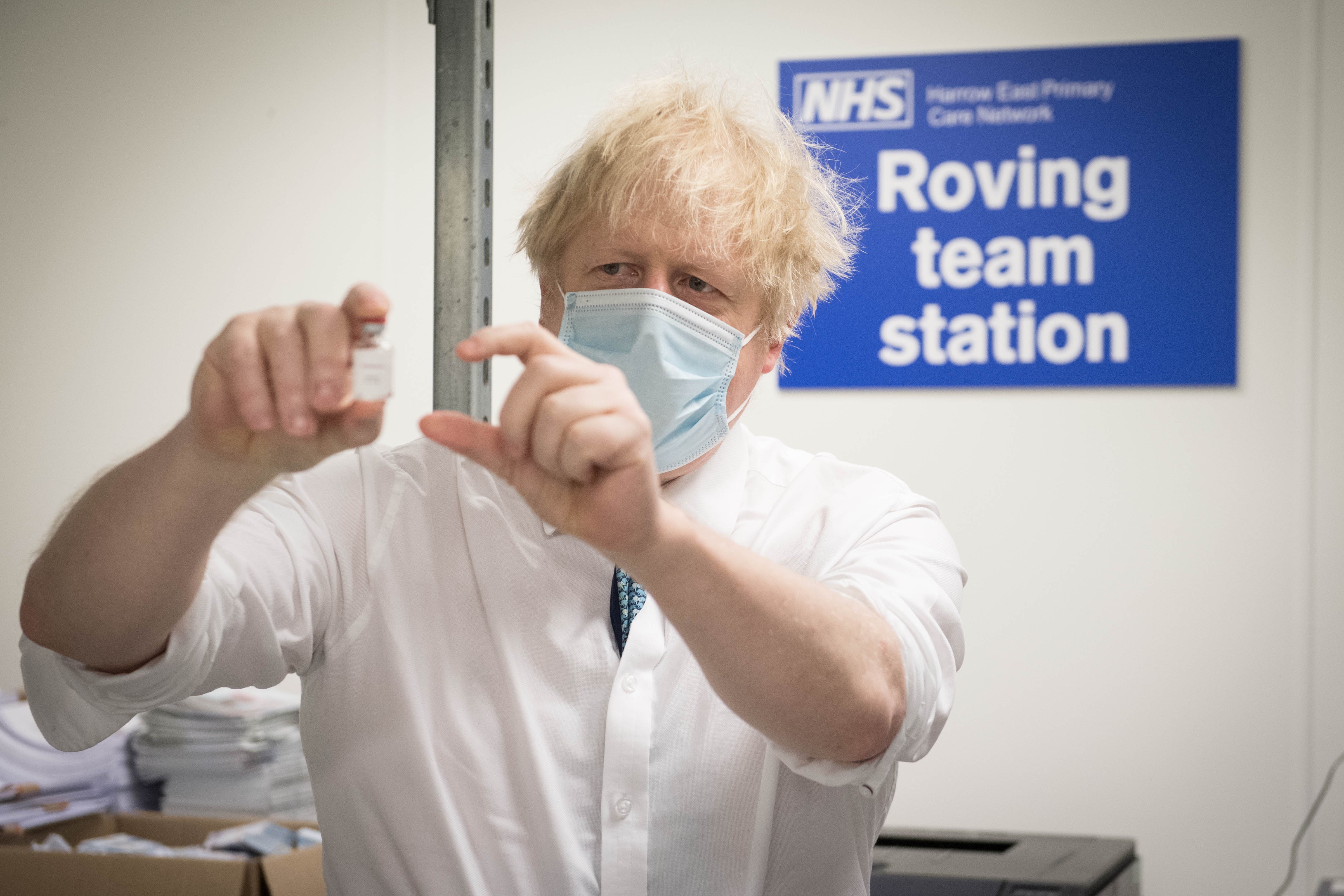 The prime minister is coming under intense pressure to get children back into classrooms after health secretary Matt Hancock failed to rule out the possibility that they will remain closed until the Easter holidays.

Speaking during a visit to a coronavirus vaccination site in north London on Monday, Mr Johnson said that, while he could not provide a date now,  parents and pupils should not assume that this meant they would have to wait until mid-April.

“Schools obviously will be a priority but I don’t think anybody would want to see the restrictions lifted so quickly while the rate of infection is still very high so as to lead to another great spread of infection,” he said.

“I understand why people want to get a timetable from me today, what I can tell you is we’ll tell you, tell parents, tell teachers as much as we can as soon as we can.”

Ministers have promised to give schools two week’s notice of any date for the return of all pupils, meaning that reopening at the end of half-term on 22 February would require an announcement within two weeks.

The prime minister said the government will be “looking at the potential of relaxing some measures” at the review of the England-wide lockdown scheduled for 15 February.

But he added: “I do think now this massive achievement has been made of rolling out this vaccination programme, I think people want to see us making sure we don’t throw that away by having a premature relaxation and then another big surge of infection.

“I totally understand the frustrations of parents, I really thank teachers for what they’re doing, the immense efforts they’re going to to teach kids online, and the Government has provided a lot of laptops… I know that’s no substitute for direct face-to-face learning.

“Believe me there’s nothing I want to do more than reopen schools, I’ve fought to keep schools open for as long as I possibly could.

“We want to see schools back as fast as possible, we want to do that in a way that is consistent with fighting the epidemic and keeping the infection rate down.”

Mr Johnson said that people “mustn’t assume” that schools will now remain closed until Easter, insisting that the government was constantly looking at infection data and wanted to reopen schools as soon as possible.

Education Secretary Gavin Williamson is widely expected to confirm this week that there will be no return to the classroom after the February half-term break as ministers had hoped.

Ministers believe that infection rates and pressure on the NHS need to come down further before the move can be considered, with no guarantee that classes will resume before Easter.

But the chair of the Commons Education Committee today suggested that restrictions on other social and economic activities could be tightened in order to allow schools to reopen safely.

Robert Halfon told the BBC: “It may be that one thing the government should consider is that even if there are tighter restrictions in other parts of our society and economy, you have those restrictions in order to enable the schools to open.

“The Government said that the intention was to open the schools again after the February half-term – over the weekend in the newspapers it was indicated that the schools now won’t open until Easter, so that’s why I’m urging clarity for parents, children, teachers and support staff as to what the Government plans are because there’s enormous uncertainty.”

He told BBC Radio 4’s Today programme that two or three weeks after the four priority groups have been vaccinated – due mid-February – lockdown measures should start being lifted.

“At that point you need to start bringing the economy back to life, and the first thing that needs to be reopened are our schools so our children can get back, mix with their friends, and enable their education and their social development to take place,” Mr Harper said.

“What we are asking for now is the Government to set out that plan and bring some clarity.”

The latest Government figures showed more than 6.3 million people across the UK have received their first dose of the vaccine – with a record-breaking 491,970 being injected in a single day over the weekend.

Based on the latest figures, an average of 393,031 first doses of vaccine would be needed each day in order to meet the Government’s target of vaccinating the top four priority groups – including all over-70s – by mid-February.

The programme, which involves delaying a second dose for 12 weeks rather than three in order to increase the number of people who are given an initial shot, has been criticised by the British Medical Association.

But Professor Adam Finn, a member of the Joint Committee on Vaccination and Immunisation, said he believed protection would continue to increase from the initial first dose throughout the 12-week period.

He told the BBC that people could be “misled” by critics complaining there is a lack of data for the Government’s approach, insisting there is “absolutely rock-solid evidence that if you give a dose of the vaccine to more people you give them protection and save lives”.

Meanwhile, senior ministers are due to meet on Tuesday to discuss a proposal to require travellers arriving in the UK to pay to quarantine at a designated hotel to ensure they are following the rules on self-isolating.

The proposal is said to have the backing of key ministers including Chancellor Rishi Sunak, Home Secretary Priti Patel and Cabinet Office minister Michael Gove, as well as Health Secretary Matt Hancock.

It was prompted by the emergence of new variants of the virus in Brazil and South Africa which scientists fear may be less susceptible to the vaccines that have been developed.