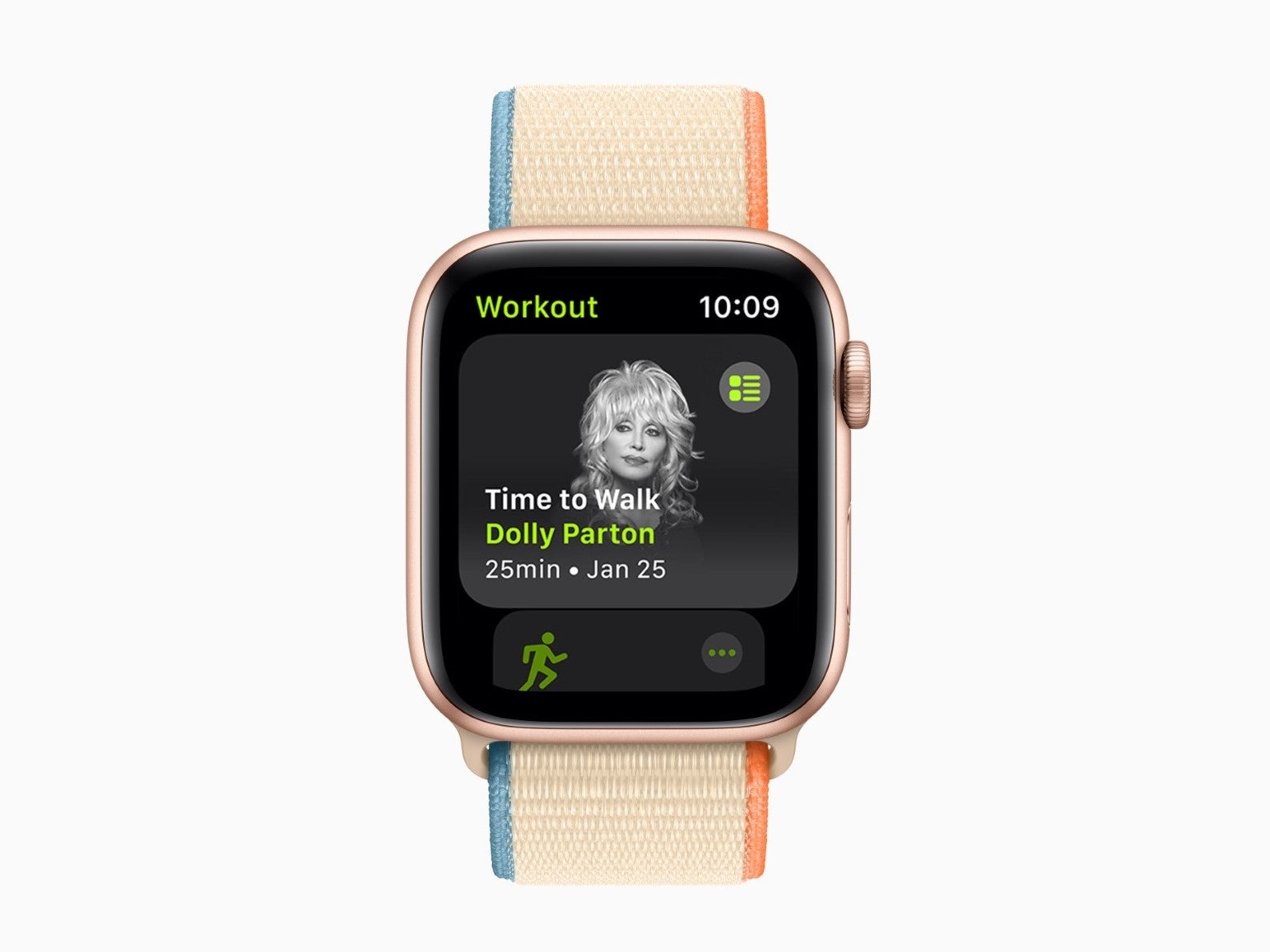 Apple has just unveiled an innovative new feature in Fitness+, its subscription service for Apple Watch users, and it’s focused specifically on walking. But where other workouts are designed to be experienced on an iPhone, iPad or Apple TV, the new addition, called Time to Walk, is meant to be enjoyed just on your wrist.

Jeff Williams, Apple’s Chief Operating Officer and Jay Blahnik, Director of Fitness and Health technologies, spoke exclusively to The Independent about it.

Walking is the most popular form of exercise there is, and the most popular workout for Apple Watch users. Time to Walk is designed as an audio accompaniment to an outdoor walk, and if that sounds so-so, wait until you try it. As you go, you’ll hear the voice of a guest, telling you a little about their lives and choosing three songs which are important to them. There’s an element of Desert Island Discs to it, and it’s just as engaging, touching and surprising as that programme can be.

But it’s also different: the guest is on their own walk, too, and at several carefully chosen moments in their story, a relevant photograph will appear on your Watch. Of course, through the walk you can see your exercise metrics on the Watch as you go. And there’s a one more difference: it’s just you and the guest.

As Jay Blahnik explains, “there were a lot of ways that the creative execution of this could have gone but in the end, having just the guest felt like the right thing. The conversations you would have with another person if you were really walking with them are different to the way an interview might go or a big group conversation can happen.”

Jeff Williams adds, “If you ask somebody to tell you a life story, they will almost always involve challenges and, because we all face those, it’s wonderful to hear about other people’s challenges and how they’ve dealt with them. It’s such a part of the human connection.”

There are four episodes right now, with another arriving every Monday between now and April. The openers are singer Shawn Mendes, NBA player Draymond Green, actress Uza Aduba from Orange is the New Black, and Dolly Parton. Each lasts between 25 and 40 minutes, so a good walk, and perfect for a time of lockdown.

Williams says, “I think this is useful anytime, but one of the things with shelter-in-place is it can drive isolation. I think people yearn for social connection and Time to Walk encourages people to get out and walk and offers this sense of connection to interesting people. I’ve found that within a couple of minutes of an episode, I feel like I’m out walking with someone.”

Dolly Parton was the first guest I walked with, and it was highly enjoyable, thanks to Ms Parton’s disarming candour and down-to-earth modesty. When she’s telling a story about a statue put up in her honour at the local courthouse, a photograph of the statue pings on to the Apple Watch screen for a few seconds (a tap vibration on the wrist tells you it’s there). The audio starts gently as Dolly Parton introduces herself and talks about her family and her childhood with an enthusiasm that’s infectiously entertaining.

But as well as reminiscing, she talks about right now, and how getting out, “with Covid and all” isn’t as easy as it used to be. And as she cues up the song 9 to 5 she reveals that the noise that she says “sounds like a typewriter” in the song is her acrylic fingernails tapping: “Of course you have to have acrylic nails, your own nails won’t do that, you have to have falsies,” she explains.

Her favourite song, she says, is Coat of Many Colors and her description of that is similarly charming.

“I think we forget how easy mindfulness is,” is how Shawn Mendes begins his Time to Walk, explaining how mindfulness has led to breakthroughs for him and how a “panic-attack meltdown” almost took him over. He eloquently talks about how opening up to vulnerability let him have more ideas. “It’s not only about nailing it, it’s about doing it… You need to be able to fall on your face in front of yourself.” His footsteps gently reverberating in Griffith Park, or a couple of people laughing as they pass by just add to the atmosphere.

You don’t need your iPhone with you to enjoy the Time to Walk sessions, only the Apple Watch and paired headphones like AirPods. If you’re a wheelchair user, the feature is retitled Time to Push.

Because it’s just you and the guest, and you’re both doing the same thing, you’re out on a walk together, it feels different, perhaps because it’s on the Watch, which Apple sometimes refers to as its most personal product. As Williams says, “There’s something just really intimate about the whole experience you have with Apple Watch, as there is with taking a nice walk. So, there was a lot of thought put into how this could be the most intimate experience for the individual.”

Time to Walk is part of the Apple Fitness+ subscription service which launched in December. Apple Watch users have access to a huge and growing range of exercise sessions. You can choose from yoga, high-impact interval training, core, dance and more. It costs £9.99 a month, though the first month is free to current Watch owners, or the first three months are free when you buy an Apple Watch. The workouts are magnificently realised, with a huge team of trainers and different-length sessions designed to appeal to all abilities. The videos play on your iPhone, iPad or Apple TV, with metrics such as your current heart rate, gleaned from the Watch, shown onscreen. It’s a service created to be accessible to all.

As Blahnik explains: “We designed the service to be welcoming to everybody, whether it was an add-on to a really hardcore fitness programme or the on-ramp to the first time you’ve done fitness.” He also revealed how it’s going. “The early feedback we’ve received from our users suggests that’s exactly what we’re seeing. There’s a lot of people saying they’re really motivated to do a whole bunch of things on their own, but they just need someone to lead them through a 10-minute yoga session. And then there are other people saying, ‘I’ve never done anything and this is my first step and I’m doing the 10-minute yoga because I’m brand new’. I think we’ll see that with Time to Walk: there’ll be people who usually do something much more hardcore for their workout, but they really enjoy walking their dog and this makes it more entertaining. They go out a little longer and both their dog and they get a little more exercise than they normally would have. Then I think for a lot of people this may be the best on-ramp. They start walking and then they graduate to other things in Fitness+.”

That accessibility seems a popular approach. “We’re already getting emails from customers saying it’s a game-changer for them. That they were intimidated to work out in the gym and this has really changed things. People have found that they can stick with it and have especially enjoyed the short episodes which are both inviting and manageable in their life,” Blahnik says.

The first-generation Apple Watch in 2015 had a heart rate sensor when most smart watches did not, so that it could more accurately record the user’s steps. Now, the latest Watch monitors cardio fitness, lets you take an ECG reading or check your blood oxygen levels. It has a mindfulness app called Breathe, it can track your sleep and, of course, it counts your steps.

Williams has long evangelised the health and fitness properties of the Watch and sees this new element as part of that whole. “From the very beginning of Apple Watch our goal was to help people live a better day and be more active. If doctors could write one prescription, it would be to move more. If we can get the whole world out walking, listening and sharing a diverse set of people’s experiences, the world’s going to be a better place and so it absolutely is the latest step in our journey.”