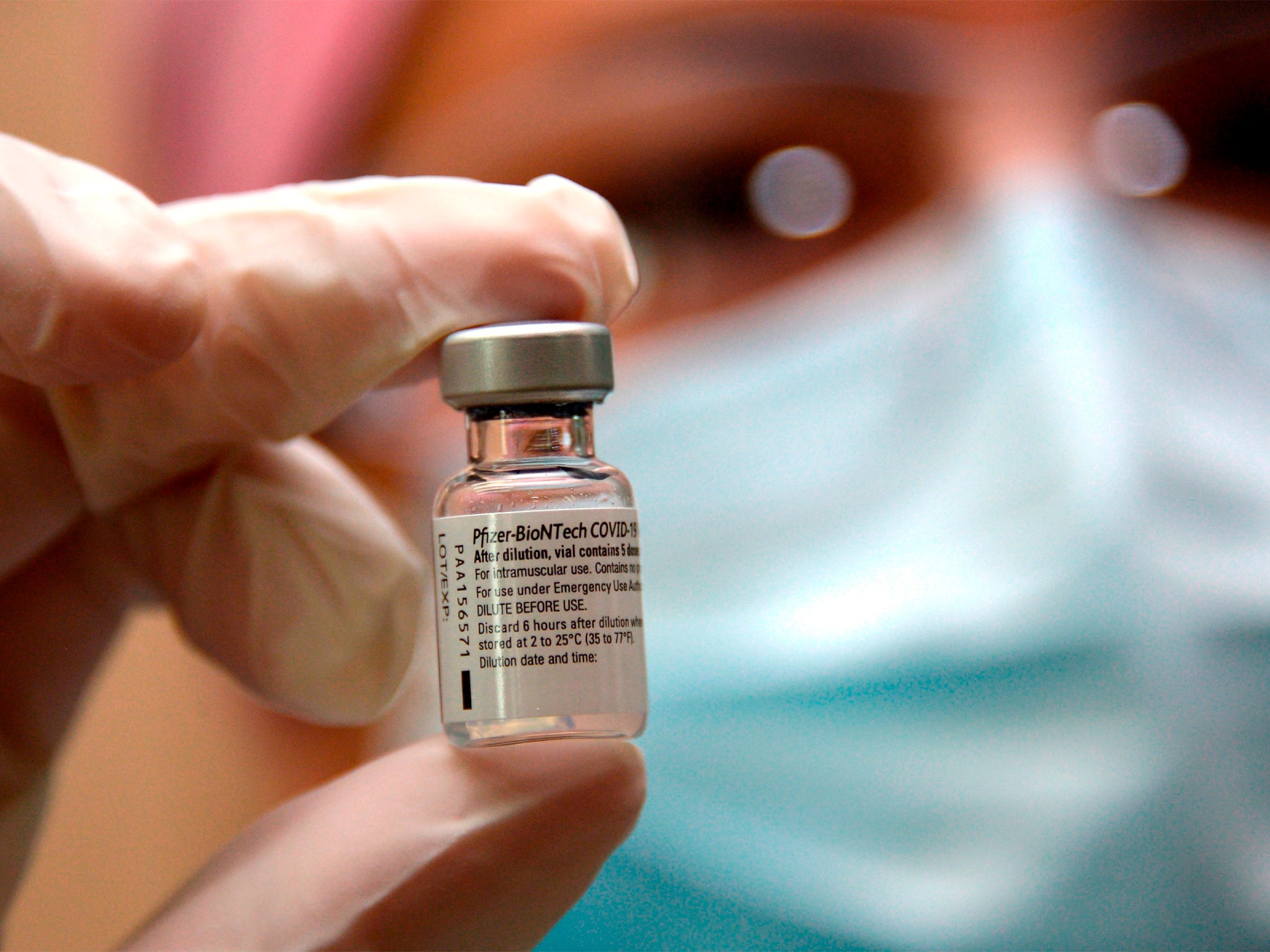 Soon after the government authorised the Pfizer–BioNTech coronavirus vaccine in December, pharmacists discovered that a small amount of extra vaccine in every five-dose vial shipped by Pfizer amounted to a full additional dose.

For a nation desperate to get back to normal, the development was seemingly good news: here was a path to expedite additional shots. On 6 January, Pfizer won an amendment to its Food and Drug Administration authorisation reflecting that each vial in its shipments contained six shots – an instant 20-per-cent increase.

But as with many aspects of the vaccine rollout, complications arose, dampening enthusiasm.

Squeezing all six doses out of the Pfizer vials requires the use of special syringes that are in short supply. As a result, the sixth dose is often discarded, trapped in the small dead space in regular syringes, where the syringe’s stopper cannot reach it to plunge into a human arm.

Joe Biden highlighted the urgent need to produce more of the specialty syringes – called low-dead-space syringes, because they are more efficient – in his pandemic response plan unveiled this week. His administration said it plans to use the Defence Production Act to procure more of them.

The Biden administration and Pfizer finalised a deal Friday that will allow the government to track which shipments are accompanied by low-dead-space syringes and which are not, according to an individual close to the negotiations who spoke on the condition of anonymity to discuss the details.

The arrangement will allow Pfizer to avoid a controversy in the United States that flared in Europe last week, when press reports said Pfizer would be paid for six vaccine doses per vial even though medical providers lacked the equipment required to use all six.

But the agreement permits Pfizer to accelerate fulfilment of its US contract.

“For Pfizer, the FDA approval of the overfill dose means it can fulfill its contract, which calls for doses, and receive full payment from the US with almost seven million fewer vials. But many of those sixth doses might ultimately be discarded because distribution centres lack the proper tools,” said Sam Buffone a partner with the whistleblower law firm Black & Buffone and former senior trial counsel in the civil frauds division of the Justice Department.

The Department of Health and Human Services (HHS) said in response to questions from The Washington Post that it advised the FDA that the move authorising six doses of the Pfizer vaccine per vial posed hurdles.

“The FDA’s decisions on vaccine authorisations and approvals are made independently to preserve the integrity of their process,” HHS said. “HHS did, however, notify the FDA of potential long-term shortages” of low dead space syringes.

FDA said in a statement that it did take into consideration the availability of appropriate injectors, citing what it called their “ready availability”.

But BD, the largest manufacturer of syringes in the world, said the low dead space syringes are not as plentiful as regular syringes and predicted a considerable ramp-up to produce more.

“Low-dead-space syringes are niche products, and there has been minimal market demand based on health-care provider needs,” BD spokesperson Troy Kirkpatrick said.

BD has been working for months to refit a manufacturing facility in Nebraska that will be churning out regular syringes. It has contracts to provide 286 million needles and syringes to the US government by March and said it has already delivered 150 million of those. Of the 286 million, 40 million will be low dead space syringes, the company said.

Those were provided because they were what BD had available, not because it was anticipated that overfill in vials would need to be maximised for additional doses.

“It wasn’t planned that low dead space syringes were going to be needed for the vaccination efforts,” Kirkpatrick said. “When you have to plan months and months in advance, and without sacrificing routine care, it’s hard to sort of stop on a dime and just say, ‘Here’s 100 million of these things.'”

Drug companies typically add a small amount of drug or vaccines in vials of injectable pharmaceuticals to ensure that medical staff will have enough for the full dose. Doses may bubble up when they are shaken, and small amounts are typically trapped in needles and syringes.

Jessica Daley, a pharmacist and vice president of strategic supplier engagement at Premier, a health-care company that brings together 4,100 hospitals and health systems for group purchasing and health-care improvement, said members have reported difficulty in procuring needles and syringes to take advantage of the extra sixth dose in the Pfizer vials.

Operation Warp Speed provides ancillary vaccine supplies, including syringes and needles, in kits shipped by McKesson. But Daley said those kits only have enough for the original number of doses.

“We found early in the process there is Pfizer vaccine overfill in the vial, so we can get more doses out of those vials,” Daley said. “But to do that, you need more needles and syringes than are included in the Operation Warp Speed ancillary kit. We’ve heard from our members they struggle to secure those additional needles and syringes to use the full number available.”

Lindsey Amerine, director of pharmacy at UNC Health, a system of 12 hospitals affiliated with the University of North Carolina Medical Center, said she was working at a vaccine clinic last week and was able to draw six doses from the Pfizer vaccine vials using low dead space syringes. But other staff members at the same clinic were using regular syringes.

“They were not able to get the full six doses out,” she said. “It just depends on what syringes you are using.”