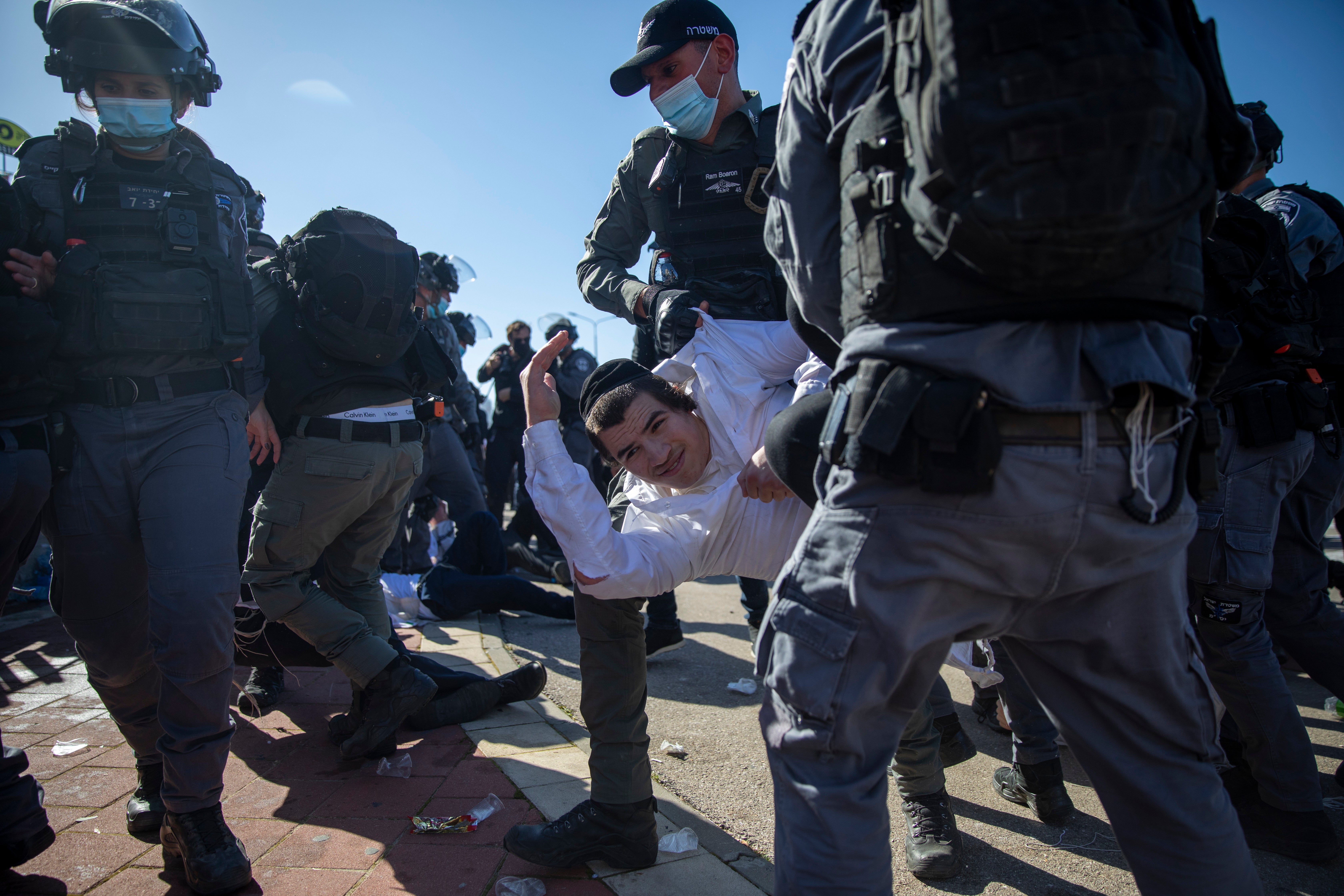 BIDEN-INAUGURATION-TWO-WORLDS — Natalie Abbas and Jim Carpenter are local ambassadors for a program to bridge the nation’s political divide. The gulf between them is wide. Carpenter cheers President Joe Biden as the rightful winner. Abbas is convinced that the election was stolen. Together, they ponder the greatest challenge facing American society: how can they find common ground if they no longer exist in the same reality? By Claire Galofaro and Juliet Linderman. SENT: 2,230 words photos.

VIRUS OUTBREAK — Straining to handle record numbers of COVID-19 patients, hundreds of the nation’s intensive care units are running out of space and supplies and competing to hire temporary traveling nurses at soaring rates. Many of the facilities are clustered in the South and West. An Associated Press analysis of federal hospital data shows that since November, the share of U.S. hospitals nearing the breaking point has doubled. More than 40% of Americans now live in areas running out of ICU space, with only 15% of beds still available. By Carla K. Johnson and Nicky Forster. SENT: 1,140 words, photos. With VIRUS OUTBREAK-THE LATEST (sent)

VIRUS OUTBREAK-CHINA-LEFT-BEHIND — One year after lockdown, Wuhan has long since sprung back to life — but Zhu Tao remains bunkered in his 14th-floor apartment, spending his days doomscrolling through news, playing virtual soccer on his PlayStation and feeling China is teetering on the brink of collapse. His early fears of the virus were vindicated when the outbreak spun out of control. But now that the situation is back to something close to normal in Wuhan, Zhu finds himself at odds with his neighbors and the government. By Dake Kang. SENT: 1,380 words, photos.

TRUMP-IMPEACHMENT — A growing number of Senate Republicans say they oppose holding an impeachment trial, a sign of the dimming chances that President Donald Trump will be convicted on the charge that he incited a siege of the U.S. Capitol. By Mary Clare Jalonick. UPCOMING: 800 words, photos by 3 p.m.

CAPITOL BREACH-POLICE DISCIPLINE — Police departments across the country are reviewing the behavior of dozens of officers who were in Washington on the day of the deadly riot at the U.S. Capitol. An Associated Press review finds at least 31 officers are being scrutinized or face criminal charges tied to the Jan. 6 events in the nation’s capital. By Martha Bellisle and Jake Bleiberg. SENT: 1,120 words, photos. This is the Monday Spotlight.

BIDEN-IMMIGRATION-DEMOCRATS — As one of his first acts, President Joe Biden offered a sweeping immigration overhaul that’s the type of proposal that many Latino activists have longed for. In the best of circumstances, enacting immigration legislation would be difficult. But in a narrowly divided Congress, it could be impossible. And that has some Latinos worried Biden could cut deals that weaken the finished product too much — or fail to pass anything at all. By Will Weissert. SENT: 990 words, photos.

EGYPT-ARAB-SPRING-EXILES — Ten years after protests rocked Egypt, many of the participants live in exile. They have fled to Europe and beyond out of fear for their personal safety under President Abdel Fattah el-Sissi, who continues a crackdown on the political opposition. The Jan. 25, 2011, uprising in Tahrir Square led to the quick ouster of autocratic President Hosni Mubarak. But events did not turn out the way the protesters had envisioned, leading to an even harsher successor in el-Sissi, who has jailed journalists, human rights activists and others. By Sylvia Hui. SENT: 1,280 words, photos..

YELLOWSTONE-OLD GRIZZLY — Wildlife biologists say a 34-year-old grizzly bear captured in southwestern Wyoming has been confirmed as the oldest on record in the Yellowstone region. SENT: 370 words, photo.

VIRUS-OUTBREAK-SPAIN-MENTAL-HEALTH — The unrelenting increase in COVID-19 infections in Spain following the holiday season is again straining hospitals, threatening the mental health of doctors and nurses who have been at the forefront of the pandemic for nearly a year. SENT: 1,000 words, photos, video.

VIRUS-OUTBREAK-CHICAGO SCHOOLS — The Chicago Teachers Union says its members have voted to defy an order to return to the classroom before they are vaccinated against the coronavirus, setting up a showdown with district officials who have said such a move would amount to an illegal strike. SENT: 600 words, photo.

VIRUS-OUTBREAK-BRITAIN — Britain is expanding a coronavirus vaccination program that has seen more than 6 million people get the first of two doses — even as the country’s death toll in the pandemic approaches 100,000. Health Secretary Matt Hancock says three-quarters of the U.K.’s over-80s have received a vaccine shot. SENT: 620 words, photos.

VIRUS-OUTBREAK-NETHERLANDS — Rioters set fires in the center of the southern Dutch city of Eindhoven and pelted police with rocks at a banned demonstration against coronavirus lockdown measures, while officers responded with tear gas and water cannons, arresting at least 30 people. SENT: 430 words, photos.

VIRUS OUTBREAK-ZIMBABWE — Four Zimbabwean Cabinet ministers have died of COVID-19, three within the past two weeks, highlighting a resurgence of the disease that is sweeping through this southern African country. SENT: 530 words, photos.

VIRUS OUTBREAK-BRAZIL PROTESTS — Thousands of Brazilians took the streets for a second day to call for the impeachment of President Jair Bolsonaro, who is under fire for his government’s response to rampant cases of COVID-19, which has claimed more than 216,000 lives in the country. SENT: 460 words, photos.

VIRUS-OUTBREAK-EGYPT — Egypt has launched a vaccination campaign against the coronavirus, with the first shots of Chinese state-owned pharmaceutical giant Sinopharm’s vaccine given to health care workers in the Suez Canal city of Ismailia. SENT: 260 words.

VIRUS OUTBREAK-TURKEY — Turkey has passed 25,000 COVID-19-related deaths since the start of the outbreak in March, the health ministry said. SENT: 260 words, photos.

VIRUS-OUTBREAK-COLLEGE-SPORTS — The entire University of Michigan athletic department is pausing after several positive tests for the new COVID-19 variant that transmits at a higher rate. SENT: 270 words, photos.

VIRUS OUTBREAK-ASIA — New Zealand has reported its first coronavirus case outside of a quarantine facility in more than two months, although there was no immediate evidence the virus was spreading in the community. SENT: 360 words, photos.

SENATE-GEORGIA-JOHN-LEWIS — Six months after his death, the late civil rights leader and longtime Georgia congressman John Lewis will retain a palpable influence in Congress. The state’s two new Democratic U.S. senators are both personal friends and admirers of Lewis. And both have promised to carry on his legacy. SENT: 840 words, photos.

BIDEN — President Joe Biden attended Mass for the first time since taking office, worshipping at the church he frequented when he was vice president. SENT: 570 words, photos.

CHINA-MINE-EXPLOSION — Eleven workers trapped for two weeks inside a Chinese gold mine were brought safely to the surface on Sunday, a landmark achievement for an industry long-blighted by disasters and high death tolls. State broadcaster CCTV showed workers being hauled up one-by-one in baskets, their eyes shielded to protect them after so many days in darkness. SENT: 310 words, photos.

ARGENTINA-ABORTION — Argentina’s groundbreaking abortion law went into force under the watchful eyes of women’s groups and government officials, who hope to ensure its full implementation despite opposition from some conservative and church groups. SENT: 700 words, photos.

RUSSIA-NAVALNY-PROTESTS — The spokesman for Russian President Vladimir Putin says the U.S. Embassy’s statements about the nationwide protests, in which more than 3,500 people reportedly were arrested, interfere in the country’s domestic affairs and encourage Russians to break the law. SENT: 300 words, photos.

BRITAIN-SCOTTISH INDEPENDENCE — Scotland’s leader says that she intends to hold a “legal referendum” on independence from the U.K. if she wins Scottish elections scheduled for May. Such a move would put First Minister Nicola Sturgeon on a constitutional collision course with Prime Minister Boris Johnson, who opposes another secession vote. SENT: 320 words, photo.

ESTONIA-POLITICS — Estonia’s two biggest political parties clinched a deal on Sunday to form a new government to be led by a female prime minister for the first time in the Baltic country’s history, replacing the previous Cabinet that collapsed into a corruption scandal earlier this month. SENT: 640 words, photos.

CHINA-US-TAIWAN — The U.S. has reaffirmed its support for Taiwan following China’s dispatch of warplanes near the island in an apparent attempt to intimidate its democratic government and test the resolve of the new American presidential administration. SENT: 570 words, photo.

SYRIA-CURRENCY — A new, 5,000 Syrian lira bank note has gone into circulation, the largest denomination in the country reeling from a decade of conflict and a crippling economic crisis. SENT: 240 words, photos.

MEXICO-VIOLENCE — Mexican authorities say they have found 19 shot and burned bodies near a town across the Rio Grande from Texas in an area that has seen violent territorial disputes between organized crime groups in recent years. SENT: 210 words.

INDONESIA-IRAN-VESSELS-SEIZED — Indonesian authorities said that they seized an Iranian tanker and Panamanian tanker suspected of carrying out the illegal transfer of oil in their country’s waters. SENT: 250 words, photos.

TURKEY PIRATE-ATTACK — Armed pirates attacked a Turkish cargo ship off the West African coast, kidnapping 15 sailors and killing one of them, officials said as Turkey sought to recover the captured crew.. SENT: 400 words.

REL-SOUTHERN-BAPTISTS-RACE — Several Black pastors have recently exited the Southern Baptist Convention in dismay over what they see as racial insensitivity from some of its predominantly leaders. SENT: 1,040 words, photos.

CONCEALED CARRY-BILLS — Republican lawmakers in several more states want to loosen gun restrictions by allowing people to carry concealed firearms without having to get a permit, continuing a trend that gun control advocates call dangerous. Fifteen states already allow concealed carry without a permit, and lawmakers in nine others have proposed allowing or expanding the practice. SENT: 680 words, photos.

FBN-NFC CHAMPIONSHIP — The top-seeded Green Bay Packers seek their first Super Bowl berth in a decade when they host the Tampa Bay Buccaneers in the NFC championship game. The Bucs, who beat the Packers 38-10 on Oct. 18, are attempting to become the first team to play a Super Bowl on their home field. UPCOMING: 800 words, photos. Game starts 3:05 p.m.

FBN-AFC CHAMPIONSHIP — The Bills will be making their first AFC championship game appearance since a 30-13 home win over Kansas City on Jan. 23, 1994. But unlike that game in Buffalo, the Bills will be the visitors for the first time in three postseason games against the Chiefs. Kansas City is only the second team in NFL history to host three consecutive conference title games. UPCOMING: 800 words, photos. Game starts 6:40 p.m.