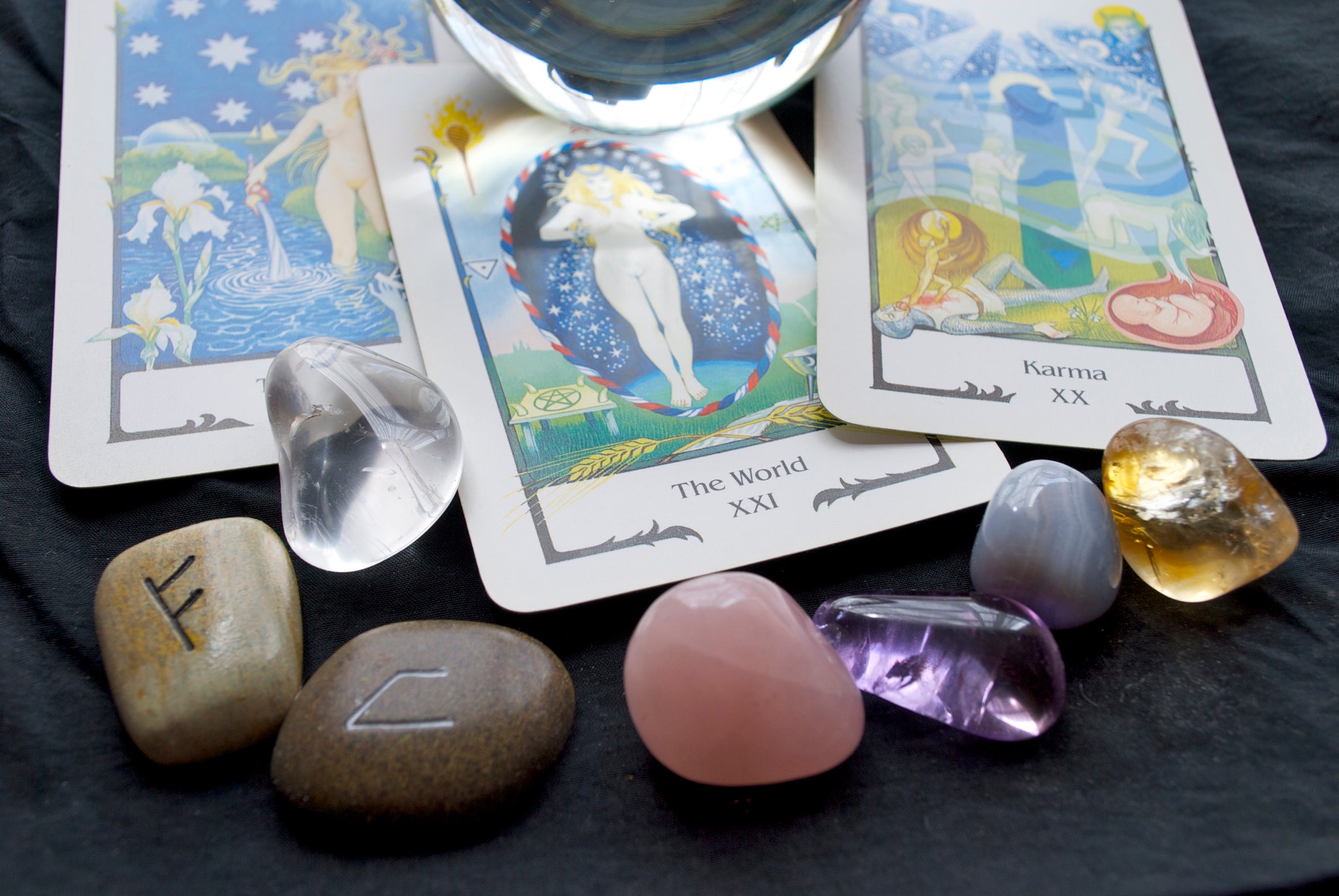 What can these American psychics tell us about the pandemic world?

few weeks before the US presidential election, Zulema Hormaeche, a tarot reader in Los Angeles, chose a card to reflect the state of the nation. It was the one that depicts a tall building struck by lightning, with flames bursting from the top and occupants leaping to their deaths.

Hormaeche has an intimate understanding of the ways this year upended people’s lives and sapped their optimism. She has peered into a huge number of homes during virtual consultations. Her clients tell her they are eating and drinking more, and that they feel desperately lonely. And sometimes they mention even more troubling details. One client, she says, described a dream in which she harmed her children.

“All of us are feeling the fear of everybody,” Hormaeche says, and that fear, coupled with uncertainty about when it might abate, has caused demand for spiritual guidance to soar. According to data from Yelp, interest in businesses in the somewhat niche “Supernatural Readings” category more than doubled in April. Keen, an online marketplace for psychics, has reported a steep rise in customers.

These consultations function almost as armchair counselling sessions: clients can open up and have their thoughts reflected back at them through a nonscientific – even mystical – lens. And while there is good reason to doubt the material of psychic readings (the mystical realm being inherently unknowable, or at least, endlessly interpretable), these consultations provide comfort for some.

James Alcock, a professor of psychology at York University in Canada, who has spent his career looking at belief systems and debunking scientific studies of the paranormal, says he is unsurprised (albeit concerned) by the appeal of such services. “If you look throughout history, whenever there has been some sort of upheaval or some sort of collective anxiety in society, interest in psychics has shot up,” he says.

“The reason is simple,” Alcock continues. “People experience a lack of control and anxiety. We’d all like the pandemic to end.” And without definitive answers from scientists, physicians or elected officials, people are turning to more spurious sources for reassurance.

Online psychic marketplaces have been around for decades, though many of the businesses that host them didn’t begin with overt ties to the occult. Purple Ocean, which opened in 2016, was a spinoff of a site originally intended for nutritionists; Keen opened in 1999 as an online marketplace for live advice. As they grew larger, those sites began to embrace psychic services.

Warren Heffelfinger, who has worked in operations in many industries, joined Ingenio, Keen’s parent company, as CEO seven years ago. The site offers clients more than a glimpse of the future, he says: “They come for prediction, but stay for ongoing counselling and therapy.”

Lynn Bufka, associate executive director for practice research and policy at the American Psychological Association, says that trained therapists were better equipped to talk to clients about mental health. “We have a licence to uphold the health and wellbeing and safety of the individuals that we serve,” she says. “And there’s an accountability.”

But Heffelfinger isn’t concerned; he sees the trend of consulting psychics as part of a broader secular movement. In recent decades, institutional religion has declined; more than a quarter of US adults now say they think of themselves as spiritual but not religious.

And a surprising number of people say they’ve consulted fortunetellers: 1 in 5 Americans, according to a YouGov survey published in 2017. People go to psychics for all kinds of fanciful services, like palm and aura readings, astrological consultations, cartomancy, mediumship and animal communication. In 2019, market research firm IBISWorld reported that those businesses had a combined revenue of $2.2bn.

Even before the pandemic, the business, like so many others, was shifting online. In 2019, consumers spent nearly $40m on the top 10 US psychic and astrology apps, compared to $24m the previous year, according to app research firm Sensor Tower. And demand for services that support emotional wellbeing (such as counselling and wellness apps) has grown over a year of profound loss and collective anxiety.

“All of this opens up a tremendous amount of new business,” Heffelfinger says. Nine of Keen’s 10 highest revenue days during its 20-year history happened during the pandemic.

The upsides of remote readings…

For many, performing readings by phone or computer has been a boon. Nicole Bowman, a psychic in Miami who charges $4.49 a minute on Keen, initially honed her skills in shops and bookstores, but she gets the appeal of anonymous platforms.

She prefers the telephone for technical reasons: “Phone sessions allow me to get into a more meditative state.” It also works better for clients who feel “fidgety” or “nervous” during the session. She says that in her consultations, “the bulk of what I do is empowerment”.

Michael Wamback and Krista Schwimmer, who perform readings in Venice, California, are nearing 60 and take the risks of the coronavirus seriously. “I don’t want to end up dying just to do a reading,” Wamback, 58, says.

These days, they can schedule readings between running errands and looking after their birds: Lily, a crow, and Sister Claire, a dove. (They often swoop across the screen during consultations.) Wamback has enjoyed using virtual tarot decks; physical decks can lose their uniformity over time, and he worries he might subconsciously choose one card over another. (“I think you can cheat,” he says.)

Before the pandemic, the couple had been thinking of going digital. Not only did they want the freedom to travel, but the Mystic Journey Bookstore in Santa Monica, where they had worked for 20 years, was cutting shifts. The bookshop had more than $1m in revenue in 2018, said the shop’s owner, Jeffrey Segal, but the rent was rising, and they needed to downsize.

Covid-19 forced the couple’s hand. “In the long run, it will be very beneficial,” Wamback says. “In the short term, it’s a little chaotic.”

The clients are fewer, but the readings often last longer. “They’re a bit bored and lonely and just want someone to talk to,” he says. Otherwise, their clients don’t follow a type: “Everyone and anyone – the janitor to the CEO, and everyone in between, therapists, strippers.”

Despite the overwhelming number of shared challenges of this year, “the questions really haven’t changed a lot,” Wamback says of those who consult him. Love and relationships dominate, though they’re filtered through the lens of social distancing. Clients have been asking about their jobs, but it doesn’t compare to 2008. “People felt more hopeless during the recession,” Wamback says. “They sort of see the virus as just a short-term complication.”

Thomas Rabeyron, a professor of clinical psychology and psychopathology at the University of Lorraine in France, recently published the results of a study on a group of 60,000 students during lockdown, in which he found marked increases in depression, anxiety and post traumatic symptoms. He compared it to the aftermath of 9/11: the constant warnings of an invisible threat have wreaked havoc on mental health.

Though he is a scientist first, Rabeyron also conducts research on the paranormal. “Psychics are barometers of social anxiety,” he says.

While consultations can feel very therapeutic, he says, these online marketplaces are full of fraudsters, looking to trick vulnerable clients out of their money. “These people are dangerous,” Rabeyron says. “Anyone can be a psychic; it’s expensive; it’s the industrialisation of clairvoyance.” He thinks limits on how much clients can spend should be mandatory on these sites.

Though Heffelfinger, of Keen, insists safety is a priority, he declines to say how exactly the site vets its psychics. “I’d love to share with you,” he says, “but maybe if I did, the bad guys would figure out how to get on our platform.”

Fraud and scams are undoubtedly a danger, particularly now. In September, the AARP’s Helpline reported receiving at least one or two weekly calls from victims of psychic fraudsters compared to one complaint every couple of months in the past.

Even Wamback, who relies on videoconferencing technology to work, is critical of the platforms, which he refers to as “psychic sweatshops”. Bowman, on the other hand, is more skeptical of psychics who haunt the neon signs and small storefronts of New York City. (She’s not the only one; in New York, performing a psychic reading under pretences other than entertainment is a class B misdemeanour, and those convicted of fraud can face multiple years in prison.)

“All you need is a handful of desperate people,” she says.

In recent years technology has opened up new possibilities for counselling, in addition to traditional talk therapy. Apps that feature consultations with professionals and self-guided thought exercises have reached a wider population, and the evolving view that mental health is simply health has reduced some of the stigma around seeking help. The pandemic has only caused demand for such services to rise.

But instead of seeking out mental health professionals, some sufferers have looked to psychics. Alcock, the psychology professor, is worried they are using these sessions to make important life decisions. “People ask specific questions sometimes,” he says. “This gets really serious when people ask for medical advice.”

Indeed, equating therapists and psychics places a global mental health crisis in the hands of people with no training. And while many different kinds of counsellors – religious, spiritual and mystical among them – may be able to help with temporary bouts of anxiety and depression, only health care professionals have the adequate qualifications to treat chronic conditions and more dangerous disorders like schizophrenia.

Bufka emphasises that people experiencing distress should reach out to professionals: “Whether it’s going to be a psychologist or other kind of mental health professional, social worker, counsellor, primary care provider or a psychiatrist – somebody who has training in mental health concerns and understands what those are, and has expertise in how to best treat and address those problems.”

Rabeyron believes there are some benefits to non-psychological consultations, like helping people carry out mourning rites in a new way or simply listening. He says that clients may decide to consult a professional after talking to a reader.

“When it goes well, it can be an entry point into a process of self-examination,” Rabeyron says.

Therapy can appear daunting at the outset. The need for multiple sessions can also be a deterrent, along with the possibility of diagnosis or medicalisation. “Some people are less frightened of psychics than doctors or psychologists,” Rabeyron says.

Still, there’s no match for a trained professional. Hormaeche, who also works as a nurse’s assistant, is used to dealing with vulnerable people, but she is receiving calls that are beyond her expertise. (The uptick could be due to the immense stress of the moment, but there have also been reports of a small number of Covid-19 patients experiencing psychotic symptoms, hearing voices and developing paranoia.)

She mentions a new client who said he was hearing voices that were encouraging violence. She told him only a doctor could help him; she has not heard from the young man since.

“I hope to God he got some help, but that made the hair on my neck go up,” she says.