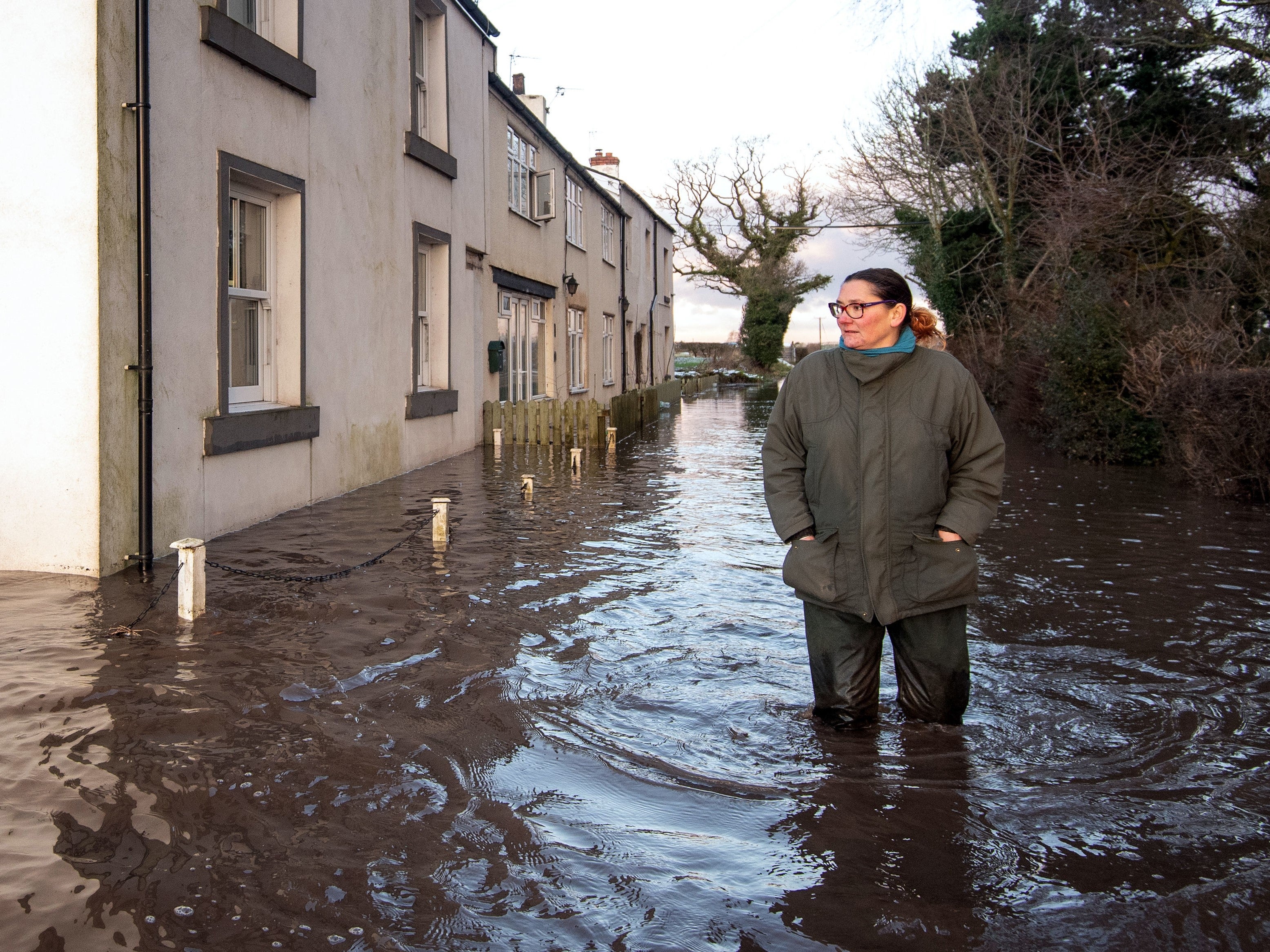 ‘The water was relentless’: How Storm Christoph brought night of trauma to flooded Cheshire village

On Wednesday this week, Helen Douglas finally had new living room blinds fitted almost 18 months after her old ones were ruined when her home in the Cheshire village of Lymm was flooded.

It was one of the final touches to restore her terrace cottage to something approaching normality after what experts suggested was a once-in-a-century deluge in August 2019.

On Thursday, the living room was under water once again.

The property was one of scores across the northwest of England and the north of Wales submerged as rivers burst their banks and drainage systems failed to cope with the torrential downpours brought by Storm Christopher.

Cheshire bore the brunt of much of this. Northwich town centre was submerged, while several people had to rescued by dinghy in Warrington. Residents in at least two care homes had to be moved to hotels.

But it was perhaps Lymm – a village of 12,000 people seven miles from Warrington – that suffered among the worst.

Here, more than 150 residents were told to evacuate following a danger to life warning from the Environment Agency when the nearby River Bollin overtopped. Although fewer than a dozen homes were submerged in the end, for many of those, it was the second such disaster in less than two years after the  2019 floods.

Worse still, perhaps, people here are now already bracing  themselves for worse to come. The Environment Agency has warned more flooding may be on its way next week. Many rivers, including the Bollin, remain at “dangerous levels”, it says.

“It was just traumatic,” Douglas tells The Independent outside her 250-year-old property today. “It’s something happening to your own home that you can’t control. And for this to happen again so soon after last time – you just realise that coping with this is part of your life now. Before 2019, this road hadn’t flooded for decades. Now, it’s just what we have to expect every few years. This is climate change in action.”

She herself was relatively well-prepared this time round, as it happens

So traumatised was she by the last submersions – and so sceptical of the idea it was a freak, one-off event – that she and her four children, aged 21-16, have spent the last 18 months making the place more flood resilient.

Downstairs, she has installed flagstones in place of carpets and wooden floorboards, and rendered the walls instead of plastering them. Her kitchen is now designed in such a way that the oven and utilities are raised up off the floor, while those blinds are wash clean. Outside in the garden are numerous breeze blocks – which can be brought into the house and used to raise furniture off the floor when a flood warning comes.

“So, as you can imagine,” she says today, “that’s what we were busy doing Wednesday night”.

Despite council officials arriving to tell her to evacuate throughout Wednesday, she stayed put until about 2am the following morning. Only then, when a danger to life warning came through, did she finally retreat to a neighbour’s home.

“I wanted to stay as long as possible,” the communications manager says. “Obviously, you can’t do anything once the water comes but it’s hard just to leave something you love. You feel like you’re abandoning it. The whole process – it’s traumatic.”

When the water did come, it reached a couple of inches high – as opposed to about 1 metre in 2019. Because of the changes made to the house in the interim, the family were able to hose down, disinfect, and get back in again by Friday morning.

“Last time we were out for a year, having to live in a rented house,” she says as she glances round at a grand piano still on breeze blocks. “So this is at least better than that.”

A pause. Is it at least gratifying to know the changes they made have now been put to the test and come good?

She thinks. “Not really,” she replies. “I made those changes thinking they might be needed in a few years – not in 18 months. I’d rather it just didn’t flood at all.”

Such a consensus was, it barely needs saying, common across Lymm on Friday morning.

Certainly so in the homes of Gabrielle Burns-Smith and her neighbour Muir Miller in Warrington Lane.

Their properties – 19th century cottages close to the Bridgewater Canal – didn’t flood because of the Bollin bursting its banks. Rather the area’s drains simply were not able to cope with the volume of water that lashed down.

So it was, on Wednesday morning, that Mr Miller and his two adult sons – Hamish, 27, and Ewan, 24, who both live at home – spent several hours trying to clear the street’s drains.

“We got out there when we saw what was happening and really started working the drains,” the 66-year-old said. “Three of us, big lads. But we knew we were fighting a losing battle when the water started coming over the top of our wellies. It was relentless.”

They retreated inside and stuffed curtains and duvets against the door – to no avail. By 4pm, water was seeping into the house. “We’d just decorated too,” says wife Lesley, a glass artist by profession. “So, that wasn’t the best timing.”

When the four of them went to bed that night, the water was still rising. The heating was off, and the stench of sewage infected every room. “It wasn’t the best sleep I’ve ever had,” says Lesley. “We had no idea what we were going to come down to.”

About five inches of water was the answer.

Although it slowly seeped away all day Thursday, it will now take months to get the house back to normal. The carpets are ruined; water marks stain every wall; cracks have appeared in the plaster.

“I would never have imagined it could happen,” says Mr Miller as he gets back to the clean up. “We’ve lived here 17 years and never known anything like it.”

But he himself knows a thing or two about climate change, as it happens: he is the retired managing director of a renewable energy firm.

“You hear of so many people these days saying they’ve been flooded for the first time,” he says. “The weather patterns are changing. Until we address that, this is only going to keep happening.”

0 0 0 0
Previous : Schumer says Trump impeachment trial will start in February
Next : Deborah Birx thought about quitting Trump’s Covid team: ‘Why would you put yourself through that?’