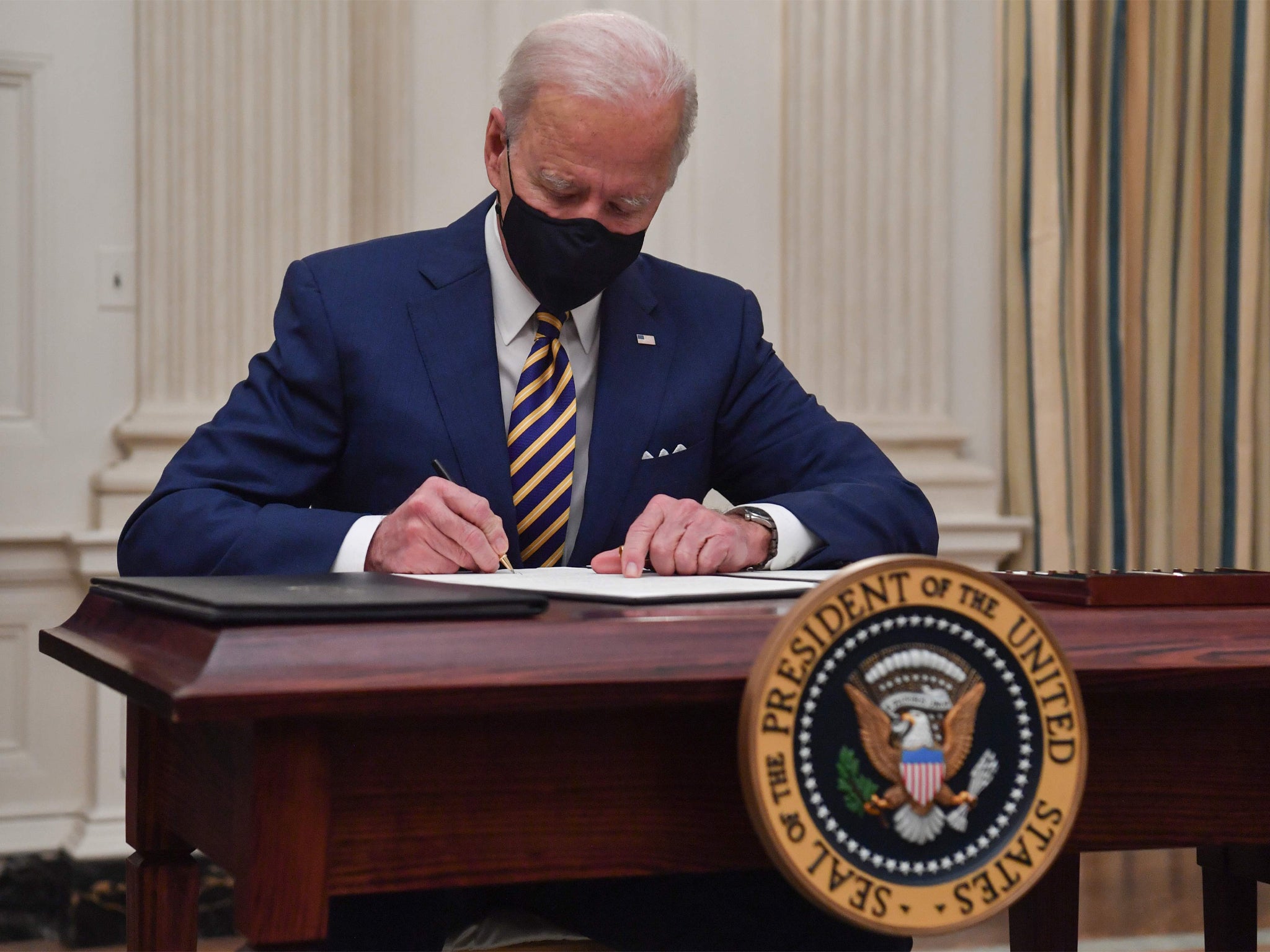 President Joe Biden, vowing to restore environmental protections frayed over the past four years, has ordered the review of more than 100 rules and regulations on air, water, public lands, endangered species and climate change that were weakened or rolled back by his predecessor.

But legal experts warn that it could take two to three years – and in some cases, most of Mr Biden’s term – to put many of the old rules back in place.

“People should temper their expectations about what can be done quickly,” said Kevin Minoli, who served as a lawyer at the Environmental Protection Agency in the Clinton, Bush, Obama and Trump administrations. He added, “It’s very possible, more possible than not, that some of the Trump rules will still be in effect for a couple of years.”

Biden has an array of legal tools to reinstate environmental protections that were dismantled by the Trump administration. Gina McCarthy, his top domestic climate change adviser, headed the EPA in the Obama administration and served as the chief author of some of the nation’s most comprehensive climate change rules. She has now reviewed every possible option to restore those protections, according to a White House official who is familiar with her thinking but was not authorised to speak on the record.

But those tools take time. Experts in environmental law who have spoken with top Biden administration officials said the process of rolling back the Trump-era rollbacks would quite likely fall into a few broad categories. In a limited set of cases, Biden will be able to use his executive authority immediately, for instance to cancel individual fossil fuel infrastructure projects or reinstate federal protections on distinct areas of land and water. He did that on Day One when he rescinded the construction permit for the Keystone XL pipeline, which would have carried oil from Canadian oil sands across the American Midwest.

The White House announced Thursday that any new lease of drilling rights on public lands must have the personal approval of the highest-ranking officials at the Department of Interior – either the secretary or an assistant secretary.

Likewise, Mr Biden is expected in the first months of his term to restore federal protections around at least two national monuments in Utah: Bears Ears and Grand Staircase-Escalante. In 2017, Trump opened nearly two million acres around those monuments to mining, logging and drilling – at the time the largest rollback of federal land protection in the nation’s history.

On Thursday night, the White House released a fact sheet singling out its review of Bears Ears and Grand Staircase, along with one other, Northeast Canyons and Seamounts Marine National Monuments off the New England coast, to “determine whether restoration of the monument boundaries and conditions would be appropriate.”

Patrick Parenteau, a professor of law with the Vermont Law School, said the Biden administration could also act quickly to block Mr Trump’s push to drill in Alaska. In the last days of the Trump administration, the Interior Department auctioned off oil and gas drilling leases in the Arctic National Wildlife Refuge.

“The Biden administration can pretty quickly cancel those leases,” said Mr Parenteau, although he noted that before doing so, the administration would quite likely want to conduct a legal review of whether it would need to compensate the companies that purchased the leases.

Biden’s team has also looked to Congress, where Democrats could potentially use their razor-thin House and Senate majorities to revoke some of the Trump administration’s last-minute regulatory rollbacks. Under the Congressional Review Act, any regulation finalised within 60 legislative days of the end of a presidential term can be overturned with a simple congressional vote.

In the early days of the Trump administration, Republicans used that law to quickly wipe out 16 Obama-era rules.

But legal experts have warned Democrats that using that law to undo environmental policies could backfire: Once Congress has used it to wipe out a regulation, the administration is legally barred from enacting a substantially similar rule. That twist would bar the Biden administration from replacing a weak Trump-era rule with a similar but more stringent one.

Ms Vizcarra cited just one such rollback as a good candidate for rapid reversal under the Congressional Review Act: a January rule that reduced protections for migratory birds by ending penalties for energy and construction companies that harm the birds and their habitats in construction projects and oil spills.

Then there are the longer-term rollbacks. It could take two years or more for the administration to restore Obama-era climate change regulations, rolled back by the Trump administration, that were designed to cut emissions of planet-warming pollution across major sectors of the economy. It could also take that long to restore rules on industrial emissions of toxic pollutants such as mercury, as well as a major rule, Waters of the United States, designed to protect wetlands and waterways.

“When it comes to restoring the vast majority of these Obama environmental policies, the rollbacks were actually done by putting in place new regulations,” Jeffrey Holmstead, a lawyer representing fossil fuel companies who served in the EPA in both Bush administrations. “In some cases that took two to three years. They will have to be replaced with new regulations. There is a legal process that has to be followed.”

The work of reinstating the federal government’s more comprehensive regulations on air, water and climate pollution will take even longer. A key reason, explained legal experts: when the Trump administration rolled back those rules, it almost never eliminated them entirely. Rather, it replaced strict federal pollution regulations with new, weaker pollution regulations.

The Biden administration, in turn, will seek to legally undo those weak regulations and replace them with pollution controls even tougher than those implemented by the Obama administration.

All of that would require aggressive domestic climate policies, but just undoing the Trump policies would typically take two years or more. For example, the Trump EPA undid the Obama administration’s single largest policy aimed at curbing climate change, a rule that forced automakers to rapidly increase the fuel economy of passenger vehicles, and, in so doing, drastically lowering their pollution of heat-trapping carbon dioxide pollution. To do that, the EPA had to follow a long legal path, formally publishing a proposal to change the rule, opening it to public comments, drafting legal, economic and scientific justifications for the rule, and performing complex technical analyses of the impacts of the new rule on highway safety, air quality and consumer behaviour.

Although the Trump administration began its rollback of the Obama auto pollution rule within Mr Trump’s first days of taking office, it was not completed until last spring.

The same timetable could await Mr Biden as he seeks to reinstate the rule.

“It’s a laborious, time-consuming process,” said Richard Revesz, a professor of environmental law at New York University, who was on Mr Biden’s short list to run the EPA.

“No one doubts the EPA’s authority to put these regulations on auto pollution back in place,” Mr Revesz said. “But they can’t just make the Trump rules go away by executive order. They have to follow the same process – preparing all the scientific and economic analyses, and you have to get all that right.”

Mr Revesz noted that while the Obama administration had performed such analyses a decade ago when it first put the auto pollution rule in place, much has changed since then, including the economy, the auto industry and the amount of planet-warming carbon dioxide already in the atmosphere. So Mr Biden’s EPA staff will need to conduct all that work again, with present-day data.

And he noted that after four years in which the staff and budget of the EPA has shrunk, the agency is now being asked to do far more with far fewer resources.

“They want to do a lot, but they can’t do it all at the same time,” Mr Revesz said. “EPA has suffered the loss of a lot of senior staff. They’ll need to prioritise. So they may not get to some of these until the end of a first term.”

Michael Gerrard, director of the Sabin Center for Climate Change Law at the Columbia Law School, said it could take even longer for the EPA to restore the Waters of the United States rule, which was designed to protect the streams, wetlands and smaller water systems that flow into larger bodies of water, such as lakes and rivers. The Trump administration replaced that rule last year with a new rule that stripped away protections of those wetlands and smaller water bodies.

“Replacing that water rule will take a very long time,” Mr Gerrard said. “And they won’t want to rescind the Trump rule while they are working on the new rule, because then the waterways would be left with no protection.”

0 0 0 0
Previous : Welsh Tory leader quits after alleged breach of alcohol ban with Senedd drinks
Next : At the eye of the storm: Wuhan residents reflect on the price paid a year on from the first covid lockdown