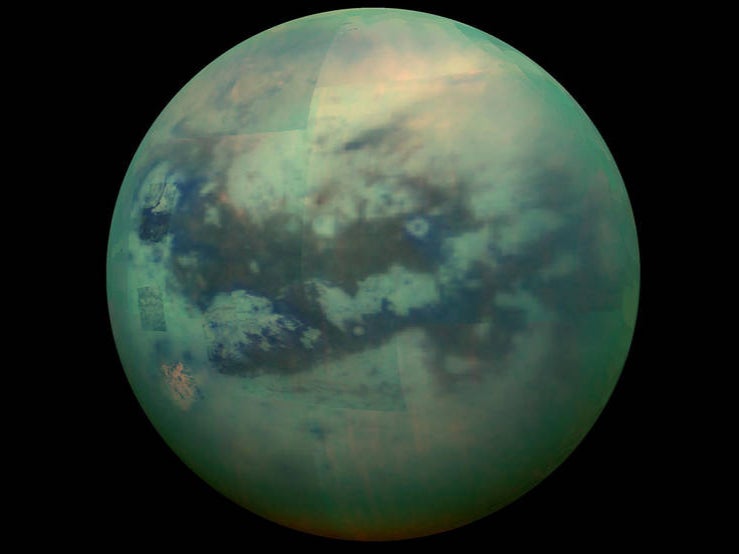 Scientists have suggested that Saturn’s largest moon, Titan, could be navigated using a robotic submarine propelled through its methane ocean.

Astronomers from Cornell University say that the Kraken Mare, a vast body of liquid methane hidden below the gassy atmosphere of the moon, contains almost all of the moon’s liquid at an astonishing depth of 1000 feet.

Despite the different chemical composition, Titan’s rivers, lakes, and oceans bear a striking similarity to Earth’s, while studying the atmosphere of the moon could reveal information about how our planet developed early in its life.

“The depth and composition of each of Titan’s seas had already been measured, except for Titan’s largest sea, Kraken Mare – which not only has a great name, but also contains about 80 per cent of the moon’s surface liquids,” said lead author Valerio Poggiali, a research associate at the Cornell Center for Astrophysics and Planetary Science (CCAPS) in a statement.

Scientists had already managed to calculate the sea bathymetry (depth) on a previous mission in 2014.

While the Cassini T104 mission surveyed a smaller sea, Ligeia Mare, near the moon’s north pole travelling at 13,000mph nearly 600 miles above Titan, it used its altimeter to measure the depth of Kraken Mare.

Back on Earth, researchers could note the time differences from the radar when it hit the sea’s surface and when it returned from the bottom of the ocean, combining that data with the knowledge of how radar energy is absorbed through the liquid.

In the future a submarine would be able to visit and travel through the Kraken Mare, although it is unlikely that the vehicle would have a mechanical engine Poggiali predicts.

“Thanks to our measurements,” he said, “scientists can now infer the density of the liquid with higher precision, and consequently better calibrate the sonar aboard the vessel and understand the sea’s directional flows.”

A prospective mission could reveal the mysterious origin of why there is liquid methane on Titan at all; the light from the Sun, approximately 100 times less intense than that on Earth, continually converts methane in the atmosphere into ethane.

Over a 10 million-year period, this should have completely depleted the stores of methane on Titan’s surface, Poggiali says.