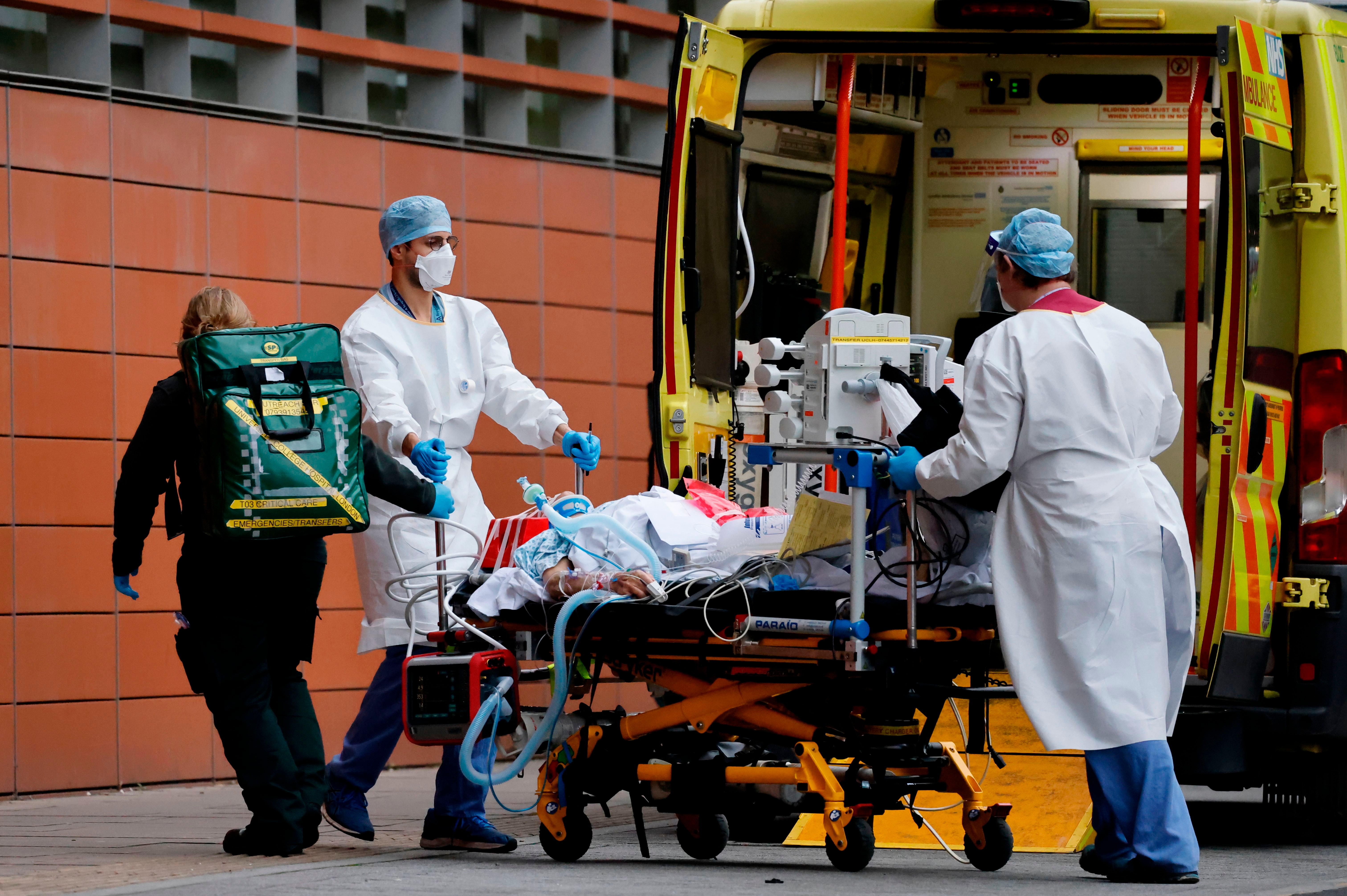 Quarter of all UK deaths from Covid-19 reported in past month, analysis shows

The new variant of coronavirus spreading in the UK could be up to 30 per cent deadlier than the original virus, the government has warned, as analysis revealed that more than a quarter of all deaths from Covid-19 have been reported during the past month alone.

Boris Johnson said there is evidence that the highly-transmissible variant may be “associated with a higher degree of mortality” among those infected – though Sir Patrick Vallance, No 10’s chief scientific adviser, said there was still a “lot of uncertainty” surrounding the findings.

Although no data has been publicly released yet, Sir Patrick suggested the variant could increase the mortality rate by nearly a third for men in their sixties who have Covid-19.

The Covid-19 vaccines are still thought to be effective in neutralising the UK variant, with analysis ongoing, but the government has indicated that it “may have to go further” in tightening border controls to stop other mutated forms of the virus from reaching Britain.

Emerging science suggests that the Brazilian and South African variants – the latter of which has already been detected in the UK – could be capable of escaping parts of the immune response triggered by the vaccines.

The UK variant has meanwhile been attributed to an alarming surge in hospitalisations and deaths that has seen a total of 28,580 deaths reported between 21 December and 22 January  – a reflection of the scale and severity of the ongoing third wave that has gripped the four nations.

Scientists and politicians said it was “horrendous” that more than a quarter of all Covid deaths had been reported over the past four weeks.

Since the beginning of the pandemic, 95,981 people have now died within 28 days of a positive test, the latest government data show.

Speaking during Friday’s Downing Street briefing, Sir Patrick said: “The death rate is awful and it’s going to stay, I’m afraid, high for a little while before it starts coming down, that was always what was predicted from the shape of this.”

Professor Chris Whitty, chief medical officer, for England, said the situation in the UK remained “extremely precarious” and warned that the peak of deaths “may well be still in the future” as the government announced a further 1,401 fatalities and 40,261 new cases on Friday.

During the first wave of the pandemic, it took 55 days for the UK to reach its first 25,000 deaths, which were recorded between 2 March and 25 April.

The Covid-19 death toll then plateaued throughout summer, creeping above the 40,000 mark in mid-June, before beginning to sharply rise at the start of November, culminating in a further 47,953 fatalities to date.

Labour MP and shadow health minister, Jonathan Ashworth, told The Independent: “The scale of deaths from Covid is a tragic reminder of how devastating this virus is.

“Behind every statistic is a family grieving and in pain. It didn’t have to be like this. Every effort must be made to suppress Covid, minimise the number of people who catch it, and save lives.”

The daily figures released by the Department of Health and Social Care includes those people who have died within 28 days of testing positive for Covid-19 – although there is a time lag between a patient dying and appearing in the statistics.

This varies from the more accurate, precise measure of tracking fatalities where Covid-19 is mentioned on the death certificate by date reported.

“Deaths within 28 positive days is not meant to be accurate,” Gabriel Scally, a professor of public health, told The Independent. “It’s a surveillance tool so you can see whether deaths are going up or down against a constant set of parameters.

However, the record for the most deaths reported on one day was set earlier this week, on 20 January, when the government announced 1,820 further fatalities.

Prof Scally, a member of Independent Sage, which shadows and scrutinises the government’s Scientific Advisory Group for Emergencies (Sage), described the loss of more than 28,000 lives in just one month as “horrendous”.

“It reflects the scale of the infection over the last couple of months,” he said. “We’ve been trucking along at really high levels and that just accumulates deaths and disease.

“It also reflects the winter, people being a lot more inside, the virus finds it easier to spread with the lack of ventilation. In many ways it’s a failure of our contact tracing as much as anything else.

“We know that a lot of people don’t self isolate and that there are a lot of asymptomatic people who we’ve not been able to test and fit.”

He added that the loosening of restrictions in autumn and the shift to tiered restrictions had helped to set the UK on its current trajectory, and that the brief November lockdown had come far too late to make a difference.

“The Independent Sage called for lockdowns from September, it never really happened and then we had the second wave,” he said. “It came down a bit and there was more loosening. But because it never really got down, it surged back again.

Prof Scally warned that the UK was becoming desensitised to the sheer scale of suffering and death being witnessed on a daily basis. “I hope the reason why it hasn’t really struck us that it’s been so bad is we’re just getting acclimatised to this terrible toll going on day after day.”

Professor Stephen Griffin, a virologist at the University of Leeds, said the “seeds of this dreadful recent death toll were sewn in the summer of 2020”.

“The second wave of Sars-CoV-2 infections in the autumn and winter was predicted by numerous quarters and arose all the more quickly due to the failure to suppress infections over the summer as well as importation of new cases from abroad,” he told The Independent.

“The north retained a higher level of infection, and this is why prevalence increased there first. Mixing caused by schools and universities returning compounded the issue, as did the encouragement for everyone to get back to work in August.

“This not only led to a more rapid resurgence per se, but also provided a fertile breeding ground in which the new, more transmissible variant arose and continued to spread.

“The decision to ignore Sage in September pressing for a short, sharp lockdown was a massive mistake – at the time we were in the early phase of exponential growth and the variant was also geographically limited. The parties responsible for preventing this now have blood on their hands.

“The half-baked ‘lockdown’ in November only delayed the inevitable, whilst the mixed messaging over Christmas also clearly increased mixing and spread.”

Earlier on Friday, new estimates from the Office for National Statistics showed that more than 1 million people in England had Covid-19 last week.

One in 55 people were infected with the disease between 10 and 16 January – the equivalent of 1.02 million people, or 1.88 per cent of the population.

The ONS said the “percentage of people testing positive for coronavirus remained high” but had “decreased slightly”.

Prof Whitty said: “In terms of the infection rate, if you took the country as a whole and just averaged it, then the number of infections is broadly going down but it is at a very high level, and it is extremely precarious – I really want to stress this.

“A very small change and it could start taking off again from an extremely high base, and there are some areas of the country and some age groups in which it does not appear to be going down – for example in people [aged] 20-30, the evidence is that it may still be increasing in some parts of the country.”

Sage has meanwhile warned that the community prevalence of Covid-19 will be higher than it was during the first national lockdown in the spring of 2020 – even if the R rate remains below 1 until mid-February.

Data shows that, at present, infections are falling somewhere around a quarter every fortnight, compared with a halving back in April.

Sage said on Friday that coronavirus cases remain “dangerously high and we must remain vigilant to keep this virus under control”.

It is thought that a combination of factors, such as the highly-transmissible new variant of coronavirus circulating in the UK and the slightly lesser restrictions in the current national lockdown compared to the first one, could be contributing to the slower decline.

The slow decrease in infections suggests that national restrictions could persist beyond spring and into summer, with the prime minister saying on Friday that he favours a cautious approach to easing lockdown to prevent the nation being shut back down again by a resurgence of Covid-19.

“I think we will have to live with coronavirus in one way or another for a long while to come. I think it is an open question as to when and in what way we can start to relax any of the measures.”

He also admitted that the government may have to introduce more border restrictions to stop new variants of the virus from spreading in the UK. “We may have to go further,” he said.

0 0 0 0
Previous : Teacher absences due to Covid six times higher than for pupils in primary schools
Next : California hits record 764 Covid deaths in one day