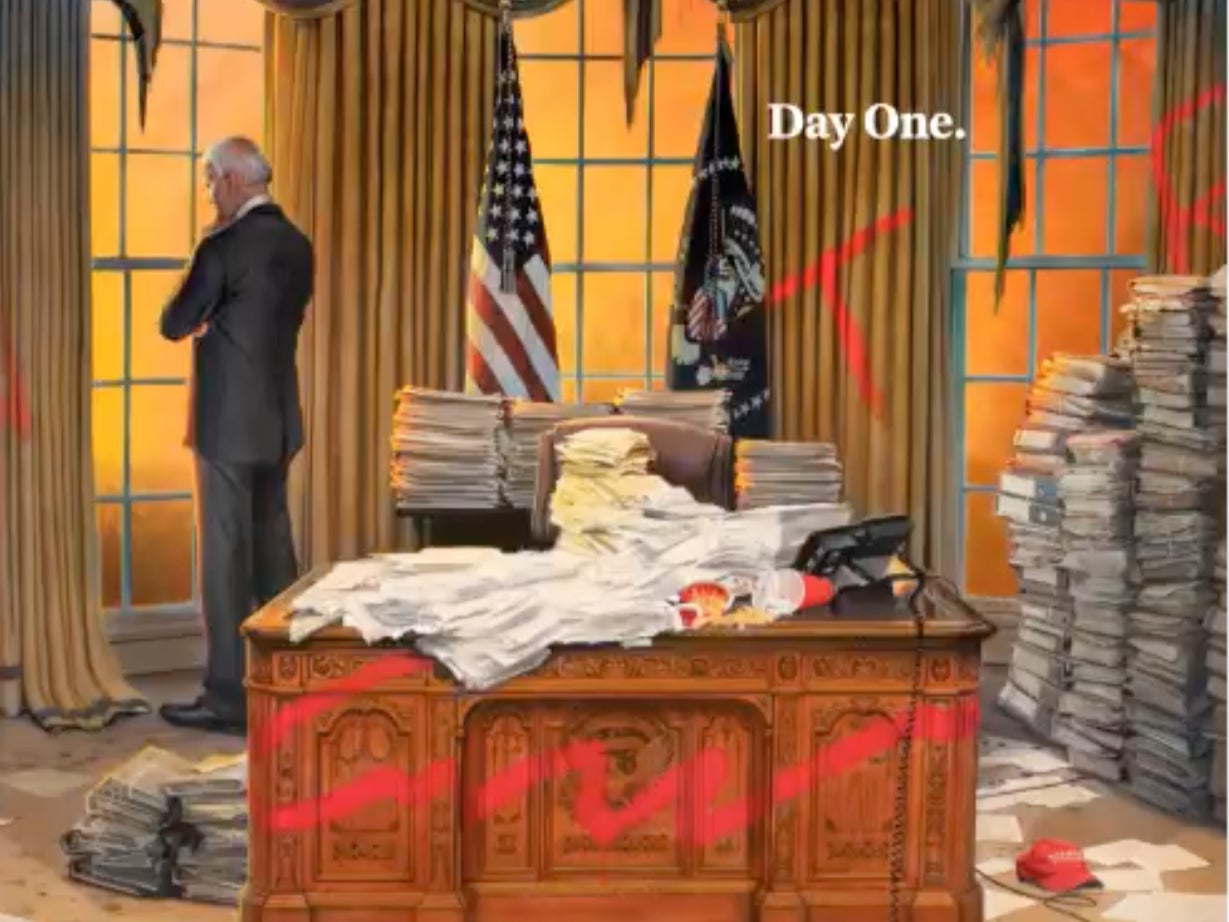 The front page of the magazine’s 1-8 February double issue shows President Joe Biden on his first day in the role, looking out of an Oval Office window surrounded by fire.

The Resolute Desk is covered by files and fast food packaging, while documents are strewn on the floor and a “Make America Great Again” hat lies next to a bullhorn.

Responding to the cover on Fox News on Friday afternoon, Faulkner denounced it, calling the satirical image a “complete lie”.

Faulkner added: “That’s not real! That picture isn’t real! Don’t we care — I thought we are a nation that cared about the facts?”

Social media users were quick to mock Harris for her comments, with Vox journalist Aaron Rupar tweeting: “Harris Faulkner appears to be unfamiliar with the concept of satire.”

CNN reporter Oliver Darcy wrote: “Does Faulkner not understand … that … TIME’s cover art is figurative?” while @aegkandel responded: “Its literally a drawing.”

Fox News gave favourable coverage to Mr Trump throughout his presidency, and author Don Winslow responded to the clip: “You work for @FoxNews. So I would never talk about ‘facts’ again.”

Mr Trump was first featured on the cover of Time in January 1989, 28 years before he took the oath of office to become the 45th US president.

That cover featured the headline: “This Man May Turn You Green With Envy – or Just Turn You Off. Flaunting it is His Game, and Trump is his Name.”

Mr Trump, who has a long-standing obsession with Time, falsely claimed in 2017: “I have been on their cover like 14 or 15 times. I think we have the all-time record in the history of Time Magazine.”

However, by that point Mr Trump had been on the cover 11 times, and at the time of writing has only featured on 35 occasions, which is the fourth most of anyone.

He is still 20 covers short of former President Richard Nixon, who was on the cover of Time on 55 occasions and was named Person of the Year twice.

Earlier that year, Mr Trump was even asked by Time to remove fake covers of the magazine bearing his image and name from his golf clubs after pictures of them were shared on social media.

The Washington Post reported that a framed Time cover featuring Mr Trump alongside the headline: “Donald Trump: The ‘Apprentice’ is a television smash!” hanging at his Mar-a-Lago resort in Florida was not authentic.

The cover, which was dated the same as one featuring actress Kate Winslet from 2009, was reportedly displayed in four other golf clubs owned by Mr Trump across the US.

0 0 0 0
Previous : Tories launch investigation into antisemitism allegations
Next : ‘Lucky carrots’ led to £119,000 EuroMillions win for couple who had not much ‘left to live on’