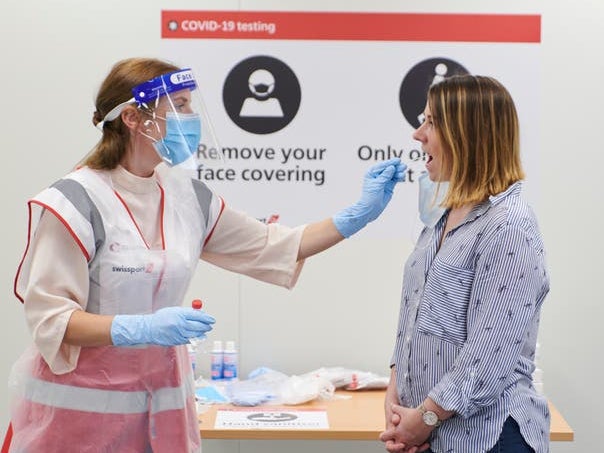 Covid UK news update: Latest cases as £500 could be paid to people with coronavirus

The government has considered the possibility of closing the borders to all foreign travellers to prevent new strains of Covid being spread in the UK, cabinet minister George Eustice has said.

It comes amid reports the prime minister is being urged by his cabinet colleagues to impose the draconian measure while the government presses ahead with the roll-out the Covid-19 vaccine.

Pressed on speculation and whether he would like to see a temporary closure of British borders to foreign visitors, Mr Eustice told Sky News: “We always keep these things under review. It’s been considered.”

The environment secretary said that while he thinks the quarantine and testing requirement are sufficient, the government “can’t rule anything out”.

Mr Eustice’s remarks follow reports that people who test positive for Covid could be paid £500 in a bid to boost self-isolation figures after research revealed many could not afford to take the time off work.

Highest proportion of adults ‘staying at home’ since May 2020, ONS survey finds

More than six in ten adults (65 per cent) reported staying at home or only leaving for work, exercise, essential shopping or medical needs in the past seven days; the highest proportion reporting this since May 2020.

The statistics agency also found that the proportion of employed adults that have worked remotely was at its highest since June 2020, with 45 per cent reporting having done so this week compared with 43 per cent last week.

Meanwhile, compliance with most measures to stop the spread of the coronavirus remained at high levels. The same percentage as last week reported ‘always’ or ‘often’ washing their hands after returning home (90 per cent), wearing a face mask (96 per cent) and avoiding physical contact when outside their home (93 per cent).

Poland could take legal action against Pfizer next month if the US drugmaker does not deliver all scheduled doses of its Covid-19 vaccine, a government spokesman said on Friday.

Pfizer, which developed the vaccine with its German partner BioNTech, has reduced the volume of the vaccine it will deliver to European Union countries this week.

Pfizer and BioNTech have declined to comment on the cuts beyond a statement last week which announced cuts to deliveries as they ramp up manufacturing in Europe.

Police break up wedding with 400 guests in north London school

A wedding attended by some 400 guests in a school in north London was broken up by police last night, with the organiser facing a £10,000 fine.

The windows of the building in Egerton Road, Stamford Hill, had been covered to stop people looking in to the school where around 400 people had gathered for a wedding in breach of Covid-19 regulations, the Metropolitan Police said.

Many of the attendees ran away as officers arrived but the force said the organiser will be reported for consideration of a £10,000 fine, while five others were handed £200 fixed penalty notices.

Detective Chief Superintendent Marcus Barnett said: “This was a completely unacceptable breach of the law, which is very clearly in place to save lives and protect the NHS. An NHS that is under considerable pressure at a time when Covid-19 has killed nearly 100,000 people.

“This is a deadly and very dangerous disease. We can all see that and we must act responsibly. “People across the country are making sacrifices by cancelling or postponing weddings and other celebrations and there is no excuse for this type of behaviour.

He added that officers will “not hesitate to take enforcement action if that is required to keep people safe”.

Northern Ireland has registered its highest weekly death toll since the coronavirus pandemic began, with 156 fatalities recorded in the seven days up to 15 January.

The agency confirmed: “Latest figures published today by Nisra show that 156 deaths involving Covid-19 occurred in the week 9 to 15 January 2021, the highest weekly number since the pandemic began.”

Herd immunity through vaccination near impossible, scientists warn as they ask everyone to get the jab

People must not rely on their neighbours being vaccinated to protect themselves from the coronavirus, scientists have warned as they underlined that herd immunity will not be “pretty much impossible” through vaccination or natural infection as the new UK variant is too transmissible.

Prof Paul Hunter from the University of East Anglia (UEA) told Radio 4’s Today programme that while the jabs will life to return to near-normal for large parts of society, those who refuse get vaccinated will not be protected by herd immunity.

Prof Hunter said: “If you are uncertain about whether you want the vaccine or not – and especially if you’re a vulnerable person – you cannot rely on the fact that your neighbours have been vaccinated, so please, please, please make sure you go and be vaccinated yourself.”

He said that going into next winter, those who have not been inoculated will be at risk from coronavirus, and so the UK must ensure “we have appropriate tracking and tracing systems in place so that we identify where local outbreaks are occurring early enough to stop them.”

A UEA study initially found that 69 per cent of the population would need to be given the Pfizer jab, or 93 per cent the Oxford vaccine, to bring the R number below 1.

However, when the new UK variant was accounted for, the modelling showed that these rates only brought the R number to 1.3.  The Pfizer vaccine would require 82 per cent of the population to be vaccinated to control the spread of the new variant.

Prof Alastair Grant, also from the UEA,  said the combination of “relatively low headline efficacy and limited effect on asymptomatic infections” means the Oxford vaccine “cannot take us to herd immunity, even if the whole population is immunised”.

He said: “For this reason, we recommend that health and social care workers, and others who have lots of contacts with those vulnerable to infection, should receive one of the mRNA vaccines in preference.

“The Oxford vaccine will no doubt be an important control intervention, but unless changes to the dose regime can increase its efficacy, it is unlikely to fully control the virus or take the UK population to herd immunity.”

One in four hesitant to share contacts due to ‘lack of trust’ in test and trace system, adviser says

Some people are unwilling to provide their contacts for test and trace because of a “lack of trust” in the system, according to Professor Susan Michie, a member of the Government’s Scientific Pandemic Insights Group on Behaviours.

She told BBC Radio 4’s Today programme: “Only 76 per cent of people intend to share their contacts because I think there is a lack of trust in the system.” She attributed this to test and trace relying on call centre employees rather than “local trusted public health infrastructure that people are familiar with”.

Prof Michie also stressed the role of income on disparities in testing, saying: “Another problem is this £10,000 fine which we know is now deterring lower-income people from coming forward to be tested.

“In Liverpool when they did the mass testing evaluation, the most deprived communities were 20 times as likely to be infectious but 20 times less likely to get tested and in the most deprived areas it is only 4 per cent of people coming forward to be tested. This is a massive problem that urgently needs to be addressed.”

Less than one in five with symptoms isolating for 10 days, government adviser says

Less than one in five people (18 per cent) with coronavirus symptoms are self-isolating for the full 10 days as instructed, a government adviser has suggested, adding that a £500 payment will not be enough for some households.

Professor Susan Michie, of the Scientific Pandemic Insights Group on Behaviours, told BBC Radio 4’s Today programme: “There will be people, for example single earners in a household looking after a family where £500 over 10 days, £50 a day, is not enough to pay the rent, to pay all the bills and put food on the table.

“There is a particular group of people who would need more from that £500 but at least the government is recognising this is a key weakness in the whole pandemic strategy. If you have 82 per cent of people with symptoms wandering around the community it is very, very difficult to bring this level down.”

Prof Michie’s remarks follow findings from UCL’s Covid-19 Social Study, which showed that 38 per cent of respondents said they self-isolated for less than 10 days after developing symptoms.

She added: “I think the question is, how does one get enough funds to compensate people for lost wages, especially for people in the gig economy and (the) precarious economy quickly and without complicated forms?”

Germany’s coronavirus death toll has passed 50,000, with fatalities increasing rapidly in recent weeks even as infection figures are finally falling.

The country’s disease control centre, the Robert Koch Institute, said on Friday that another 859 deaths were reported over the past 24 hours, bringing the total to 50,642.

Germany had a comparatively small number of deaths in the pandemic’s first phase and was able to lift many restrictions quickly.

However, infection levels have jumped in the autumn and winter months, with health authorities reporting hundreds of deaths – sometimes more than 1,000 – daily in the country of 83 million people recently. Germany hit the 40,000 mark on 10 January.

Boris Johnson will hold a Downing Street press conference at 5pm, No 10 has said.

A serving Metropolitan Police officer has died after testing positive for Covid-19, the force has announced. He is understood to be the first serving Met officer to have died after being diagnosed with the coronavirus since the start of the pandemic.

Pc Michael Warren, 37, joined the Met in 2005 and had served as a Territorial Support Group (TSG) officer for the last four years.

Pc Warren had been shielding at home as he was classed as “vulnerable”. He had been working remotely to help his team, the Met said.

He died on Tuesday morning after testing positive for Covid-19 earlier this week, leaving his parents Pauline and Alan, his partner Vicky and his daughter Eden, eight, and son Joseph, five.

0 0 0 0
Previous : Brian Rose's Real Deal: Sadiq Khan Is Wasting Our Money & Running Our City Into The Ground | TRAILER
Next : British shoppers hit with unexpectedly high fees on products from EU after Brexit