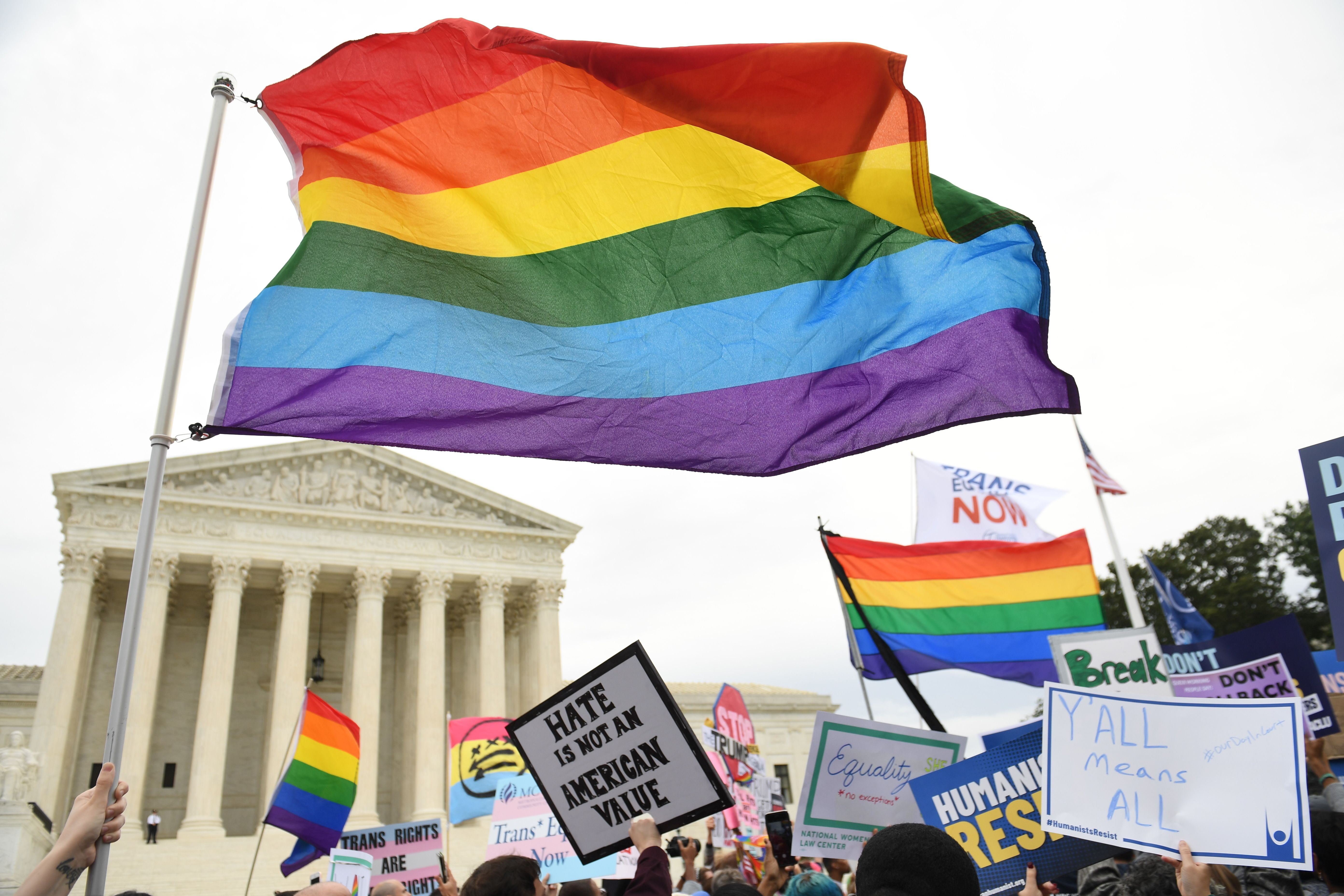 On his first day in office, President Joe Biden issued a sweeping executive order making clear that gay and transgender people are protected against discrimination in the workplace, schools, health care, and other realms of American life.

The executive order outlines a broad interpretation of last year’s landmark Supreme Court ruling that gay and transgender employees are covered by Title VII of the Civil Rights Act of 1964, which prohibits discrimination “because of sex.”

The Trump administration had interpreted that decision in Bostock v Clayton County narrowly and only applying to employment.

The executive order calls on agencies across the federal government to review existing regulations and policies that prohibit sex discrimination, and to revise them as necessary to clarify that “sex” includes sexual orientation and gender identity.

“Children should be able to learn without worrying about whether they will be denied access to the restroom, the locker room, or school sports,” Mr Biden’s executive order states. “Adults should be able to earn a living and pursue a vocation knowing that they will not be fired, demoted, or mistreated because of whom they go home to or because how they dress does not conform to sex-based stereotypes. People should be able to access healthcare and secure a roof over their heads without being subjected to sex discrimination.”

The executive order set the stage for an administration that has pledged to advance LGBT+ rights more than any presidency before, and that has already named LGBT+ leaders to prominent positions in the administration.

LGBT+ advocates celebrated the move as a crucial step toward tolerance and equity for a community that has long lacked protections under federal law. Alphonso David, president of the Human Rights Campaign, called it the most “wide-ranging” executive order concerning sexual orientation and gender identity ever issued by a US president.

“We have a new administration that values inclusion and we have a government that has a responsibility to represent all of us,” Mr David said.

But Mr Biden’s action also outraged some social conservatives, who said that it would threaten the rights of women- an argument often used by right-wing groups who oppose transgender rights. On Thursday, the day after the order was issued, the hashtag #BidenErasedWomen was trending on Twitter.

“On the same day he called for healing and unity, President Joe Biden signed a radical divisive transgender executive order that threatens the privacy and safety of women in single-sex facilities, equality and fairness in single-sex sports, and good medicine based on the reality that males and females are biologically different,” said Ryan Anderson, a fellow at the conservative Heritage Foundation.

As the debate over the executive order grew on social media, transgender advocates quickly pushed back against claims it would erode the rights of women.

“President Biden most certainly did not ‘erase women’ – whatever that means,” wrote Chase Strangio, deputy director for transgender justice at the American Civil Liberties Union. “By stating the administration’s intention to follow Supreme Court precedent and federal law, at core all the newly-elected president did was lay out what the law is and agree, unlike his predecessor, to follow it.”

Many of the arguments against the executive order focused on a perceived threat transgender women pose to women’s sports, an idea that transgender advocate Gillian Branstetter called “opportunistic and deeply unfounded.”

More than 16 states have policies that facilitate full inclusion of transgender students in high school sports, and “and have for quite some time,” said Ms Branstetter, a spokeswoman for the National Women’s Law Center. “Last I checked, girls athletics did not vanish,” from those states, she said.

The executive order also drew opposition from some religious conservatives hoping to seek compromises with the Biden administration.

Russell Moore, president of the Ethics and Religious Liberty Commission of the Southern Baptist Convention who has famously spoken out against President Trump said he takes Biden at his word that he wants to “see unity.” Mr Moore said he does not believe that anyone should be mistreated, and believes all Americans should be treated with dignity and respect.

But he argued that scripture makes clear, “you are male or female.”

“You won’t see Christians in the Orthodox areas who will like these orders,”Mr Moore said.

The Biden presidency has already marked a drastic shift from a Trump administration that repeatedly erased protections for transgender people- in healthcare, federal employment, federal prisons, homeless shelters and schools.

Betsy DeVos rolled back civil rights protections for transgender students less than two weeks into her tenure as Education Secretary. The department later stopped investigating civil rights complaints from transgender students who were locked out of bathrooms that matched their gender identity. On 8 January, two days after Ms DeVos resigned, the department circulated a memo asserting that the Bostock case did not apply to schoolchildren.

Eliza Byard, executive director of GLSEN (American education organisation with the aim to end discrimination, harassment, and bullying based on sexual orientation), said the Biden administration is sending “a clear message to students across the country who have been facing really vicious and harmful and gratuitous attacks from the bully pulpit of the Department of Education for four years.”

Francisco Negrón, Jr, the chief legal officer for the National School Boards Association, said despite such efforts, under the Trump administration, transgender students continued to win more court cases affirming their right to use facilities that match their gender identities. He said more school systems have also adopted inclusive bathroom policies, and that the ruling in Bostock has largely affirmed that transgender students have a right to access bathrooms in line with their gender identity.

Amid these advancements, Republican state lawmakers have already filed a wave of bills attempting to ban medical professionals from treating transgender teens with hormones and gender-affirming surgery and restricting transgender students’ participation in sports according to their gender identity.

South Dakota was one of the states that last year attempted to pass legislation that would have criminalised medical professionals for treating transgender youths with hormone blockers and surgery.

“The division in this country is so strong right now that trans issues are not going to be resolved simply,” said Percival Rayne Ereth.