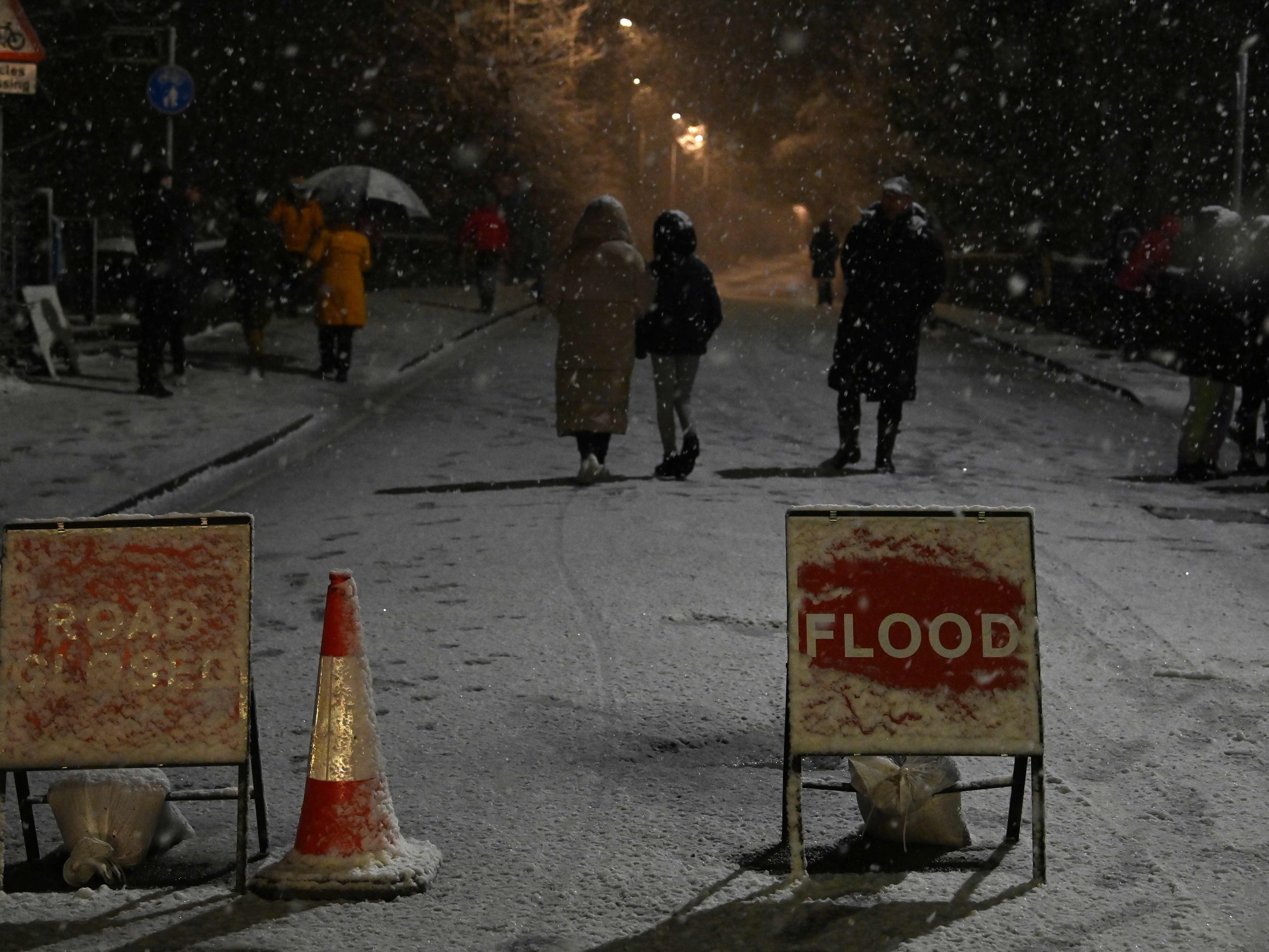 Parts of England and Wales have been hit by flooding, with homes and streets covered in water and even more people forced to evacuate properties.

It comes after thousands of people had spent the night away from their homes over flooding fears.

Homes have been flooded following heavy rainfall and snow showers in Cheshire, where three “danger to life” flood warnings remained in place on Thursday afternoon.

One woman said she “watched the water coming through the back door” of her house in Lymm in the early hours of Thursday morning.

Gabrielle Burns-Smith said: “By 3pm yesterday the water outside was shin-deep and by 4pm it was knee-deep, and we were seriously worrying that the house was going to be breached. Then it was.”

Dozens of care home residents were among people evacuated to safety after Storm Christoph brought heavy rain and flooding to parts of northern England, including Northwich – where police said the town centre was “under numerous inches of water”.

Police said streets were flooded and a “large number of properties” evacuated in the Welsh village of Skewen, after a “flooding incident” around Thursday midday.

Elsewhere in Wales, emergency teams were called out to protect supplies of the Oxford University and AstraZeneca coronavirus vaccine following flooding at Wrexham Industrial Estate.

More than 160 flood warnings remained in place across England and Wales on Thursday afternoon, meaning flooding was expected.

More than 2,000 homes were evacuated in Manchester the night before, with residents told to leave properties in the Didsbury and Northenden areas of the city as the River Mersey’s water levels rose amid heavy downpours — and snow — from Storm Christoph.

Vulnerable and elderly people were put up in hotels, while others were guided to a nearby community centre and mosque — with ice, wind and social distancing guidelines adding to difficulties.

Smaller numbers of people were also asked to leave their homes in parts of Ruthin and Bangor on Dee in North Wales, as well as Maghull in Merseyside.

In North Wales, people evacuated sheltered in a church hall before being found accommodation by Wrexham Council.

“It’s been an anxious and difficult night,” Richard Kilpatrick, a councillor with Manchester City Council — and himself a Didsbury evacuee — told The Independent. “We have been telling to leave their home to stay safe when, for the past 12 months, they have been told the exact opposite:to stay home to stay safe. So, there is a contrast there that has been difficult. But there has been so much togetherness. The community has really pulled together.”

It was a waiting game, he said. River levels have gone down overnight and the deluge has paused. But more rain was forecast Thursday.

“It’s a better picture this morning,” Cllr Kilpatrick added. “But we are not out the woods yet.”

On a visit to Disbury, Boris Johnson said the Environment Agency had used sluice gates and “improvised emergency flood defences”.

“I think 10,000 homes in the Manchester area, in the Didsbury area, have been protected just as a result of what they have been doing overnight,” the UK prime minister told reporters.

A severe flood warning for parts of Manchester was stood down on Thursday, with the “worst-case scenario” avoided when the Didsbury Basin did not “significantly overflow”, the city council said.

“However, high water levels have flooded some gardens and some roads remain closed,” the authority said in a statement.

Mr Johnson hosted a Cobra meeting on Wednesday and urged people that night to heed the flood warnings and evacuate their properties when told to do so.

The prime minister emphasised that the current Covid rules allow people to leave their homes in an emergency and insisted the government was “totally prepared” for the potential duel crisis of coronavirus and flooding.

He added: “There are some times where I have been to scenes where, alas, people have decided not to obey the advice and not evacuated.

“It is their right not to do so if they choose — it’s always people’s right to stay wherever they are.

“But it really is advisable — follow the advice. If you are told to leave your home then you should do so.”

Public transport has been disrupted by the weather too.

The East Coast Main Line between Darlington and York was flooded and bus replacement service set up, while there were also warnings that trains between Leeds and York could be affected.

0 0 0 0
Previous : ‘She’s over it’: Videos and photos show Melania delighted to be out of White House
Next : Tuition fees to be frozen for another year under government plans