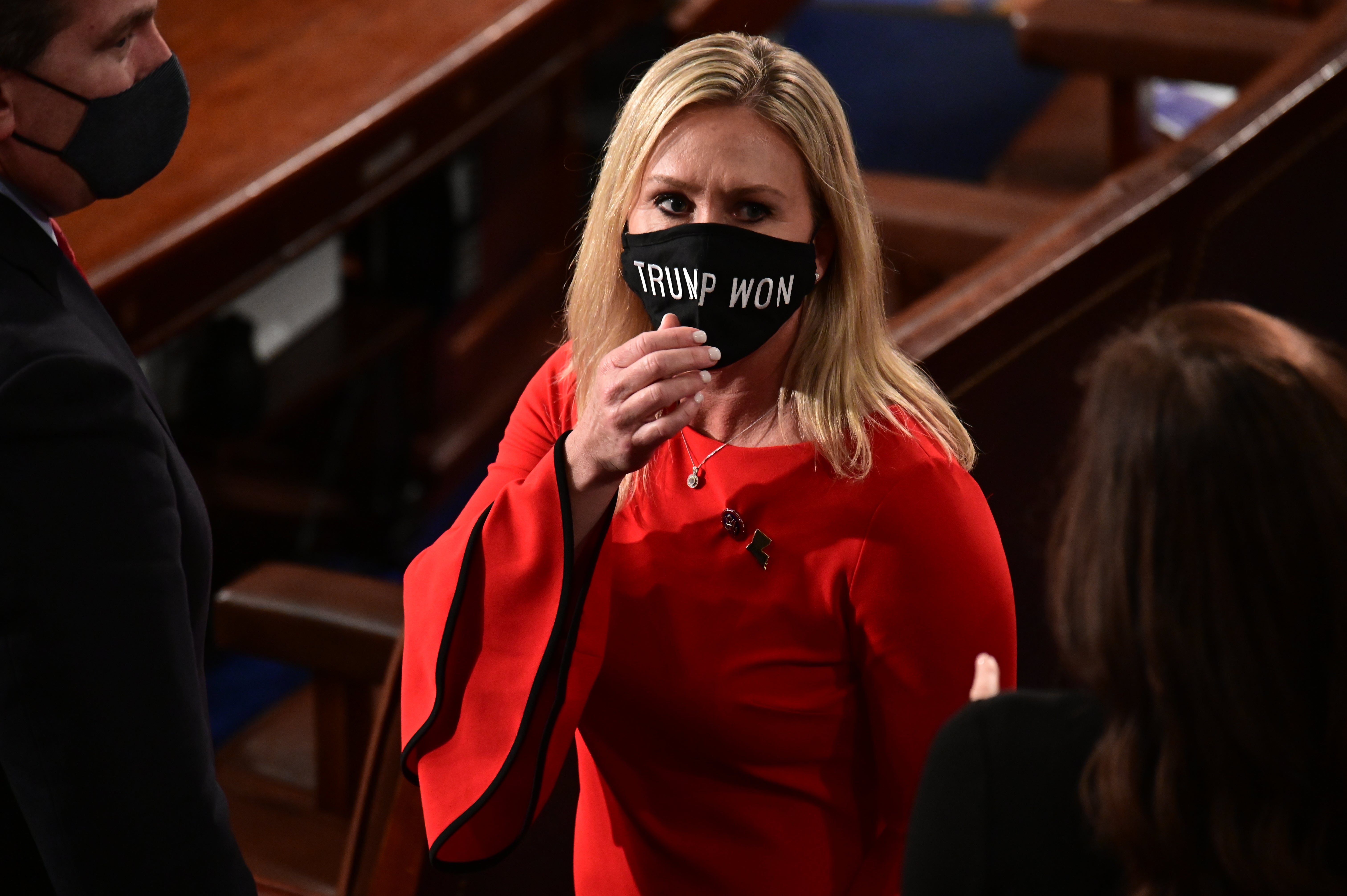 The lawmaker, who has ties to the baseless QAnon conspiracy theory, took to Twitter to announce her action against the new president.

“I’ve just filed articles of impeachment on president Joe Biden, we will see how this goes,” she said.

Ms Greene, who is a pro-Trump election fraud conspiracy theorist, was able to use the social media platform after being banned from it for 12 hours last weekend.

Twitter blocked her account for violating the rules it put in place following the violence at the 6 January Capitol riot.

Ms Greene has also been accused of posting false flag conspiracy theories on Facebook about the Parkland High School shooting, according to Forbes.

Seventeen students and staff at Marjory Stoneman Douglas High School in Parkland, Florida, died in a mass shooting on 14 February 2018.

Her stunt comes less than a month into her first term in Congress and is destined for quick failure as the Democrats now control the House and Senate, in addition to the White House.

The congresswoman filed the articles over debunked claims of corruption against Mr Biden and his family in Ukraine, Russia and China.

Mr Biden has rubbished claims he made any decisions while in office that were based on his son Hunter Biden’s overseas business interests.

A Senate investigation by Republicans last year found no evidence of corruption against the president and no evidence that his son’s work for Burisma, an oil company, influenced US foreign policy.

“President Joe Biden is unfit to hold the office of the presidency. His pattern of abuse of power as President Obama’s vice president is lengthy and disturbing,” said Ms Greene in a statement.

“Yesterday’s inauguration looked like a one party military state takeover with 30K troops,” she tweeted.

“People were told not to go and flags were planted to show the fake support.

“Biden calls for unity after the Dem party has attacked & continues to attack anyone that disagrees with them.”

On inauguration day she also referred to the new president in a tweet as “a clueless Grandpa.”

She was among the 139 representatives and eight senators who opposed Electoral College results from Arizona and Pennsylvania confirming Mr Biden’s win over Donald Trump.

Ms Greene also alleged that there was voter fraud in her home state that resulted in Mr Biden’s close win in Georgia , but that her win was totally legitimate and that her vote count was accurate.

Republican officials who oversaw the election in Georgia have repeatedly debunked her false claims of voter fraud and Mr Biden’s win was confirmed after a string of checks and hand recounts.

Ms Greene won her house seat in November and represents Georgia’s 14th Congressional District, which includes almost all of the northwestern part of the state.

Donald Trump campaigned on her behalf and even called her a “future Republican star.”

She then spoke out against Mr Trump’s historic second impeachment, for inciting insurrection at the Capitol.

“Democrats’ impeachment of President Trump today has now set the standard that they should be removed for their support of violence against the American people,” she said during the House hearing.

GOP colleagues have gone out of their way to denounce Ms Greene and others in her conspiracy theory wing of the party.

“She’ll keep making fools out of herself, her constituents, and the Republican Party,” Republican Senator Ben Sasse wrote in the Atlantic.

“If the GOP is to have a future outside the fever dreams of internet trolls, we have to call out falsehoods and conspiracy theories unequivocally. We have to repudiate people who peddle those lies,” he added.