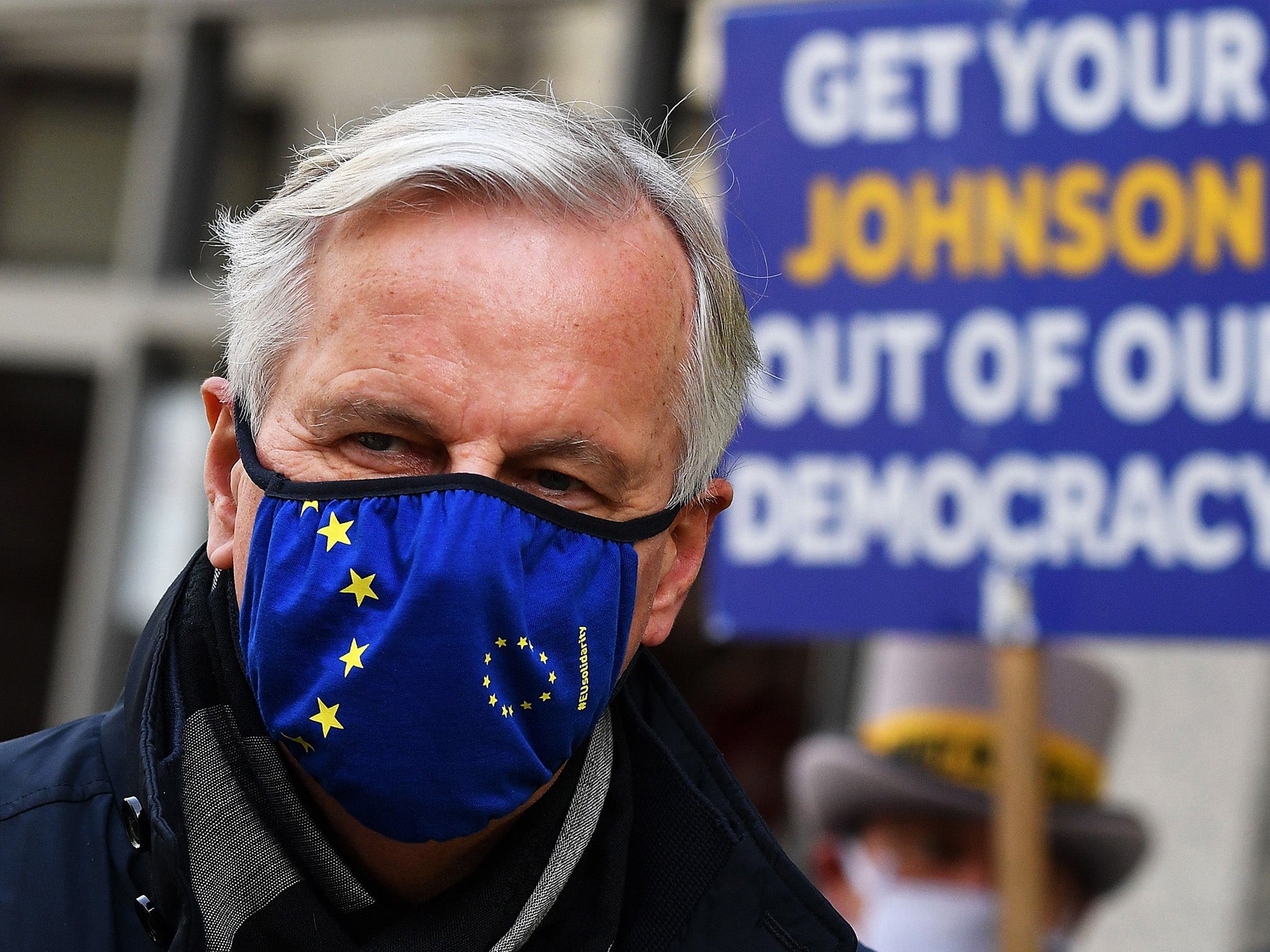 ‘Too early to say’ if lockdown will end by summer, Boris Johnson says

Michel Barnier has waded into a row over the status of European Union diplomats in the UK after Brexit, warning the government in Westminster to “be very careful” after it emerged the bloc’s representative in London had not been given the same status as other ambassadors.

The Foreign Office is refusing to grant EU ambassador Joao Vale de Almeida the same diplomatic status afforded to representatives of individual nation states but Mr Barnier insisted the bloc cannot be treated solely as an international organisation, urging both sides to instead reach a “clever and objective solution”.

Her Cabinet colleague Brandon Lewis, the Northern Ireland secretary, had argued that the coronavirus crisis, not the end of the transition period, was solely to blame for the shortages before Ms Truss contradicted him, blaming “both of those issues”.

Tory MP Julian Knight, who chairs the Digital, Culture, Media and Sport Committee, labelled the cancellation of Glastonbury Festival for the second year in row “devastating”.

In a string of tweets, he admonished ministers for failing to heed pleas to protect the UK’s “vibrant and vital” festivals sector.

Mr Knight had previously warned there would be no festival season this year without government support.

Up to 200 lorries a day turned back from border, MPs told

Up to 200 lorries a day are being turned back when attempting to cross from the UK into the EU because they lack the proper paperwork, officials have said.

Emma Churchill, the head of the border and protocol delivery group at the Cabinet Office, said between 3 per cent and 8 per cent of HGVs were getting turned away at the ports, though she added traders have been better prepared than was feared.

Ms Churchill was addressing the Public Accounts Committee earlier, where MPs accused officials of downplaying the difficulties of moving goods to Northern Ireland after the introduction of post-Brexit border checks.

The Musicians’ Union has told MPs they should urgently fix the music streaming model to make it a “real source of income” for artists.

The union said the coronavirus pandemic had made it more apparent that “streaming royalties are woefully insufficient” as musicians are currently unable to make money from live events.

In a written submission to the Digital, Culture, Media and Sport Committee inquiry into the economics of streaming, the industry representatives said artists should be given a larger share of profits from streaming, adding that “creators face a lack of transparency, lack of trust, royalty distortions and inefficiency” when dealing with the platforms.

Bars and restaurants should not reopen before May, government adviser warns

Sage member Dr Marc Baguelin, from Imperial College London, has warned the premature reopening of the hospitality sector would lead to, at best, a “very, very unsustainable level of pressure on the NHS”.

“Something of this scale, if it was to happen earlier than May, would generate a bump in transmission, which is already really bad.”

Speaking at an event hosted by the European Movement Ireland, Mr Barnier, who was the bloc’s chief Brexit negotiator, said that while relations will not be “business as usual”, he insisted the EU cannot be treated solely as an international organisation.

“I hope we will be able together to find a clever and objective solution to the status of the EU in London,” he added. “I think it would be wise in my view for the UK to find a clever solution.

“We will see what will be the final decision of the UK on this point, but they have to be very careful.”

Our Political Correspondent Ashley Cowburn has followed the story so far:

Hundreds of millions in tax lost as border checks relaxed

Taxes totalling £800m could go unpaid this year because of border checks on lorries being scaled back to avoid queues at ports after Brexit, MPs have been told.

HMRC accepts that money will be lost because of a decision to prioritise free flow of traffic over revenue protection, chief executive Jim Harra told the House of Commons Public Accounts Committee. The committee heard that significant queues have so far been avoided at ports like Dover.

But border delivery group chief executive Emma Churchill said that an average of about 5 per cent of trucks – up to 200 a day – have been turned back for having the wrong paperwork or failing to provide a negative Covid test.

More on this from our Political Editor Andrew Woodcock here:

Up to Joe Biden whether to remove Churchill, says Downing Street

Downing Street has declined to criticise Joe Biden for removing a bust of Sir Winston Churchill from the Oval Office, despite Boris Johnson’s infamous attack on Barack Obama for the same move.

The prime minister said in 2016 — in comments widely condemned as racist — that Mr Obama removing the sculpture “was a symbol of the part-Kenyan president’s ancestral dislike of the British Empire”.

But Mr Johnson’s official spokesperson on Thursday said the same move by Mr Biden was “up to the president” after the Democrat took over the White House from Donald Trump.

“The Oval Office is the president’s private office and it’s up to the president to decorate it as he wishes,” the spokesperson said.

The education secretary has launched the “Skills for Jobs” white paper, setting out the government’s plan for education reform, focusing on vocational training.

Gavin Williamson said the white paper will ensure skills training matches “what employers want and need” and will help  rebuild the economy after the pandemic.

Labour’s Kate Green, the shadow education secretary, welcomed the plans but said the government had been too slow to recognise the need for reform.

“Even when the government get things right – and there are certainly measures in this White Paper that we on these benches have been calling for, for some time – they come too late, leaving families, businesses, and our country paying the price,” she said.

Speaking as Labour revealed a plan to force a vote in the Commons to protect the working hours limit and holiday pay entitlements, Mr McDonald said:  “Scrapping the 48-hour working week cap could mean many key workers feel pressured to work excessive hours. The government should be focused on securing our economy and rebuilding the country, not taking a wrecking ball to hard-won rights.

“The government’s true colours are on full display once again and it’s clear their priorities couldn’t be further from those of workers and their families. But on Monday MPs across the House will have a chance to vote on the side of working people and protect our key workers.”

Boris Johnson: ‘Too early to say’ if lockdown will end by summer

The prime minister has said he cannot rule out the lockdown lasting into summer. His answer was not too easy to follow but he did point to data showing the “contagiousness” of the new variant and suggested the government will wait until the first four priority groups are vaccinated before making further decisions.

‘Too early to say’ if lockdown will end by summer, Boris Johnson says