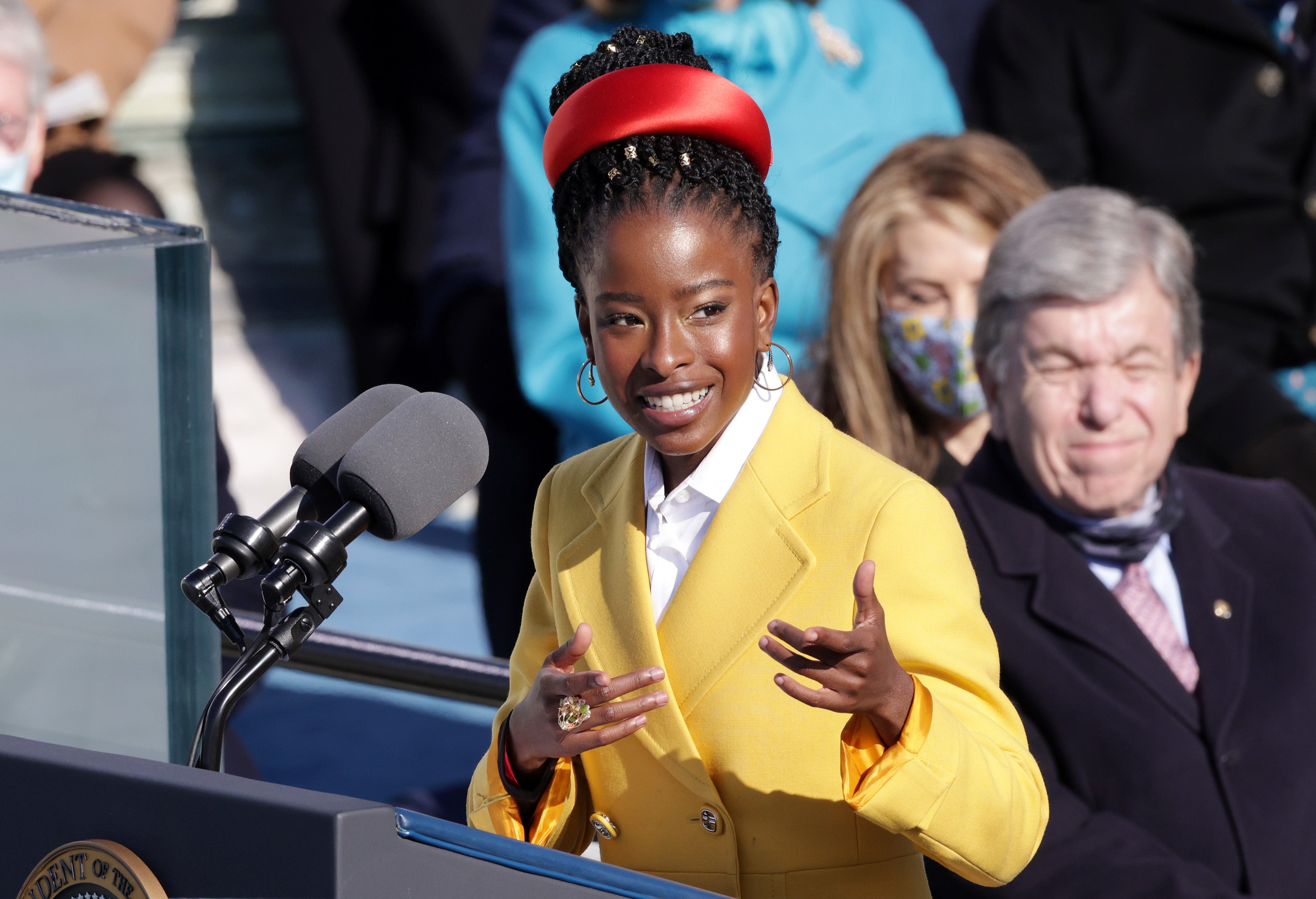 The youngest inaugural poet in US history said she was inspired by Martin Luther King Jr and Britain’s former prime minister, the late Winston Churchill, as she read “The Hill We Climb”.

Amanda Gorman followed in the footsteps of some of the greatest American wordsmiths, including writer and activist Maya Angelou, who delivered “On the pulse of the morning” for President Clinton in 1993, Richard Blanco who called for “One Today” in 2009 for President Obama, and Robert Frost, the first inaugural poet, who recited “The Gift Outright” at John F Kennedy’s 1961 ceremony.

Standing at the podium in a red headband and a coat in her signature shade of yellow, the 22-year-old from Los Angeles, California, described herself as a “a skinny black girl descended from slaves and raised by a single mother [who] can dream of becoming president, only to find herself reciting for one”.

Cameras cut to the newly sworn-in vice president, Kamala Harris, the first woman as well as the first Black or South Asian individual to hold the office, nodding from behind her mask.

With a graceful and confident delivery, Gorman touched on themes of violence, discord and a fall from democracy, before turning to hope.

She said: “We will not march back to what was, but move to what shall be. A country that is bruised but whole, benevolent but bold, fierce and free.

“Victory won’t lie in the blade but in all the bridges we’ve made.”

Gorman was born in LA in 1998 and was raised, along with her twin sister Gabrielle, by their teacher mother.

She fell in love with poetry at a young age despite suffering from a speech impediment, like President Joe Biden, and went on to study sociology at Harvard College.

In 2015 she published her first volume of poetry, The One for Whom Food is Not Enough, with themes focused on feminism, race and identity and the African diaspora.

Two years later, while still at college, she became the first National Youth Poet Laureate, a project in conjunction with the Library of Congress.

The same year she said she wants to run for president in 2036, when she’s 38-years-old.

Gorman had been charged by President Biden with composing a piece on unity and collective purpose, but later gave several interviews in which she described struggling to complete the work.

When, on January 6, a mob broke into the US Capitol, the poet told The New York Times that she was inspired to stay awake until midnight, adding lines about democracy and insurrection.

“We’ve seen a force that would shatter our nation rather than share it,

Would destroy our country if it meant delaying democracy.

And this effort very nearly succeeded.

But while democracy can be periodically delayed,

It can never be permanently defeated.”

Ms Gorman later told NPR that when it came to delivery she read up on work by former British Prime Minister Winston Churchill, as well as US orators and activists like Martin Luther King Junior and Frederick Douglass, who used “rhetoric for good”, not populism.

Her performance today was met with widespread acclaim.

As Ms Gorman received a hug from former First Lady Michelle Obama, tweets poured in including former presidential candidate Hillary Clinton who posted a photo of them together and said: “Wasn’t @TheAmandaGorman’s poem just stunning? She’s promised to run for president in 2036 and I for one can’t wait.

The latter of whom’s hit broadway show on founding father Alexander Hamilton was referenced in Gorman’s poem not once but twice.

Oprah Winfrey tweeted: “I have never been prouder to see another young woman rise! Brava Brava, @TheAmandaGorman! Maya Angelou is cheering – and so am I.”

Gorman thanked Winfrey in a reply and paid tribute “to the women whose footsteps I dance in”, revealing that “While reciting my poem, I wore a ring with a caged bird – a gift from @Oprah for the occasion , to symbolise Maya Angelou, a previous inaugural poet. Here’s to the women who have climbed my hills before.”

0 0 0 0
Previous : Reveal proposals for post-Brexit talks to parliament, say MPs, amid secrecy fears
Next : Covid infection levels may have risen at start of UK lockdown