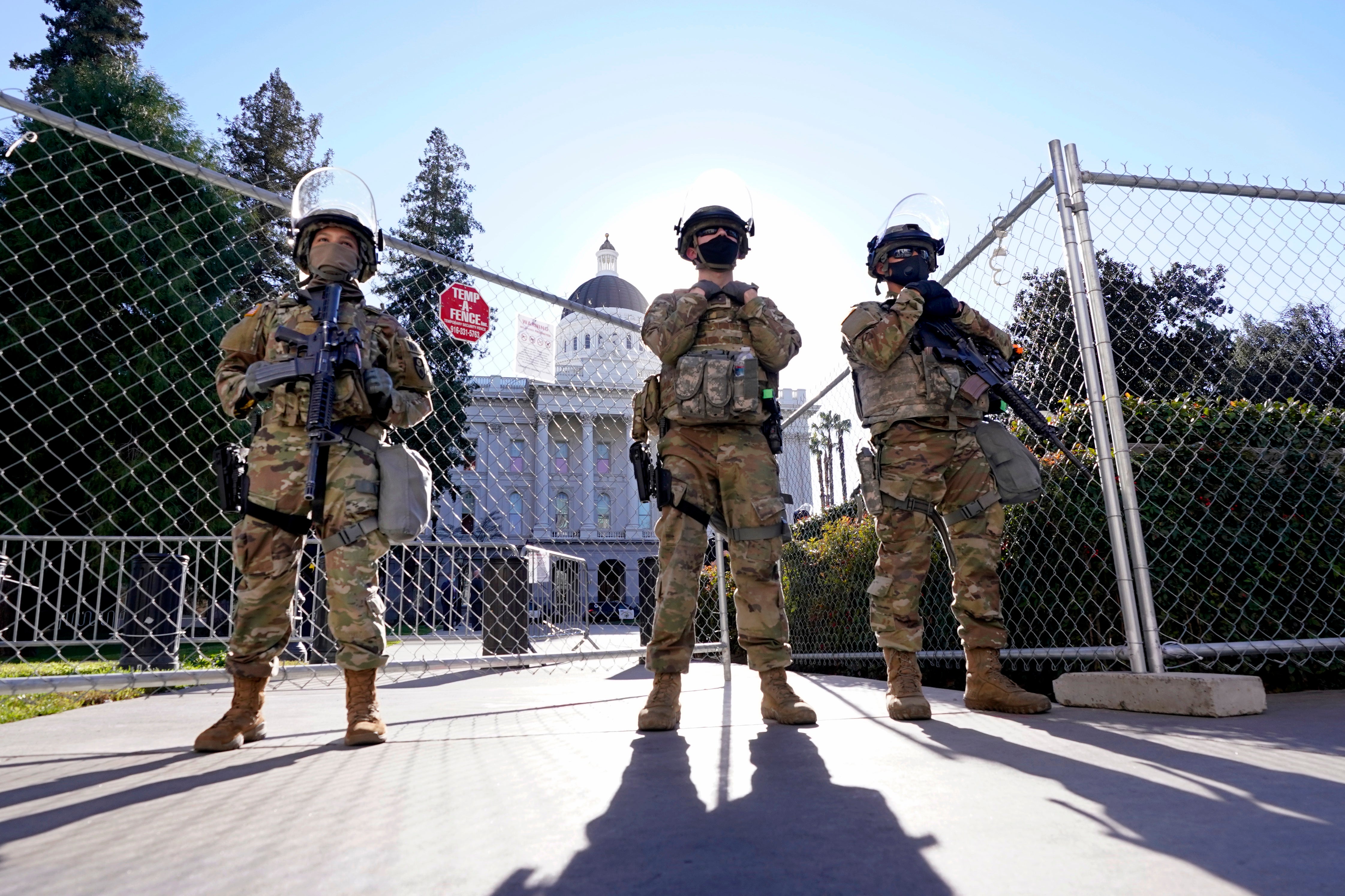 Normally quiet streets around U.S. state capitol buildings have looked more like battlegrounds recently, putting those who live and work there on edge and instilling a sense of foreboding

More than most people, these Americans will have front-row seats on whether the change of leadership Wednesday in the White House will lead to a lessening of tension that has been afflicting the nation. They’ll be watching what the next chapter brings from storefronts and the porches and stoops of their own homes.

Some expect Joe Biden to bring a unifying tone when he’s inaugurated as president on Wednesday, but say that alone won’t be enough to bring unity. How the people react will be key.

Jonathan Jones’ front-row seat to what happens next is his restaurant that is decorated with Black Lives Matter signs and art near the Oregon State Capitol. Epilogue Kitchen and Cocktails has been vandalized by a white supremacist. One day, police showed up as Jones and his friends were being accosted by neo-fascist Proud Boys. The police at first confronted Jones’ group as if they were the threat.

“There’s not a person who stood with me that day who didn’t think that they might die,” Jones said. “And the most awful part was not knowing if it was going to come from the police or from the Proud Boys.”

“I hope that he does not call for unity with neo-fascists, because there cannot be unity with people who want to see me dead,” Jones said.

In Washington state, a neighborhood next to the Capitol in Olympia boasts mid-century and 100-year-old homes. On normal days, the tranquil scene is one that Normal Rockwell could have depicted in idyllic portraits of American life, residents say.

“It’s a very charming, calm, nice place to walk a dog and chat with the neighbors on the porch,” one woman said.

But normal days are now a memory. In recent weeks, frequent protests involving people in tactical gear and armed with guns have created a climate of fear. People shout into megaphones, loud trucks drive down narrow streets, residents are called names or harassed, media helicopters and police planes fly overhead.

“There’s no retreat, because it’s your house, it’s where you live. It’s been a little jolting, and exhausting,” said the woman, who is so afraid for the safety of herself and her family that she spoke to a reporter only on condition she not be identified.

She said she is optimistic that Biden and Vice President-elect Kamala Harris will be able to accomplish many things.

“But I’m not sure that will change the real divisions we’ve all seen,” she said. ”People are behaving so differently, openly, that I don’t know — moving forward as a country — if we’ll be able to find each other again.”

Brian Henderson, minister of First Baptist Church of Denver that sits across an avenue from the shuttered Colorado Capitol, was so close to the upheavals of 2020 that he was struck in the left knee with a pepper ball. Henderson had been handing out water from the front steps of his small brick church as thousands battled police during riots over George Floyd’s killing.

“We’ve chosen to pivot through this whole pandemic, protests, this political season,” Henderson said Tuesday. “My hope is that this ability to pivot will only help us moving forward.”

Many neighboring businesses and state government buildings have boarded up their windows and doors in anticipation of possible violence but the church has not, to avoid giving the wrong message.

“We can’t let fear stop us from doing what we have to do,” Henderson said.

Henderson said he will watch the inauguration, “take a big deep breath and go, ‘Phew! We made it. A long four years.’”

Washington, D.C., itself is also vastly different, even from heightened security that accompanies presidential inaugurations.

A restaurant named We, the Pizza is located just one block from barricades surrounding the U.S. Capitol, where Biden takes his oath of office. The pizzeria has been feeding thousands of National Guard troops and other security and first responders, using donations from around the nation.

Manager Rob Earley said a girl around 6 years old brought in a check for $1,000 on Tuesday — money she had raised to feed the soldiers.

“I had tears in my eyes,” Earley said. “It’s good to see people that young that are wanting to be so involved in what’s going on and wanting to be part of making change.”

For his part, he believes Biden will set a new tone in his speech.

In Nashville, Tennessee, the police chief distributed a bulletin about a planned pro-Trump rally outside the state Capitol on Inauguration Day. Worry over possible violence was heightened by a Christmas Day bombing that killed the bomber and severely damaged buildings.

A few blocks away, the private Templeton Academy decided to be on the safe side, and hold classes virtually on Wednesday.

Head of School Kalee Barbis said teachers have been having conversations with students about the bombing and the deadly riot at the U.S. Capitol.

“Our kids are aware of what’s happening in the world, and they’re hungry for a space where they can have those conversations,” she said.

Back in Oregon, Jones has been buoyed by people coming out in support of his restaurant, as customers and guardians. On Sunday, Robert Fox, a glass-blowing artist, sat in his sedan parked in front of the restaurant, keeping watch before Jones and his wife, Maura Ryan, showed up to prepare meals, available only for takeout during coronavirus shutdowns.

“I’m just making sure nothing happens,” Fox said as a dozen gun-toting, far-right protesters stood outside the Capitol, three blocks away.

“I think that in spite of how loud the far right is, I think the bulk of the country is not that,” Jones said. “And I think that the more that we can embolden people to show that solidarity and be willing to stand up and stand next to everybody and present that unified front, then I think the quicker we’ll get to the end of this.”