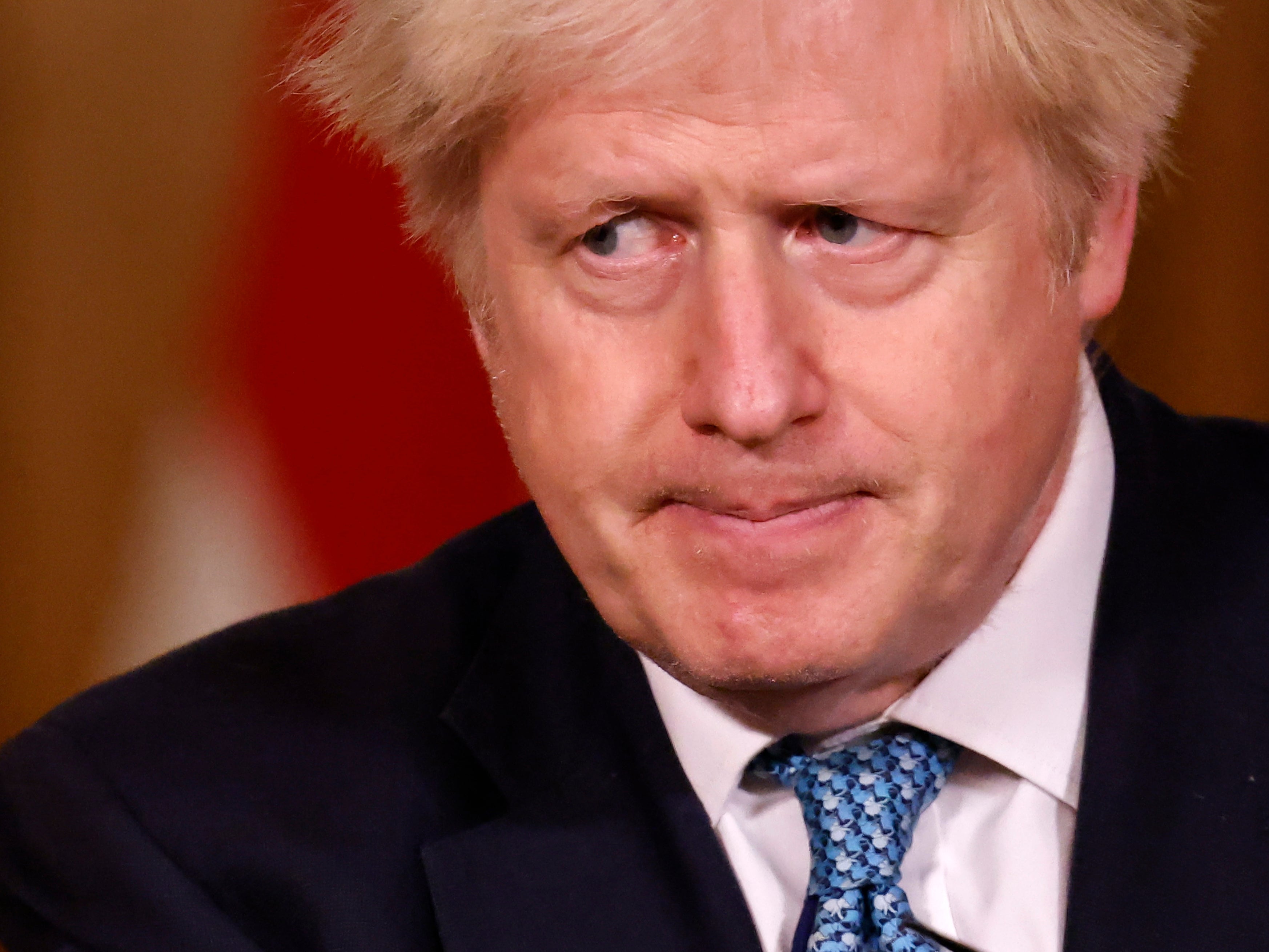 Boris Johnson’s government has been warned that meat worth hundreds of thousands of pounds is going to waste at EU ports, as British exporters continue to get caught up in post-Brexit red tape problems.

It comes as photos emerged showing UK’s largest fish market in Peterhead largely deserted, as the industry struggles with an export slump caused by customs delays. “What a sad sight – like a ghost town,” said the Scotland Food and Drink group.

Meanwhile, Northern Ireland secretary Brandon Lewis claimed that empty shelves in Northern Ireland were due to coronavirus “challenges” – and not because of Brexit. And the head of Eurostar has sounded alarm over the future of the rail company, saying the situation was “critical”.

The prime minister has narrowly avoided a Commons defeat as he suffered a significant Tory rebellion with MPs seeking to block trade deals the UK has made with countries rules to be committing genocide.

The amendment to the Trade Bill would have forced the government to withdraw from any free trade agreement negotiated with a state which the High Court has deemed guilty of genocide.

Bottle of Portuguese wine to nearly double in price for UK customers due to Brexit, says wine merchant

A bottle of Vidigal Porta 6, a best-selling wine to the UK market, sold by a Portuguese wine merchant is set to almost double in price from around £4.70, including all taxes and shipping fees, to between £7 and £8.

Portugal Vineyards explained the new rules and price changes for its products sold to the UK market, which includes excise duty and additional shipping costs due to exportation customs dispatch.

Shared by BBC’s Northern Ireland business editor John Campbell, the merchant states that its products are now shown without VAT in their store, but are subject to 20 per cent VAT tax upon arrival in the UK.

All alcoholic products are subject to excise duty. For wines up to 15 per cent alcohol volume, this amounts to £297.57 per hectolitre – equivalent to £2.23 per 750ml bottle and twice that for a magnum bottle.

Sparkling wines are subject to a different excise, which makes it £2.68 per 750ml bottle.

Shipping costs are the same in terms of transport costs, but each order has an additional fee of £9.79 for the exportation customs dispatch, said the company. Customers who order more than one case of 12 bottles would save money “since it’s a flat fee per order and not per case”.

“This information is very important because if a client refuses to pay the importation duties, the parcels will be returned to us and we will have to deduct the return costs to the value paid for the order,” said Portuguese Vineyard.

Boris Johnson is facing calls to compensate the UK’s meat industry, as tonnes of product is left rotting at European ports as a result of “eye-watering” Brexit paperwork, reports our Political Editor Andrew Woodcock.

It comes after the prime minister promised a £23m compensation fund to fish traders whose exports to the EU have been disrupted through no fault of their own.

Read more about the challenges thrown up by Brexit below:

The director of a haulage company, AOG Couriers, has said journey times for some of his drivers have trebled due to new paperwork brought on by Brexit.

Joe Johal said the additional paperwork, on top of Covid-19 tests and long queues, have caused huge delays on jobs, giving an example of a job that should have taken six hours which instead took over 22 hours to complete.

He told the BBC his company, which moves aircraft parts from warehouses in Crawley and Worthing to the continent, is “losing orders” as his clients “are sourcing components from elsewhere” amid the long delays.

“We have so much more paperwork to do now, and loads more processes,” he said.

“Before Brexit we would have got from Crawley to Paris in six hours. On Friday it took us 22 hours.”

Graham Pask from the Road Haulage Association said that a “seamless electronic process” they had hoped for was not happening, adding: “Some of the horror stories down at Ashford are that drivers are waiting out in the rain for two or three hours with paperwork trying to get it cleared.”

Northern Ireland businesses and hauliers have rejected a government minister’s claim that disruptions to supply chains since the New Year were down to Covid and not Brexit.

They warned that further difficulties were looming in three months’ time, with the Road Haulage Association Northern Ireland saying that the full extent of the problems caused by Brexit had in fact been “masked” by the coronavirus outbreak.

Fisherman in Northern Ireland have spoken of fears that they will lost out post-Brexit under a “discriminatory UK system, as the UK government is set to decide on fishing quotas in the coming weeks.

Alan McCulla, chief executive of the Anglo-North Irish Fish Producers Organisation, says that to potentially lose out to “placate” fleets in England, Scotland and Wales is “sickening”.

Mr McCulla gave evidence to the Stormont Agriculture Committee, saying that it appeared as though one discriminatory system is to be replaced by another.

“That’s the level we have got to, having replaced on EU system of discrimination to Northern Ireland fishermen, that we’re now going to replace it with a GB system that applies more discrimination,” he said.

The NI fishing industry fears that London will “seek to redistribute some of what should be Northern Ireland’s share of the additional fishing quotas gained from the EU”, he added.

“Today Northern Ireland’s fishermen hold about 8.4 per cent of all UK fishing opportunities,” he said.

He said about 20 per cent of Northern Ireland’s quota are fish and shellfish stocks in the Irish Sea, with 80 per cent in the west of Scotland, the North Sea and in the south west approaches.

“We suspect Defra’s aim is to allocate only a proportion of the UK’s gains in the Irish Sea to Northern Ireland’s fishermen,” he said.

“When Northern Ireland’s existing share is applied to the additional quota gained by the UK from the EU, it should mean that Northern Ireland gains new fishing opportunities in all sea areas worth £19.1 million per annum from 2026.

“Prawn is the most important local catch here in Northern Ireland (50 per cent), 30 per cent is pelagic species such as mackerel and herring, 20% are diverse white fish species.

“We believe Defra are manoeuvring to reallocate quota from Northern Ireland to England, Scotland and to a lesser extent Wales, to placate fishing interests there who are bitterly disappointed with the outcome of the fisheries element in the UK-EU Trade and Co-operation Agreement.”

Bank of France boss says almost 2,500 jobs have moved to France because of Brexit

Brexit has driven almost 2,500 jobs and “at least €170 billion in assets” to France, said the governor of the Bank of France today.

Francois Villeroy de Galhau told a press briefing: “In spite of the pandemic, almost 2,500 jobs have already been transferred and around 50 British entities have authorised the relocation of at least €170 billion in assets to France at the end of 2020.

“Other relocations are expected and should increase over the course of this year.”

The EU will still allow London clearinghouses to operate across the continent for 18 months, as the bloc does not have comparable institutions of its own, reports AFP.

But once the deadline expires, financial transactions in euros are in theory going to have to be settled within the EU.

Mr de Galhau said that “a true ‘financing union’ must allow us to better mobilise surplus savings in Europe, almost 220 billion euros, in favour of productive investments”, and urged that Brexit be used as an opportunity to create a functional “union of capital markets” in the EU.

MPs are trying to block Priti Patel’s pick to scrutinise her immigration policies, fearing he will fail to stand up to her or for Windrush victims.

David Neal, the nominee to be the Chief Inspector of Borders and Immigration, failed to demonstrate he was up to the job in vetting by the Commons Home Affairs Committee, it said in a scathing report.

Rob Merrick has the full story:

Problems exporting fish to continental Europe as a result of Brexit are a sign that “decisions have consequences”, Brussels has said.

The European Union’s ambassador to the UK Joao Vale de Almeida said he hoped the situation would improve once businesses and officials adapted to the new trading arrangements.

But he warned the consequences of leaving the single market and customs union meant that extra checks and paperwork were now an ongoing fact of life.

There is fury within the fishing industry about the problems they have experienced attempting to export their catch to the lucrative continental markets.

Automaker Stellantis, the merger between Peugeot and Fiat’s parent companies, has said it will likely decide whether to make fresh investment in Britain in the next few weeks.

Peugeot-maker PSA said in 2019 that it wanted to keep open its northern English Ellesmere Port plant by building the new Vauxhall/Opel Astra there, but that would depend on the outcome of Britain’s departure from the European Union.

On Christmas Eve, London and Brussels sealed a deal for tariffless trade, dependent on local content levels, which become stricter on greener vehicles this decade. Stellantis chief executive Carlos Tavares said the company would be able to comply.

“We are now deciding where we are going to put those investments and we do not forget… that we have a strong asset, which is a brand called Vauxhall,” he said today, adding: “Most probably we will be able to make a decision within a few weeks.”