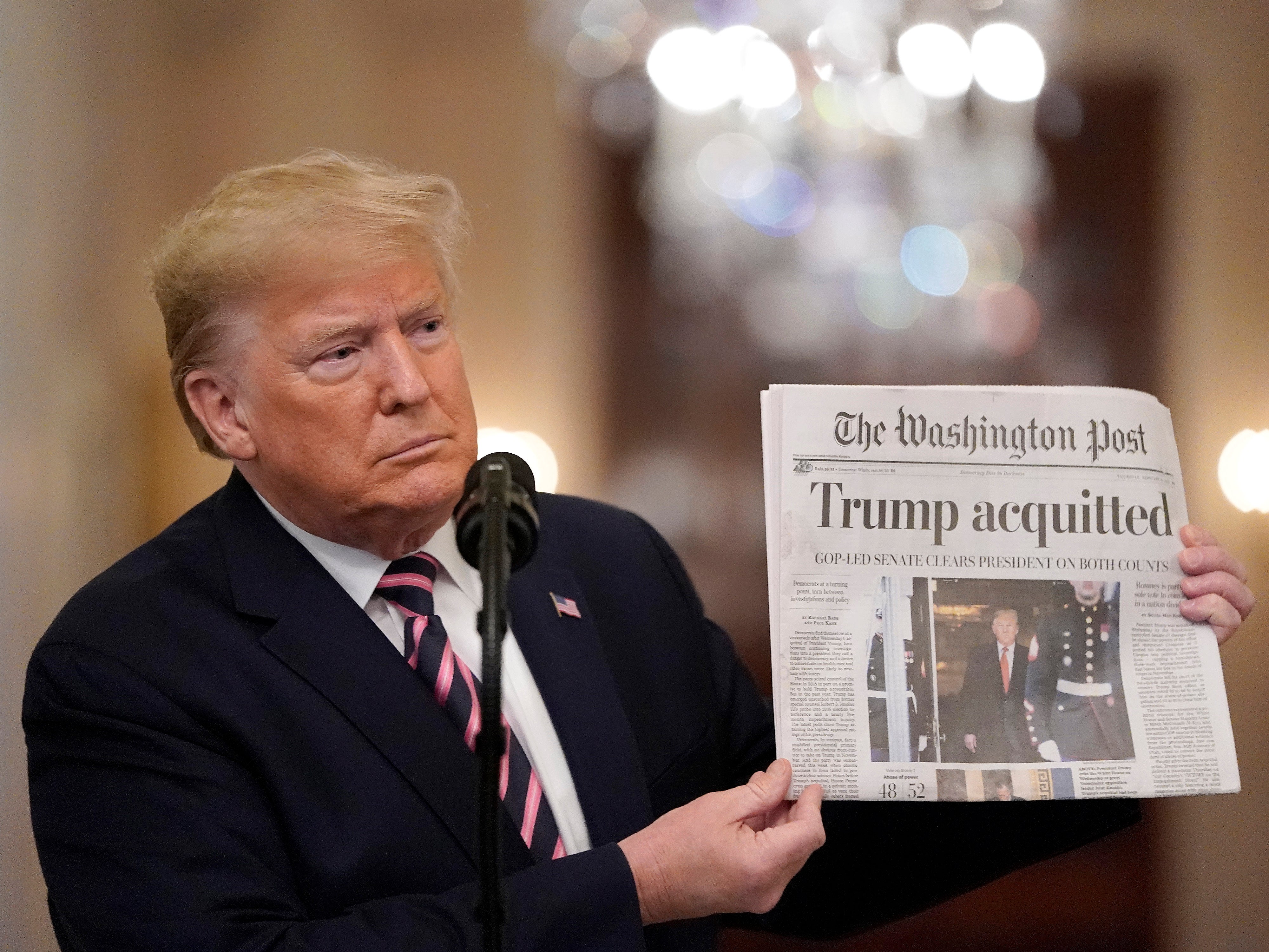 What is impeachment? | The Independent

Donald Trump will soon face a second impeachment trial in the United States Senate, having been found to have “incited insurrection” on 6 January, when the US Capitol was stormed by his supporters.

While no trial date has been announced, the Senate’s outgoing majority leader, Mitch McConnell said last Wednesday that a “fair or serious trial” could not conclude before Joe Biden is sworn in as US president, and Mr Trump’s successor, on 20 January.

On that basis, a trial is not expected to begin this week, although Senators are set to return to session on 19 January, and the process is expected to begin shortly afterwards, when House speaker Nancy Pelosi transmits the impeachment articles to the Senate.

It follows the House of Representatives voting on a single article of impeachment against Mr Trump last week, in an attempt to remove the president from office in his final days in office.

Instead, Mr Trump’s second impeachment trial will lead to his conviction – after leaving office – and possible barring from holding future office. Both require separate votes that will come at the end of the trial process, which is expected to take weeks.

The founders of the United States feared presidents might abuse their powers, so they included in the Constitution a process for removing one from office.

Under the Constitution, the president can be removed from office for “Treason, Bribery, or other High Crimes and Misdemeanours”.

Given the vague nature of the phrase, high crimes and misdemeanours have historically encompassed corruption and abuses of the public trust, as opposed to indictable violations of criminal statutes.

Former President Gerald Ford, while in Congress, famously said: “An impeachable offence is whatever a majority of the House of Representatives considers it to be at a given moment in history.”

No president has ever been removed as a direct result of impeachment.

The three presidents who were impeached by the House — Andrew Johnson, Bill Clinton, and Donald Trump — were not convicted by the Senate. It has only been a year since the Trump impeachment trial in the upper chamber of Congress.

Impeachment begins in the House, the lower chamber, which debates and votes on whether to bring charges against the president via approval of an impeachment resolution, or “articles of impeachment”, by a simple majority of the body’s members.

In the first Trump impeachment, the House Intelligence Committee conducted an investigation into whether Trump abused his power to pressure Ukraine to launch investigations that would benefit him politically. Weeks of closed-door testimony and televised hearings were held before a formal evidence report was issued.

Formal charges were then prepared based on the report and the full House impeachment vote was carried out. After approval, the action then moved to the Senate for trial, with House members acting as the prosecutors; the senators as jurors; and Chief Justice of the United States John Roberts presiding. As we know, ultimately the president was not removed from office.

Proceedings were expedited this time around, with the articles of impeachment introduced on Monday, with the vote taking place on Wednesday afternoon.

What happens in the Senate?

There is debate about whether the Constitution requires a Senate trial, but Senate rules in effect do require one.

In such a trial, House members act as prosecutors, witnesses will be called, and senators will vote on any punishment requiring a two-thirds majority vote.

If a trial were to proceed and a conviction to be handed down, Mr Trump would be removed from office with only days left of his presidency. He could also be barred from seeking elected office again and may lose various benefits afforded to former presidents should other votes be scheduled specific to those punishments — which require a simple majority vote.

While Senate Majority Leader Mitch McConnell allowed the previous impeachment trial to proceed, it was initially unclear what he might do this time around.

On Wednesday Mr McConnell rejected a bid to enact an emergency session of the Senate to conduct a full trial before the transition of power to the Biden administration, instead saying the legislative body would consider the House resolution at the next normal session on 19 January.

What about opening a trial and quickly ending it?

The Senate rules allow members to file, before the conclusion of the trial, motions to dismiss the charges against the president. If such a motion passes by a simple majority, the impeachment proceedings effectively end.

President Clinton’s Senate impeachment trial, which did not end in a conviction, lasted five weeks. Halfway through the proceedings, a Democratic senator introduced a motion to dismiss, which was voted down.

What’s the party breakdown in Congress?

Democrats control the House. The House comprises 433 members at present (there are two vacancies), 222 of whom are Democrats. As a result, the Democrats could impeach Mr Trump with no Republican support.

In 2020 the chamber voted largely along party lines to impeach the president. In 1998, the same was true when Republicans controlled the House and impeached Democrat President Clinton.

What confuses things slightly is the Georgia runoffs and when the two Democrat winners, Jon Ossoff and Raphael Warnock take their seats replacing Republicans David Perdue and Kelly Loeffler giving the chamber a 50:50 split, with the vice president casting a tie-breaking vote.

This depends on when Georgia certifies the results of the runoff elections – no earlier than 15 January and no later than 22 January – which, while giving the Democrats the majority, still leaves them far short of the two-thirds needed for a conviction.

Is there still time to remove Trump before the end of his term?

The chances of this are now extremely unlikely, given that the Senate will not be recalled for an emergency session.

On Tuesday, a separate resolution was passed calling on Vice President Mike Pence to convene the cabinet to discuss whether to invoke the 25th Amendment that would remove the president from office for not being able to carry out his duties. The vice president refused to consider the matter.

While there are no set timelines for an impeachment, even though it was pushed through the House in record time, any further action looks set to take place after Mr Trump has left office.

The president still has allies in the Senate and a two-thirds majority seems unlikely, but the move by the House is also symbolic and underlines that such actions will not go unpunished.

Mr McConnell, who will be relegated to minority leader later this month, has not publicly said whether he will convict Mr Trump, instead saying he would look at the legal arguments. He has privately told confidants he supports the House’s impeachment, The New York Times has reported, and is reportedly leaving it to individual members of the Senate GOP to vote with their consciences on whether to vote to convict.

Some experts also argue about whether an impeachment trial can be pursued after an individual has left office, there is precedent at lower ranks in the government, but that debate continues. Without the potential punishment of being removed from office, other sanctions may be introduced in the Senate.

Given the current climate in Washington, DC, anything seems possible.

What would have happened if Trump had been removed?

Had Mr Trump been removed from office or resigned ahead of 10 January, Vice President Mike Pence would become president for the remainder of Trump’s term – mere days – ending at midday on 20 January, 2021.

If that had happened, Mr Pence would hold the record for the shortest term in office ever by a US president, beating President William Henry Harrison who died on 4 April 1841, just 31 days into his term.

With additional reporting from Reuters