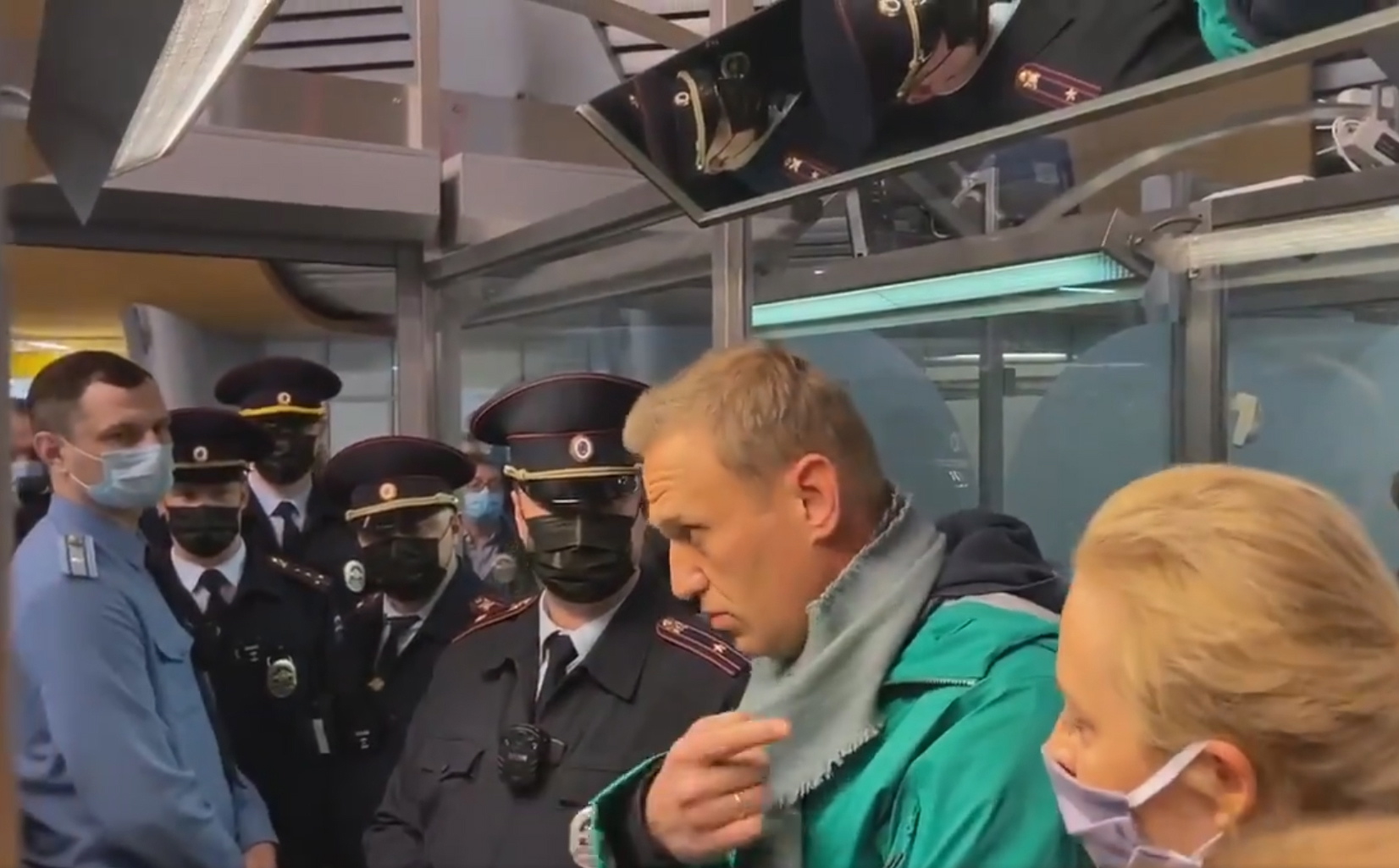 Russian opposition leader and Vladimir Putin critic Alexei Navalny has been detained by police after returning to Moscow, five months after a near-fatal nerve agent attack.

Footage showed Mr Navalny, 44, being met by police officers at passport control minutes after landing in the Russian capital.

A few moments before his arrest, Mr Navalny answered questions in front of a backdrop showing the red towers of the Kremlin and apologised to passengers for the inconvenience of the diverted flight.

“This is the best day of the last five months,” Mr Navalny said. “I’m not afraid, because I know I’m right. I’m not afraid of anything.”

Sunday was the first time he had gone back to Russia since his August poisoning.  When Mr Navalny was poisoned last August and collapsed on an internal flight in Siberia, he was flown to Germany for emergency medical treatment.

He had vowed to return despite the likelihood he would be arrested.

A statement from the state penitentiary service later confirmed Mr Navalny had been “detained pending a court hearing on January 29”.

It had promised to be a day of drama and the Kremlin decided they would do theatre.

Officials employed an elaborate ruse, redirecting his plane at the last minute and flatfooting journalists and supporters waiting in a different airport.

Earlier in the day, Moscow Vnukovo, the original destination airport, had been ostentatiously prepared for battle — complete with riot police, guard dogs, and concentric rings of metal shields. Only with the plane already descending did it become clear that something was not right.

First, the plane veered off course. Then social media connected with law enforcement said the plane was being diverted. Later, the airline and airport representatives confirmed the plane was heading north to the main city airport, Sheremetyevo.

Mr Navalny’s risky move to fly following his near-death experience had been variously likened to the arrival of Vladimir Lenin at Petrograd station before the October revolution in 1917 or to the struggle of Nelson Mandela in apartheid era South Africa.

Even more excitable opinions talked of the second coming of Jesus Christ — an interpretation not wholly inconsistent with the politician’s calls to devoted supporters to greet him at the airport.

In the end, the opposition leader was welcomed into Russia by another old friend: law enforcement.

That outcome was always the most likely. On 12 January, the state penitentiary service announced it had placed the Kremlin foe on a wanted list after supposedly breaking parole, and would look to arrest him on arrival. Another state agency, the investigative committee, made a parallel claim to Mr Navalny’s freedom, alleging he was guilty of embezzlement from funds donated to his anti-corruption foundation.

The legal justifications push the bounds of credibility. But Mr Navalny’s own lawyers concede either one of the claims could result in a lengthy prison sentence from Russia’s infamous court system.

As such, the immediate future for the opposition politician looks reasonably bleak. Supporters insist that even in the now likely event that he is imprisoned, he will be able to plot a new future from his cell in the same way as Nelson Mandela.

Yet, as one local commentator dryly noted, it took the anti-apartheid campaigner over two decades to regain his freedom.

Mr Navalny’s arrest raises tensions in Russia as it approaches national parliament elections this year, in which his organisation is expected to be active in trying to defeat pro-Kremlin candidates. He decided to leave Berlin of his own free will and was under no apparent pressure to leave from Germany.

“This is a real act of bravery for Alexei Navalny to return to Russia, given that government agents already tried to kill him once,” Human Rights Watch executive director Kenneth Roth tweeted. “But he understandably wants to be part of the pro-democracy movement in Russia, not a dissident in exile.”

“Mr Navalny should be immediately released, and the perpetrators of the outrageous attack on his life must be held accountable,” Jake Sullivan said in a tweet.

Mr Putin’s spokesperson, Dmitry Peskov, responded to a question about the arrest by saying “Was he arrested in Germany? I’m not up to date,” according to the online news site Podyom. Mr Peskov, like the Russian president, is noted for avoiding saying Mr Navalny’s name.