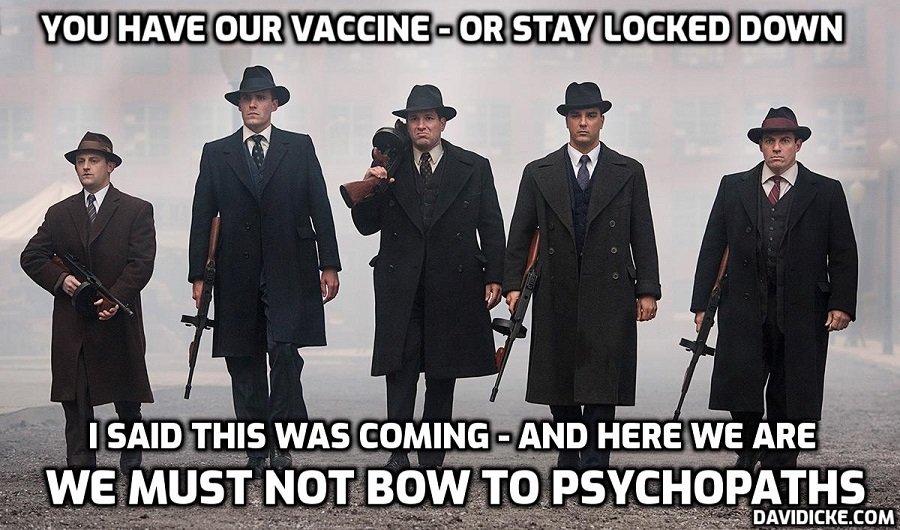 Anyone without a fake ‘vaccine’ that isn’t a ‘vaccine’ could be BANNED from pubs, restaurants and even workplaces under radical new fascist plan that has been the goal from day one. How long are you going to take this shit from moronic people doing the bidding of psychopaths?? You take it – they’ll go on giving it

Those who refuse to be immunised against COVID-19 could be banned from pubs, restaurants or their workplaces under a radical plan proposed by Gladys Berejiklian.

The New South Wales Premier has revealed she is considering implementing regulations that would prohibited residents who have not vaccinated from entering certain venues.

She said the measures would be aimed at ‘incentivising’ uptake of the vaccine, which is vital to rebooting the economy, and businesses may require patrons to prove they had received the jab.

The government has supply agreements in place for the, AstraZeneca, Pfizer, and Novavax vaccines and will start rolling out the Pfizer jab next month.

While vaccine rollout and policies are the domain of the federal government, Ms Berejiklian said she will be encouraging residents across the state to be immunised.

The government will meet in coming weeks for further discussions on how to roll out the vaccine.

Read more: Anyone without a vaccine could be BANNED from pubs, restaurants and even workplaces under radical new plan

0 0 0 0
Previous : Peer-Reviewed Study ‘Did Not Find Evidence’ Lockdowns Were Effective In Stopping ‘Covid’ Spread – it’s very difficult for lockdowns to stop the spread of something that doesn’t exist except through the illusion of manipulated figures and if you want it to disappear then stop getting tested with a test not testing for the ‘virus’ because you can’t test for something that doesn’t exist and with the PCR test even if it did
Next : Deeply sinister and stupid AOC proposes funding to ‘deprogram’ ‘white supremacists’ and ‘conspiracy theorists’ (anyone who can see the government is lying to them and wants to say so). It’s fascism, of course, but she’s not bright enough to see that – she’s too busy calling everyone else a fascist while promoting the very conspiracy she denies exists