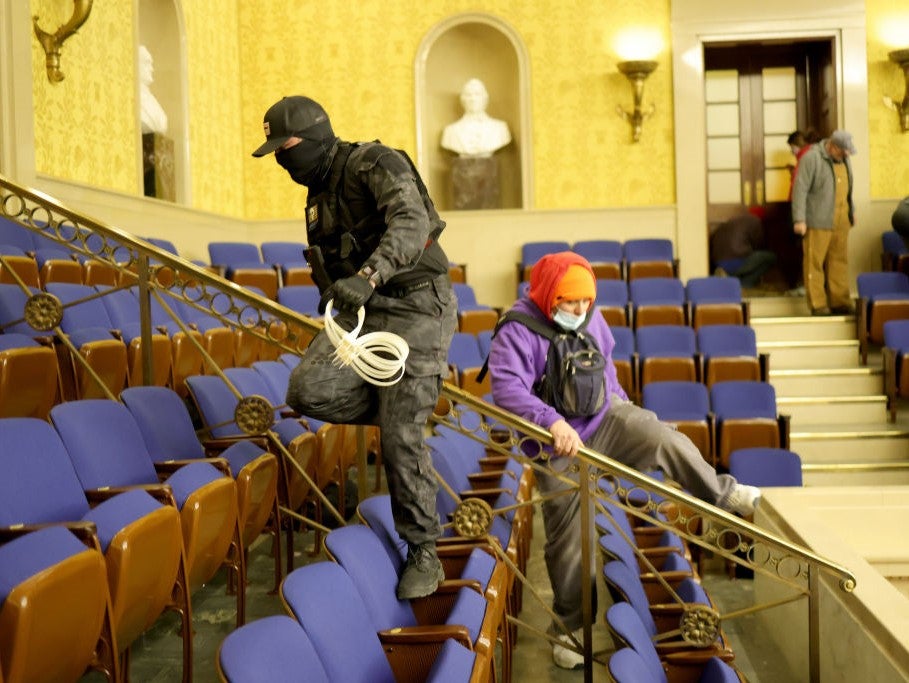 A mother and son duo pictured together during the Capitol riot on 6 January have been charged with conspiracy.

Lisa Eisenhart and her son Eric Muchel are charged with “knowingly and willfully conspiring with persons known and unknown” to “obstruct or impede” law enforcement officers, according to a legal filing.

The US Attorney’s Office for the Middle District of Tennessee said on Twitter that Ms Eisenhart, who works as a nurse, was taken into custody in Nashville on Saturday.

The filing, with the US District Court for the District of Columbia, says that video footage from inside the Capitol allegedly shows Ms Eisenhart and Mr Munchel “in the vicinity of a mob of individuals that are physically attacking two Capitol Police officers guarding entry into the Senate chamber”.

The pair appear to join the mob and chase the officers. Both are seen holding zip-ties.

After the officers managed to escape to a lower floor of the building, Ms Eisenhart appeared to shout at them over a bannister. The mother and son duo were then seen heading into the Senate chamber.

Mr Munchel told The Times of London that he and his mother both wore bulletproof vests and entered the Capitol together.

He also admitted to bringing a taser that he said was confiscated by the police during the riots.

“We wanted to show that we’re willing to rise up, band together and fight if necessary. Same as our forefathers, who established this country in 1776. It was a kind of flexing of muscles,” Mr Munchel told the newspaper.

Details have now started to reveal the true scale of the violence that was planned for 6 January when a joint session of the Congress met to certify Joe Biden’s victory in the US presidential elections.

Ms Eisenhart, who said she drove with her son from Tennessee, was quoted as saying: “The left has everything: the media, organisations, the government. We have to organise if we’re going to fight back and be heard.”

She also said: “I’d rather die as a 57-year-old woman than live under oppression.”

Mr Munchel said his intention was not to fight with the police, but “to show them that we can, and we will.”

0 0 0 0
Previous : Covid vaccinations to begin for over-70s and extremely vulnerable
Next : Insolvencies are set to rise sharply – by how much is for Sunak to decide