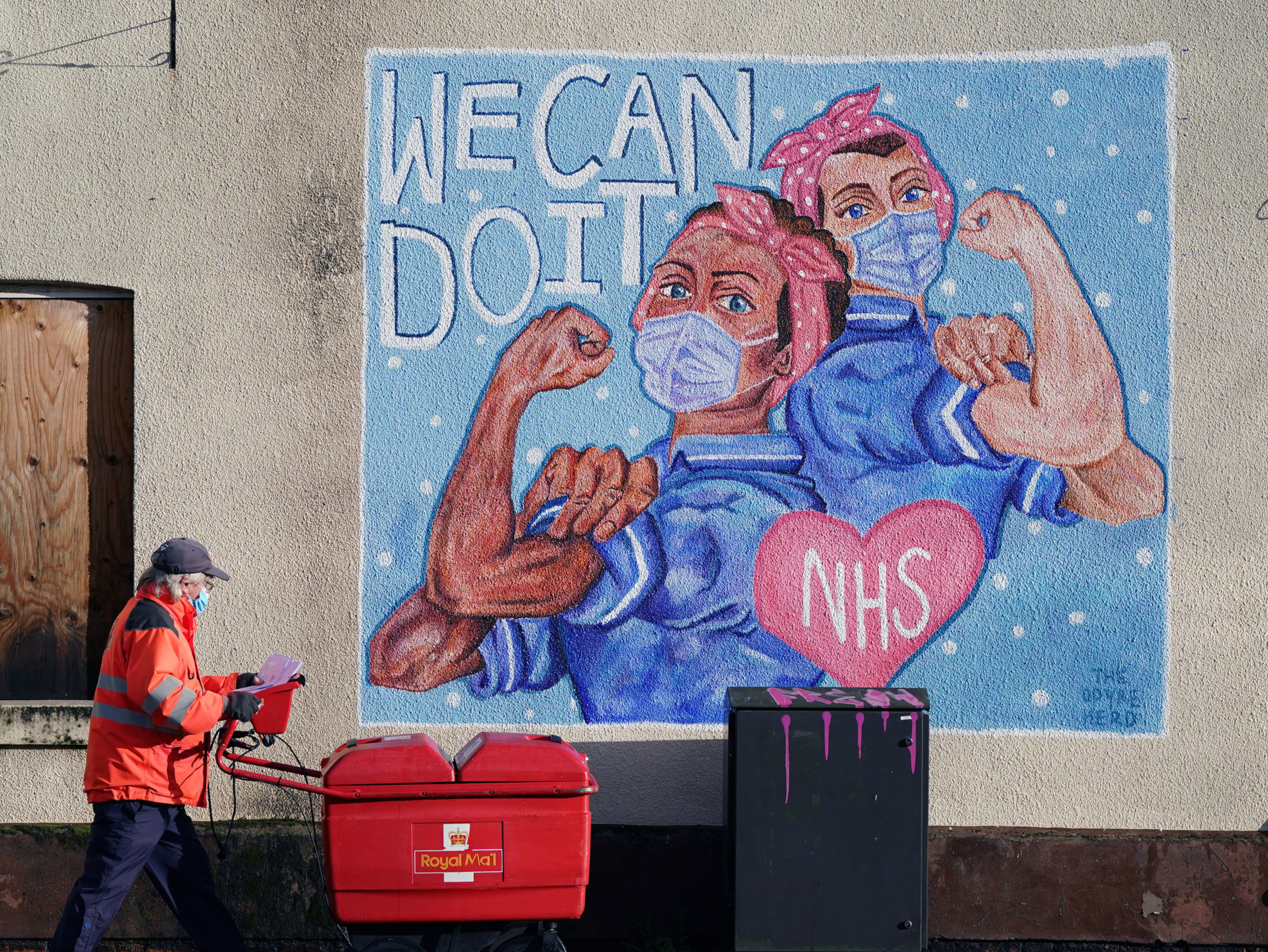 Dominic Raab says aim is to vaccinate all adults by September

The government hopes to offer a coronavirus vaccine to the UK’s entire adult population by September, the foreign secretary, Dominic Raab has said.

However, Mr Raab repeatedly refused to guarantee all people who have received the first dose would get a second jab within 12 weeks, telling Sky News’ Sophy Ridge on Sunday the government was “quietly confident” supplies would be sufficient.

Meanwhile, ministers are urging the public to “play their part” as the government is on track to reach its target of vaccinating two million people a week against coronavirus after more than 324,000 doses were administered in the space of 24 hours.

More than 3.5 million people in the UK having now received their first dose of the vaccine, Boris Johnson said, as he celebrated those helping the “fantastic national effort”. He added: “Help our NHS by staying at home to save lives.”

It comes as Matt Hancock, the health secretary, said people should also sign up to clinical trials for vaccines and treatments, and stay informed with accurate and trusted NHS advice.

He urged the public to commit to “three pledges” to support the rollout, saying: “Everyone has a part to play in this national effort – to protect our NHS, our loved ones and other people’s loved ones too.”

Staff who have worked long shifts caring for residents throughout the pandemic tell Ben Chapman why they are striking to secure a fairer deal.

Three out of four ambulance staff are at “breaking point”, suffering low morale and calling for better protective equipment, a new study suggests.

The GMB union said almost two out of three of 2,000 of its members surveyed said they believed their PPE should be upgraded.

Three out of four respondents said ambulance workers were at “breaking point”, with the crisis much worse than when the lockdown first started last March.

Jonathan Reynolds added that a system whereby workers can report employers who are forcing them into work during the pandemic when they can effectively work from home should be considered.

Asked if there needs to be a helpline or email where workers who are being pressured into work can report their bosses, the shadow work and pensions secretary told Times Radio: “Yes. I mean the first thing to say is that people should join a trade union, everyone should have independent workplace representation.

“Any person, whatever your job is, will benefit from having that.

“But, yes, I do think a way of people being able to raise – not just for their own safety, though clearly that should be paramount – it is also about getting those infection rates down, protecting the NHS.”

It would be “daft” for the government to cut unemployment support during a recession, the shadow work and pensions secretary has said.

Asked whether he expects any Conservative MPs to vote alongside Labour over plans to cut the £20 Universal Credit uplift, Jonathan Reynolds told Times Radio: “Yes, I think some are certainly considering that. However they vote, I think a lot of Conservative colleagues do agree with us.

“I mean, look, governments do not cut unemployment support in recessions – you’ve got to go back to the Great Depression to find an example of a government in the UK daft enough to do that – and there are good reasons for that.

“£1,000 a year for a low-income family, that is like your gas, your electric, your broadband bill for the year all rolled in together. So, it will have a real impact on people, but, as I say, it is also the wrong choice for the economy.”

Mr Reynolds added “there is no credibility” to the argument that MPs should not be taking a view on the matter, adding: “People expect their MPs to make a decision on this.”

Lockdown to be eased gradually around spring or summer, NHS England executive says

He said: “It is not going to be the case that on Valentine’s Day, with one bound, we are free.

“Equally, I don’t think we will have to wait until the autumn, I think somewhere between those two.

“Subject, of course, to this uncertainty around new variants of coronavirus and it will be very important we don’t see those taking off in a way that undermines the effectiveness of the vaccines we have.”

Sir Ed Davey has said that Gavin Williamson is “the worst education secretary we’ve had in living memory”.

Asked whether university students should be financially recompensed for the disruption of their education during the pandemic and who should pay for it, the Lib Dem leader said: “I think it should be the government.

“I think the government has really let down universities, it has let down schools, frankly. I mean the fiasco from Gavin Williamson, the way he has mismanaged this whole crisis for our children and young people and students.

“That is why I have called for him to resign. I think he is the worst education secretary we’ve had in living memory.”

NHS England vaccinating at rate of ‘140 jabs a minute’

Sir Simon Stevens said the NHS in England is vaccinating at a rate of “140 jabs a minute”.

The NHS England chief executive said: “We will start testing 24/7 in some hospitals over the course of the next 10 days.

“But we are at the moment vaccinating at about 140 jabs a minute and yesterday [Saturday], a quarter of a million people got their vaccinations on the NHS.

“I’m pretty confident by the time we get to the end of today, Sunday night, we will have perhaps done 1.5 million vaccinations this past week, that’s up from around a million the week before.”

Patient admitted to hospital with coronavirus ‘every 30 seconds’

Someone is being admitted to hospital with coronavirus “every 30 seconds”, NHS England chief executive Sir Simon Stevens has said.

“Since Christmas Day we’ve seen another 15,000 increase in the in-patients in hospitals across England, that’s the equivalent of filling 30 hospitals full of coronavirus patients.

“Staggeringly, every thirty seconds across England another patient is being admitted to hospital with coronavirus.”

Reported government plans to replace a £20-a-week benefit uplift with a £500 one-off payment would be a “terrible policy”, the shadow work and pensions secretary has said.

Jonathan Reynolds told Sky’s Ridge on Sunday: “First of all, if you go ahead with this cut you are reducing out-of-work support, unemployment benefits to their lowest real-terms level since 1992 at a time when unemployment is about to peak.

“The reason that a one-off payment is a bad policy is because whilst we’re talking about six million families being affected, those families will change throughout the year – some will go back into work, some will come out – we’ve had at times in the pandemic 200,000 new claimants coming onto the system in a single month.

“So, a one-off payment, a snap shot, completely fails to support those people.

“There is simply no reason that this cut should take place in April.”

Asked whether a Conservative rebellion could be expected on the matter on Monday, Mr Reynolds replied: “I can’t predict what Conservative colleagues will do, but, yes, people have been in touch – there has been some productive conversations.”

Coronavirus restrictions will not disappear in one “big bang” but England could instead return to a tiered system, Mr Raab has said.

He told BBC One’s The Andrew Marr Show: “The aim is by the middle of February to have 88 per cent of those most at risk of dying of coronavirus with their first jab, and by the early spring to have 99 per cent – so that is the milestone if you like.

“I think it is true to say that when we get to a situation in the early spring, perhaps March, if we succeed in hitting those targets – we have made good process so far – we can start to think about the phased transition out of the national lockdown.

“I think it is fair to say it won’t be a big bang, if you like, it will be done phased, possibly back through the tiered approach that we had before.”

0 0 0 0
Previous : Senior executive is paid £330,000 a year to monitor whether the Corporation is impartial when anyone with a brain cell knows that it is systematically advancing a blatant agenda through lies and omission. They are laughing at us – David Icke
Next : ANTIFA Militant Arrested For Plotting To MURDER Trump Supporters During Inauguration, Says He “Received Soros Money” – David Icke