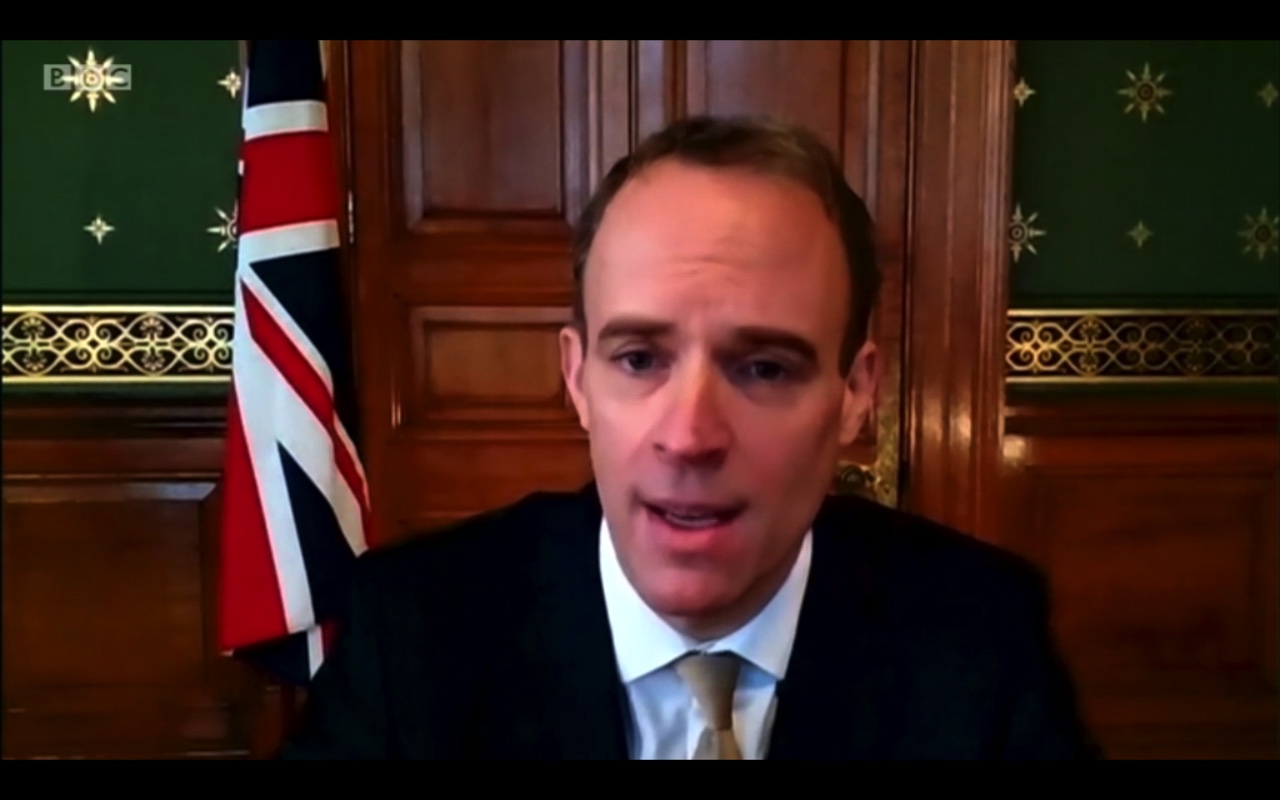 The government has secured a “great deal” for the fishing industry in its post-Brexit trade agreement, Dominic Raab has insisted, rejecting the charge that ministers had “comprehensively betrayed” the industry amid an outpouring of anger and concern for its future.

Faced with warnings that the Scottish fishing industry is “drowning under red tape” and that generations-old firms could collapse in a matter of days, the foreign secretary claimed he was “not convinced” that the chaos was a result of Brexit.

It came as Sir Keir Starmer told The Independent that bereaved families “deserve to know” when an independent inquiry into the government’s handling of the coronavirus pandemic will begin, with the UK’s death toll nearing 90,000. Meanwhile, ministers are to propose new laws to protect colonial-era monuments, following the toppling of slave trader Edward Colston’s statue in Bristol.

With Dominic Raab pledging to “beef up” checks on whether new UK arrivals are self-isolating, a leading epidemiologist criticised the government’s “pretty lax” approach so far to quarantining foreign arrivals and contacts of coronavirus cases.

Amid reports that ministers are considering introducing quarantine hotels, which Mr Raab did not deny, Professor John Edmunds said that if there is a quarantine policy it should be made “as effective as you possibly can”.

“If you’re going to have quarantine then you should probably make it as effective as you possibly can,” the Sage member told Times Radio.

“Ours has been rather lax, not just for visitors coming into the UK the vast majority of whom do not have covid but we’ve also been rather lax with our quarantine of individuals who have been in direct contact with a case; indigenous cases. We’ve been pretty lax about that.

“We just ask them to stay at home and so I think yes, if we’re going to have quarantine we should try and make it work as best as possible.”

Priti Patel should take responsibility for an error that has led to hundreds of thousands of police records being deleted from UK-wide databases, the shadow home secretary has said.

Asked by a member of the public whether the home secretary should resign over the matter, Nick Thomas-Symonds told the Fabian Society conference audience: “A cabinet minister who actually took responsibility for their own department would be a novelty in this government, I am sad to say.

He added: “Far from having a home secretary that takes responsibility, the home secretary hasn’t even appeared in public since this crisis broke on Thursday night – indeed we had to learn about it from the newspapers rather than learn from it actually from her and what she was going to do about it.

“Ministers in this government, I am afraid, just don’t take responsibility. There is a culture of not taking responsibility and it is corrosive, frankly, to the quality of governance right across the Cabinet.”

Asked about the decision of barrister David Perry QC to act on behalf of authorities against nine activists facing seven-year jail sentences for unlawful assembly, Mr Raab said he could not understand how anyone could “in good conscience” take on such a case.

Mr Raab also said it was “disgraceful” for the Chinese Embassy in the US to say that the Beijing government’s activities in Xinjiang province were “eradicating extremism” and ensuring Uighur women would no longer be treated as “baby-making machines”.

Nazanin Zaghari-Ratcliffe’s family has said she could be free to leave Iran on 7 March, when her sentence is due to expire, my colleague Tom Batchelor reports.

The British-Iranian woman has been under house arrest in Tehran since being moved from jail last spring. Her husband, Richard Ratcliffe, has written to the foreign office asking for details about the end of her sentence, including what arrangements have been made for her to be given the correct papers to travel and how an ankle tag she wears will be removed, The Sunday Times reported.

Someone is currently admitted to hospital with coronavirus “every 30 seconds” in England, Sir Simon Stevens has said, however some 140 inoculations are being given out every minute.

The NHS England chief executive told Andrew Marr: “Since Christmas Day we’ve seen another 15,000 increase in the inpatients in hospitals across England, that’s the equivalent of filling 30 hospitals full of coronavirus patients.”

While hospitals now have 75 per cent more Covid patients than during the first peak, sir Simon said jabs are being administered “four times faster” than people are newly catching the virus.

Here’s the footage of the foreign secretary’s response to the chaos in the fishing industry. Dominic Raab said he is “not convinced” that firms are facing collapse as a result of the government’s Brexit deal.

Our political editor Andrew Woodcock has the full report here:

Ahead of a vote tomorrow on whether UK courts should be able to declare foreign nations guilty of genocide, Dominic Raab told the BBC: “As the son of a refugee from the Holocaust, I couldn’t be more moved and support the spirit of what is being proposed.”

“That’s why we took measures this week on Xinjiang and to prevent UK businesses supporting or benefitting from or feeding into the supply chains in Xinjiang and the awful reports we’ve got of forced labour – slave labour effectively, forced sterilisation, appalling human rights abuses.

“Whether or not it amounts to genocide has to be determined by a court, and of course the bar is being set incredibly high – frankly, we shouldn’t be engaged in free trade negotiations with countries abusing human rights well below the level of genocide.

“I think there is an issue, a challenge of practical, workable questions of whether the High Court in this country, as opposed to a criminal court, has the investigative capacity to actually determine facts on the ground.

“And I think there’s a second issue, which is really in relation to what we now know what’s going on in Xinjiang. The question is whether in relation to any country that engages in those human rights abuses, you engage in free trade negotiations.

He added: “We shouldn’t really be delegating the political question over who you engage in free trade negotiations to the courts. That’s something that MPs should hold the government to account about, and we absolutely embrace that.”

The government plans on introducing new legal protections for statues linked to colonialism and racism, my colleague Zoe Tidman reports.

Writing in the The Sunday Telegraph, Robert Jenrick said decisions to take down heritage assets in England will need both planning permission and a consultation with local communities to go ahead

The communities secretary denounced recent attempts to “erase” pieces of “our national story”, which he said had been “done at the hand of the flash mob, or by the decree of a ‘cultural committee’ of town hall militants and woke worthies”.

Our business correspondent Ben Chapman has more on the outcry from the fishing industry over Boris Johnson’s “desperately poor” Brexit deal, which Dominic Raab insisted is “great” for fishermen.

With losses mounting by the day and many businesses fearing for their survival, the industry’s trade body has written a scathing letter to the prime minister.

Scottish Fishermen’s Federation chief executive Elspeth Macdonald accused Mr Johnson of misleading the public about the agreement and giving the industry “the worst of both worlds”, writing: “You and your government have spun a line about a 25 per cent uplift in quota for the UK, but you know this is not true, and your deal does not deliver that.”

Charged with “comprehensively betraying” the Scottish fishing industry by the BBC’s Andrew Marr, Dominic Raab said: “I don’t accept that.

“I think this is a great deal for the fishing industry, both short-term and long-term. We get control over our fisheries back, full control as an independent coastal state. There’s an immediate 15 per cent uplift in terms of our access to fisheries for the UK sector in the first year. That rises to two thirds in the five-year transition period, then we have annual negotiations.

“And of course, the fishing industry is going to want to increase its capacity to take advantage of those increased stocks, and that’s why we’re putting in £100m to shore up, to strengthen the fishing industry right across the whole of the UK to make sure that this really important opportunity of leaving the EU can be properly grasped.”

And pressured on the fact that the Scottish fishing industry is “drowning under red tape”, with generations-old firms facing collapse in a matter of days as a result of the deal, Mr Raab said: “I’m not convinced that that’s the result of the agreement.

“The agreement we have struck … will create huge sustainable opportunities. Of course we’ve always said as we leave the transition period and with a deal, and even more if we haven’t had a deal, there will be some teething problems.”

0 0 0 0
Previous : Coronavirus: No-one should be going on holiday while NHS is ‘on the cusp’, says Dominic Raab
Next : MHRA approval not needed for key part of schools testing plan, government says