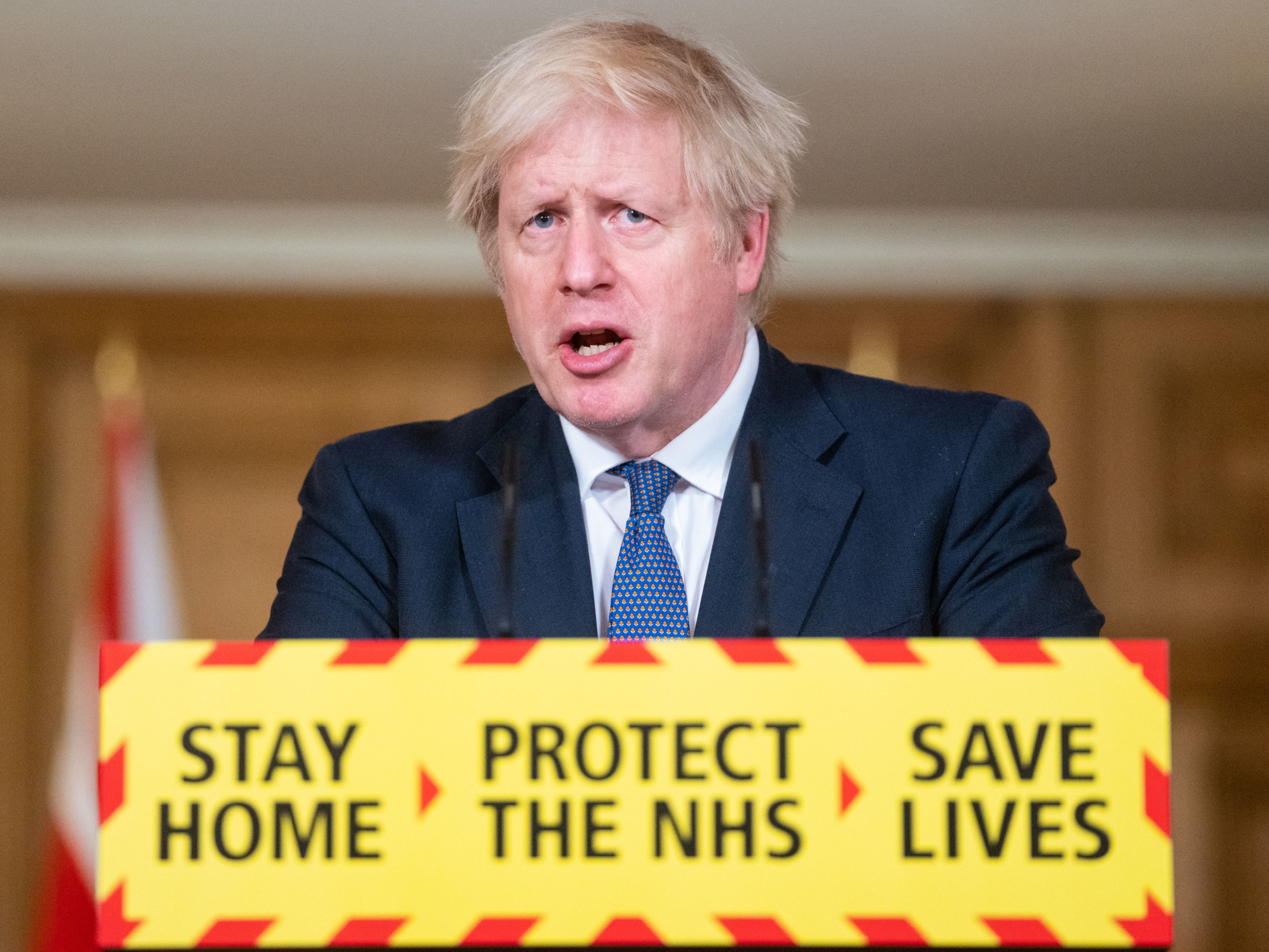 Tougher coronavirus restrictions have come into force in Scotland, with everyone on the mainland told not to leave or remain outside their home except for essential purposes.

Entering businesses to purchase takeaway food and drinks has also been stopped, with premises required to operate using a hatch or counter at the door. Drinking alcohol in public outdoors has also been banned, along with non-essential click-and-collect services.

It comes as Professor John Edmunds, a leading epidemiologist, warned relaxing restrictions at the end of next month would be a “disaster” and put “enormous pressure” on the NHS.

Meanwhile, quarantine-free travel to the UK will end on Monday in an attempt to keep new coronavirus strains out of the country, Boris Johnson has announced.

The prime minister said anyone flying into the country from overseas will have to show proof of a negative Covid test before setting up. The government has also banned flights from South America, Portugal and Cape Verde over the emergence of a new variant in Brazil.

Virulent Brazilian variant likely to be in the UK, scientist warns

The new Brazilian strain of coronavirus is likely to have already entered the UK, before the government’s imposition of travel restrictions on the South American country, a leading epidemiologist has warned.

Professor John Edmunds, a member of the Government’s Scientific Advisory Group for Emergencies (Sage), said he would find it “unusual” if the variant, which has raised concerns around the world because of its increased virulence, was not in the UK.

Salisbury Cathedral has been transferred into a vaccine hub this weekend, with those receiving the Covid-19 inoculation able to enjoy live classical music as the backdrop to their jab, Bethany Dawson reports.

Starmer suggests he will back further coronavirus measures

Labour leader Sir Keir Starmer suggested he would back further coronavirus measures, as he said “the tougher the restrictions now the quicker we get the virus back under control”.

Sir Keir, answering questions following a speech to the Fabian Society’s new year conference, said he was “still worried” by the number of infections despite signs they are falling.

He said the “sense that we are through the worst” of the third wave is wrong, as he welcomed further restrictions on travel announced by the government on Friday.

He added: “(The NHS) is really under strain at the moment and we need to do whatever we can to reduce that strain, particularly in the next few weeks, which are going to be critical.”

India has started vaccinating health workers in what is likely to be the world’s largest Covid-19 vaccination campaign.

The country is home to the world’s largest vaccine makers and has one of the biggest immunisation programmes, with authorities hoping to give jabs to 300 million people.

The recipients include 30 million doctors, nurses and other front line workers, followed by 270 million others who are either aged over 50 or have illnesses that make them vulnerable to Covid-19.

China has built a 1,500-room hospital for Covid-19 patients in response to a surge in infections.

The hospital is one of six with a total of 6,500 rooms being built in Nangong, south of Beijing in Hebei province, the official Xinhua News Agency said.

Government criticised over ‘incomplete’ attempt to get laptops to students, amid frustrations over device quality and delays

The government has faced criticism over an “incomplete” attempt to get laptops to students needing them at home, as school leaders raise concerns over the quality of laptops and waiting times for them, Zoe Tidman reports.

One headteacher told The Independent he had not been allowed to order a single laptop for his school since England’s new lockdown, with the online system telling him he would be able to “as soon as possible”.

Covid testing before travel to UK: Key questions and answers

The Independent‘s guide to “test before travel” has been updated to reflect the ending of travel corridors. The measures apply to anyone arriving in the UK after 4am on Monday 18 January.

Aviation minister Robert Courts insisted the government has a “very strong” package of measures in place to protect the public from any new coronavirus variants.

He told BBC Radio 4’s Today programme that the government was “toughening up already tough requirements” to ensure that new variants do not arrive from abroad while the vaccine is rolled out.

Mr Courts said a “total ban” on travel to the UK would not be right, and that pre-departure testing, passenger locator forms and the quarantine period makes the system “robust”.

Tougher lockdown restrictions have come into force in Scotland.

People who live in a Level Four area, which currently covers all of mainland Scotland, have been told they should not leave or remain outside their homes, except for essential purposes.

Working from home has become a default position for all businesses through statutory guidance and services and only those who cannot do their job from home should go into a workplace.

Guidance previously issued to only allow essential work to be undertaken inside people’s homes has also been placed into law.

Relaxing lockdown in February would be ‘disaster’ for NHS, warns scientist

Boris Johnson would be “very unwise” to remove coronavirus lockdown restrictions in March, before the majority of the population has received vaccinations, one of the government’s scientific advisers has warned.

0 0 0 0
Previous : Flu disappears worldwide while ‘Covid’ with the same alleged symptoms ‘soars’ – just a coincidence nothing to worry about, move along now nothing to see here
Next : Covid: Relaxing lockdown early would be ‘disaster’ for NHS, warns scientist