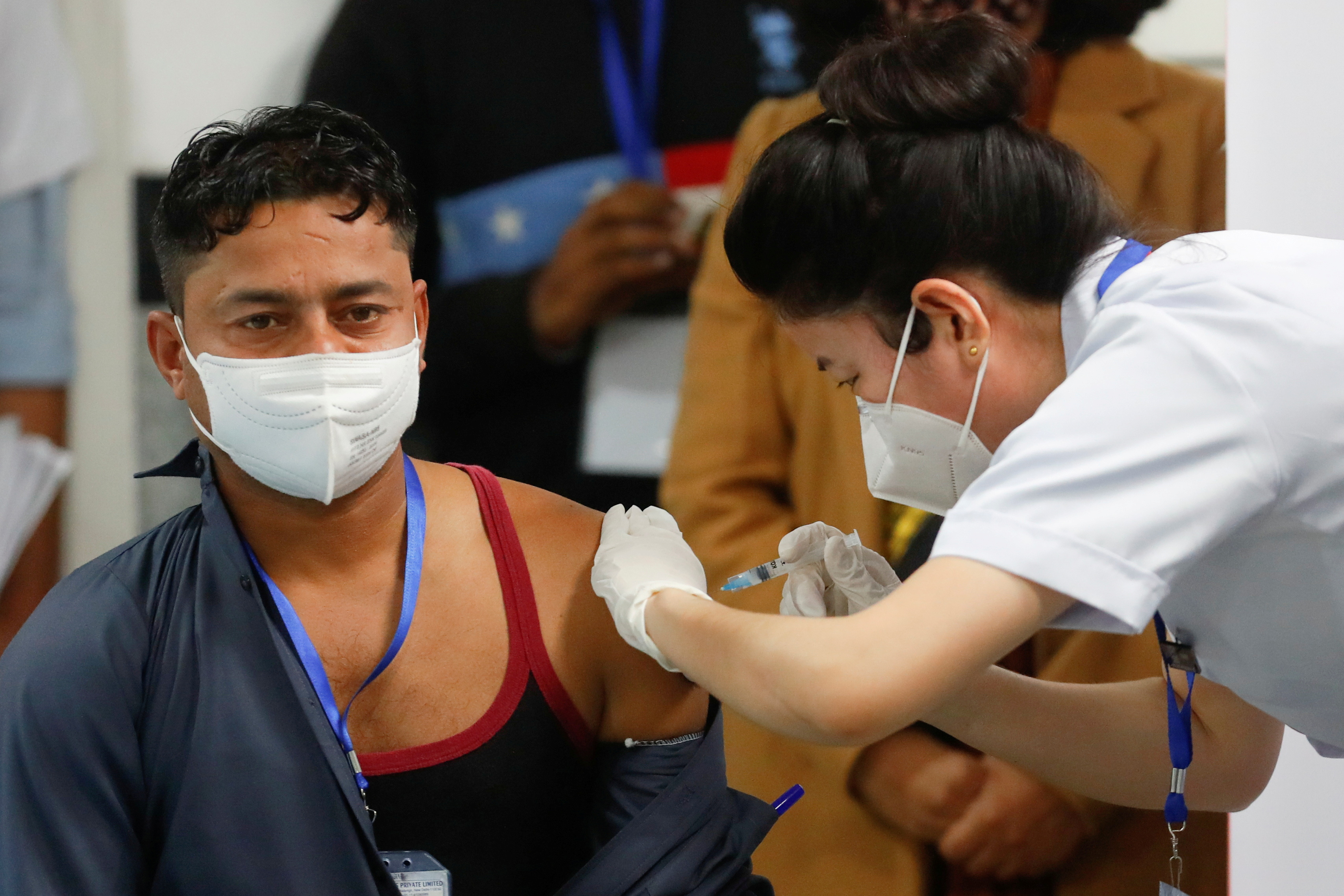 India kicked off the nationwide drive to inoculate its population against Covid-19, in what is being called world’s largest vaccination programme.

Prime Minister Narendra Modi inaugurated the vaccination drive early on Saturday morning through a nationally televised video conference, setting off the process in over 3,006 centres across states and union territories.

The first jab was administered to health worker Manish Kumar at the All India Institute of Medical Science (AIIMS) hospital amid a huge media frenzy and in the presence of health minister Dr Harsh Vardhan.

Mr Kumar, 33, a sanitation worker at AIIMS, told media outlets that he had not felt any reluctance about getting the vaccine.

“Now I don’t have any doubts regarding the vaccine. Everyone must get inoculated,” he was quoted by news agency ANI as saying.

Senior government officials also stepped forward to be among the first to receive their jabs, including AIIMS director Dr Randeep Guleria and Dr VK Paul, a senior member of NITI Aayog, the government’s policy think-tank, raising their shirt sleeves to receive the injection in front of dozens of TV cameras.

At several centres in India’s financial capital Mumbai and Pune, where vaccine manufacturer Serum Institute of India (SII) is based, people who registered to get the vaccine were welcomed with red roses.

India approved two vaccine candidates earlier this month, the Oxford-AstraZeneca vaccine that is being produced under the name “Covishield” in the country by SII, and the homegrown “Covaxin” developed by Bharat Biotech.

Controversy has surrounded the inclusion of Covaxin in the rollout due to a lack of published phase three trial data. Out of the 81 vaccination sites in the national capital Delhi on Saturday, SII’s Covishield was being administered in 75 centres, while six centres were provided with Bharat Biotech’s Covaxin. According to the current rules, a beneficiary cannot make a choice between which of the two vaccines they receive.

Dr Gururaj, a senior consultant at the Indian Spinal Injuries Centre (ISIC), one of the vaccination centres in the national capital, told The Independent that providing only one of the vaccines per centre helps maintain continuity, as both vaccines require two doses to be delivered 28 days apart.

“Worldwide there’s no choice right now on which vaccine a person can take. At this point, each centre has received one vaccine,” said Dr Gururaj, who received the Oxford-Astrazeneca vaccine himself in the morning.

Talking about his experience of getting the jab, he said he “doesn’t feel any side effects”. Hospitals had made a range of arrangements to alleviate concerns about potential side effects, with banners clearly explaining the possible adverse effects and what to do in such an instance.

After the first jab is administered, a person is kept under observation for 30-45 minutes to see if there are any signs of potential side effects, according to hospital staff.

Dr Gururaj said side effects could include allergies, flu-like symptoms, running nose or an increased blood pressure. Some people might faint, he said, but this is the case with any vaccination.

India’s first phase of inoculation aims to reach 300 million frontline workers across the country, including 30 million doctors and nurses. The second phase will include 270 million people aged 50 and over, and those belonging to the “vulnerable” category.

The start of the vaccination programme represents the biggest relief for healthcare workers in the country since the start of the pandemic, and they have been working under tremendous pressure for months.

Neetu Maitra, chief nursing superintendent at ISIC, said she was relieved and excited that after a very tough year, they finally had their hands on the vaccine.

“Nurses are also human beings, they also have their anxieties. Their parents used to call me up saying that we don’t want to expose our kids,” she said. “That was a very tough time for all of us.”

Ms Maitra, who has been a healthcare worker for 21 years, said her staff were taking counselling sessions to cope with the stress of the outbreak. However, even with the vaccine finally arriving, some doubts still linger.

“Initially apprehensions were there about which vaccine we are going to receive, whether the Covaxin or the Covishield, and the side effects. Because [there are] so many rumours, so much news there in the media, on YouTube, the internet, that side effects are there,” she said.

Before the country approved the jabs, a survey conducted by Delhi’s LocalCircles, a citizen survey platform, also found that many people appeared hesitant to take the shot, fearing side effects.

Ms Maitra, however, says, that after receiving reassurances, recipients had been “excited” to get their jabs. “In the waiting area people are very excitedly waiting for their turn and we are getting a very positive response.”

Several health workers also expressed their pride at getting the homegrown Covaxin shots.

Gita Devi, a nurse in Lucknow, the capital of the northern state of Uttar Pradesh, told the Associated Press: “I am happy to get an India-made vaccine and we do not have to depend on others for it.”

India has a long track record as a pharmaceutical powerhouse, and produces an estimated 60 per cent of the world’s vaccines. It has a successful history of eradicating smallpox and polio, and has been expanding on that capacity during the pandemic.

This is the first adult vaccination programme for the country on such a large scale, however, with earlier campaigns only targeting specific groups. The previous largest single campaign targeted 26 million infants.

The country is planning to rely on digital solutions to overcome the administrative hurdles that can come with such a massive inoculation drive. The government has launched an app – the Covid Vaccine Intelligence Network or Co-WIN – for tracking and monitoring beneficiaries of vaccinations. A dedicated 24-hour call centre has also been established for addressing queries related to the pandemic and vaccine rollout.

It is not clear what percentage of the population India plans to inoculate in order to create herd immunity – the government has not set out a specific target. But with its population and caseload, it is expected to be the largest vaccination drive worldwide.

The country has reported 10.5 million infections so far, the second biggest caseload after the US, and more than 150,000 deaths.