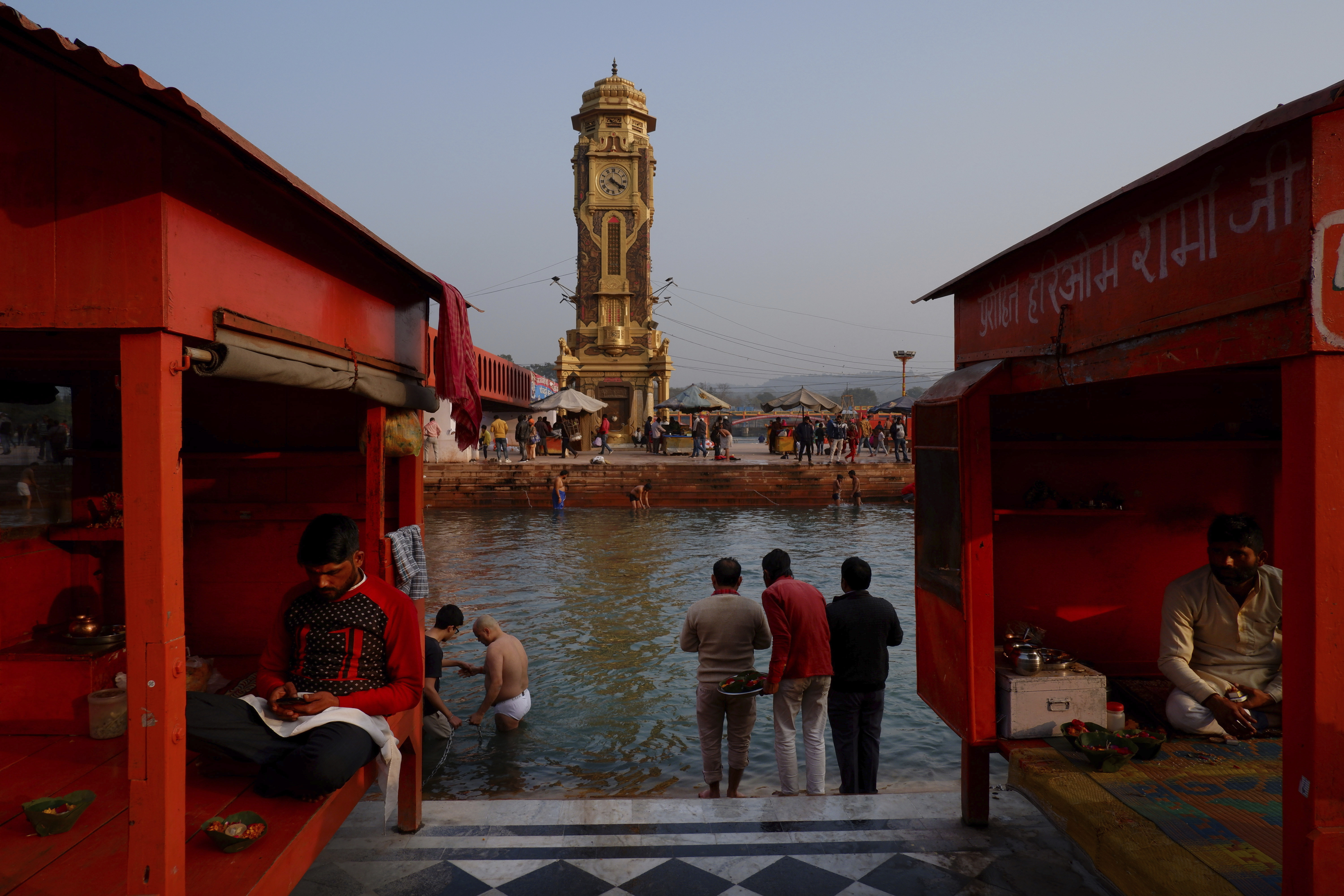 UNITED STATES-IRAN-AMERICAN RELEASED — A handwritten journal Michael White kept behind bars offers new details about his imprisonment in Iran, which ended last June when the State Department secured the Navy veteran’s release. He catalogues physical abuse from his jailers and taunts from fellow inmates while held on dubious allegations. He writes tenderly of the woman he visited even while likening himself to a mouse lured into a trap. And he brands himself a “political hostage,” held on charges to secure concessions from the United States. By Eric Tucker. SENT: 1,190 words, photos

VIRUS OUTBREAK-BRAZIL-VACCINATION-PROGRAM — Brazil hasn’t approved a single vaccine yet, and independent health experts who participated in its immunization program say the plan is still incomplete, at best. Members of the expert committee and former health officials interviewed by The Associated Press condemned the government’s unjustifiable delay in formulating a vaccination effort, in seeking syringe suppliers and for the months spent rejecting all but one possible vaccine manufacturer. By Diane Jeantet and Debora Alvares. SENT: 1,275 words, photos.

CAPITOL BREACH-CIVIL WAR — War-like imagery has begun to take hold in Republican circles, erupting into the open after the deadly attack on the U.S. Capitol by supporters of President Trump. Some Republican elected and party officials have rejected calls to tone down rhetoric calling for a civil war. The charged language evoking the conflict that cleaved the United States over slavery 160 years ago follows a year of civil unrest over racial injustice. By Jay Reeves and Julie Carr Smyth. SENT: 1,280 words, photos.

BIDEN CHANGING PRESIDENCY — In ways big and small, Joe Biden will look to change the office he will soon inhabit. Incendiary tweets are out, wonky policy briefings are in. Biden, as much an institutionalist as Donald Trump has been a disruptor, will look to change the tone and priorities of the office. “Biden’s main task is going to be need to be to reestablish the symbol of the White House to the world as a place of integrity and good governance. Because right now everything is in disarray,” one historian says. By Jonathan Lemire. SENT: 990 words, photos.

BIDEN-DAY ONE — In his first hours as president, Joe Biden plans to take executive action to roll back some of the most controversial decisions of his predecessor and to address the raging coronavirus pandemic. Those actions are outlined by his incoming chief of staff in a memo released Saturday. By Zeke Miller. SENT: 370 words, photo.

TRUMP LEGACY-FOREIGN POLICY — Joe Biden’s plan to scrap President Donald Trump’s vision of “America First” in favor of “diplomacy first” will depend on whether he can regain the trust of allies and convince them that Trumpism is just a blip in the annals of U.S. foreign policy. It could be a hard sell. By Deb Riechmann and Matthew Lee. SENT: 1,180 words, photos. WITH: BIDEN STATE DEPARTMENT —Biden fills out State Department team with a group of former career diplomats and veterans of the Obama administration. SENT: 450 words, photos

TRUMP PRESIDENTIAL RECORDS — The public won’t see President Donald Trump’s White House records for years, but there’s growing concern the collection won’t be complete, leaving a hole in the history of one of America’s most tumultuous presidencies. Trump has been cavalier about the law requiring that records be preserved. He has a habit of ripping up documents before tossing them out, forcing White House records workers to spend hours taping them back together. By Deb Riehmann. SENT: 1,490 words, photos. Eds: An abridged version of 1,090 words is available.

Find more coverage of the inauguration on the featured topic page in AP Newsroom.

SELENA-GOMEZ-BIG TECH — Selena Gomez is laying much of the blame for the violent attack on the U.S. Capitol at the feet of Big Tech. The singer told the leaders of Facebook, Twitter, Google and YouTube that they’ve allowed “people with hate in their hearts” to thrive and therefore “failed all the American people.” In an exclusive interview with The Associated Press, Gomez explains why she’s so passionate about the issue. By Amanda Lee Myers. SENT: 1,070 words, photos, video.

PAKISTAN-K2 — Pakistan’s Alpine Club says that a team of Nepalese climbers has made history by scaling the world’s second highest peak — K2 — in the winter season. SENT: 280 words.

VIRUS OUTBREAK-PROPANE SCRAMBLE — A scramble is on as restaurant and bar managers trying to keep customers warm outside this winter try to maintain a steady supply of propane for space heaters. Propane is proving crucial as businesses serve customers at tables that have been set up on sidewalks, streets and patios to comply with coronavirus restrictions. Running out of propane and facing chilly customers is a constant risk and high demand means propane exchange tanks aren’t always easy to find. SENT: 770 words, photo. This is the Sunday Spotlight.

VIRUS OUTBREAK-TEEN TUTORS — When her suburban Dallas high school was forced to move online last spring because of the coronavirus pandemic, Charvi Goyal realized that the schoolmates she’d been informally tutoring between classes would still need extra help but wouldn’t necessarily be able to get it. So she took her tutoring online, as well. Goyal, a 17-year-old high school junior from Plano, roped in three classmates to create TutorScope, a free tutoring service run by high schoolers. SENT: 830 words, photos.

VIRUS OUTBREAK-BRITAIN — Prince William says he is concerned about the mental health of U.K. ambulance drivers, police officers and other first responders who are being exposed to extraordinary levels of trauma and death as coronavirus cases soar. SENT: 450 words, photos.

VIRUS OUTBREAK-CHINA — China has finished building a 1,500-room hospital for COVID-19 patients to fight a surge in infections the government said are harder to contain and that it blamed on infected people or goods from abroad. SENT: 510 words photos.

CAPITOL BREACH-NATIONAL GUARD — By the busload and planeload, National Guard troops are pouring into the nation’s capital thanks to governors who are answering the urgent pleas of U.S. defense officials for troops to safeguard Washington even as those state leaders keep anxious eyes on possible violent protests in their capitals. SENT: 970 words, photos.

INAUGURATION-MOVING DAY — Inauguration Day is also moving day at the White House. It’s typically a precision operation carried out in about five hours as the residence staff labors to move out one leader and settle in another. The clock normally starts ticking when the outgoing and incoming presidents leave the White House together to head to the Capitol for the swearing-in ceremony. But things will unfold a bit differently this year after President Trump announced that he is skipping Joe Biden’s inauguration. The coronavirus pandemic is another complicating factor. SENT: 760 words, photos. WITH: BIDEN-EXPLAINING INAUGURATION DAY — Between the still-raging pandemic and suddenly very real threat of violence, the inauguration of Joe Biden and Kamala Harris promises to be one of the most unusual in American history. And one you probably can’t attend. SENT: 630 words, photos.

BIDEN-SCIENCE —Introducing his science team, Joe Biden says “science will always be at the forefront of my administration” and is elevating the post of science adviser to Cabinet level, a White House first. SENT: 570 words, photos.

CAPITOL BREACH-GOP FUNDRAISING — Republicans are worried that a corporate backlash over the riot at the Capitol could make it harder to win back the Senate. Several corporate giants have already halted donations to some Republican lawmakers. SENT: 990 words, photos.

CAPITOL BREACH-FEDERAL PRISONS — All federal prisons in the United States have been placed on lockdown, with officials aiming to quell any potential violence that could arise behind bars as law enforcement prepares for potentially violent protests across the country in the inauguration run-up. SENT: 610 words, photos.

CAPITOL BREACH-BAKED ALASKA ARREST — Far-right media personality Tim Gionet, who calls himself “Baked Alaska,” has been arrested by the FBI for his involvement in the riot at the U.S. Capitol. SENT: 200 words, photo.

CAPITOL BREACH-MISSOURI WOMAN — A Missouri woman has been charged with taking a splintered name plate belonging to House Speaker Nancy Pelosi during the riot at the U.S. Capitol. SENT: 200 words.

CAPITOL-BREACH-STATEHOUSES — Chain-link fencing surrounds state capitols and police and National Guard troops are on patrol or standby in advance of possible violence leading up to the inauguration of President-elect Joe Biden. With the FBI warning of potential violence at all state capitols Sunday, the ornate halls of government and symbols of democracy looked more like heavily guarded U.S. embassies in war-torn countries. SENT: 220 words, photos.

REL-INAUGURATE-INTERFAITH VIGIL- As a politically divided nation prepares to inaugurate a new president in the wake of a violent insurrection at the U.S. Capitol, a group of Christian leaders is hoping to ease tensions through prayer during three days of ecumenical, nonpartisan programming. SENT: 565 words, photos.

HAWLEY-FUNDRAISER-CANCELED — Loews Hotels it has canceled an upcoming fundraiser for U.S. Sen. Josh Hawley, the latest fallout for the Republican lawmaker after the U.S. Capitol uprising. SENT: 430 words.

LIBYA — The top U.N. official for Libya says an advisory committee of the Libyan Political Dialogue Forum has agreed on a mechanism for choosing a transitional government that would lead the conflict-stricken country to elections late this year. SENT: 450 words, photo.

GERMANY-MERKEL’S PARTY — Chancellor Angela Merkel’s center-right party has elected Armin Laschet, the pragmatic governor of Germany’s most populous state, as its new leader — sending a signal of continuity months before an election in which voters will decide who becomes the new chancellor. SENT: 850 words, photos.

SUDAN — A local medical official in Sudan’s West Darfur province says that clashes between Arabs and non-Arabs have killed at least 32 people and wounded 79 others. SENT: 440 words.

UNITED NATIONS-MALI-PEACEKEEPERS— The United Nations says a peacekeeper from Egypt was killed in Mali’s northern Kidal region on Friday, and another was seriously injured, after their vehicle hit an explosive device during a logistics convoy. It brought the toll to five U.N. peacekeepers killed in northern Mali in just a week. SENT: 180 words.

AFGHANISTAN — At least two members of an Afghan militia opened fire on their fellow militiamen in the western Herat province, killing 12, in what provincial police describe as an insider attack. SENT: 450 words, photos.

PALESTINIANS-ELECTIONS — Palestinian President Mahmoud Abbas has announced that the first presidential and parliamentary elections since 2006 will be held later this year. But the road to the vote — key to advancing Palestinian statehood and mending a rift between Abbas’ Fatah party and the Islamic militant group Hamas — is littered with obstacles. SENT: 800 words, photos.

MARCH FOR LIFE — Organizers of the March for Life, the anti-abortion movement’s preeminent annual event, are asking their supporters nationwide not to gather in Washington this year because of the COVID-19 pandemic and political unrest. SENT: 370 words, photo.

BOSTON MARATHON VIRTUAL VILLAGE — Organizers of the Boston Marathon have launched a virtual Athletes’ Village to reproduce at least some of the camaraderie of the real thing. The Boston Athletic Association says it’s an attempt to keep runners connected while a date for the 125th running of the planet’s most storied footrace is worked out. SENT: 590 words, photos.

ISLE-ROYAL-WOLVES — One of the world’s longest-running wildlife field studies has fallen prey to the coronavirus pandemic. Since 1959, a research team has spent most of the winter observing the interplay between wolves and moose at Isle Royale National Park in Lake Superior. But this year’s mission has been scrapped. SENT: 310 words, photo.

FBN–RAVENS-BILLS — In a showdown of top young NFL quarterbacks, Josh Allen leads the Buffalo Bills against Lamar Jackson and the Baltimore Ravens in an AFC divisional playoff. Both quarterbacks are coming off wild-card wins for their first playoff victories. UPCOMING: 800 words. Game starts 8:15 p.m.

0 0 0 0
Previous : Inauguration Week 2021: A day by day guide to events
Next : Man arrested at DC checkpoint with loaded handgun and ‘unauthorised’ inauguration credentials