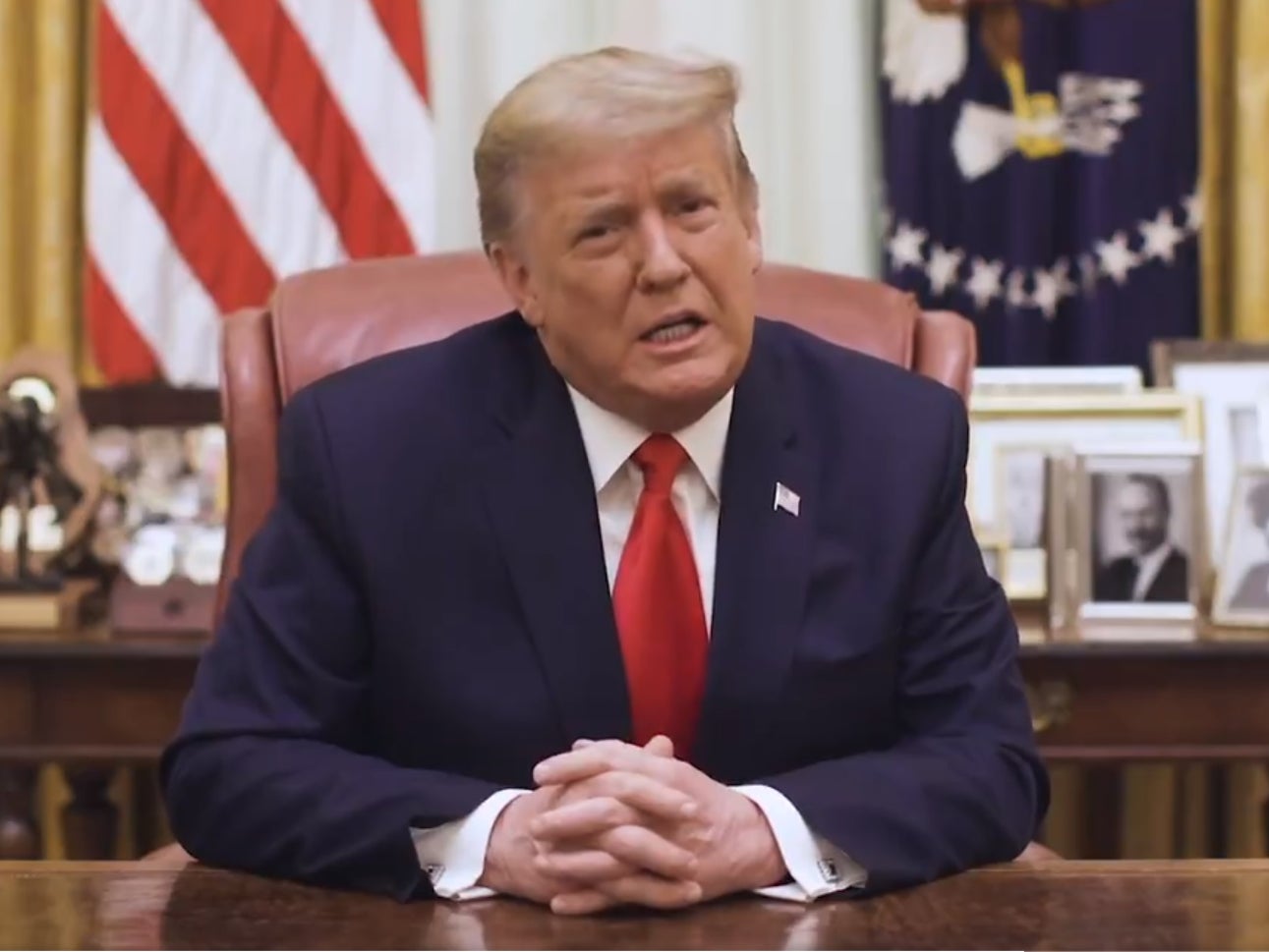 Donald Trump has told MAGA followers that if they truly support him, they will not engage in “mob violence”. In a video posted to the White House Twitter account after he was impeached for the second time, the president appeared chastened but was unrepentant about his role in last week’s Capitol riot.

“No true supporter of mine could ever endorse political violence,” Mr Trump intoned. He added that “making America great again has always been about defending the rule of law … and upholding our nation’s most sacred traditions and values” – a claim undermined by his months-long attempt to overturn the result of a fair election.

Mr Trump appended a complaint about being banned from social media to the message, describing it as “an unprecedented assault on free speech”.

Trump had to be talked out of going to Congress to defend himself against impeachment, says report

Donald Trump wanted to be in the House of Representatives to observe his second impeachment and defend himself, it has been reported, but was talked out of it by his advisers, writes Stuti Mishra.

As the House voted 232 to 197 on Wednesday to impeach Mr Trump for the second time, the president released a video condemning the Capitol riots and saying he was “shocked” by the scenes of violence.

Yet according the The New York Times, regardless of the note struck in that public-facing video Mr Trump remained defiant and sullen behind closed doors.

Joe Biden will be dropping his plan to take an Amtrak train to Washington, his favourite mode of transport in a career spanning three decades, amidst fears of violence on inauguration day in the wake of the US Capitol riots last week, writes Namita Singh.

Mr Biden had originally decided to take the 90-minute train ride from his hometown of Wilmington, Delaware, to the Union Station in Washington, but the plan had to be cancelled in view of potential threats in the Capitol and across the country in the lead-up to his inauguration on 20 January, reported CNN.

Rep. Judy Chu (D—CA) called for President Donald Trump’s removal from office as the House began debates surrounding a second impeachment, saying: “This time the terrorists were radicalised right here in the United States. Worse, they were radicalised by the president.”

The California Democrat made the statements in an opening speech on Wednesday, describing how she and her aides were forced to hide as the president’s extremist supporters stormed the building last week, carrying weapons and confederate flags while donning Trump campaign gear, writes Chris Riotta.

“Last week, I hid in an office for hours, terrified to open the door because I did not know if a rioter was on the other side ready to attack, kidnap, or murder me,” she said. “Donald Trump must be held accountable.”

Newly elected Republican congresswoman Marjorie Taylor Greene has said she would be filing articles of impeachment against incoming president, Joe Biden, for alleged “abuse of power” on his first day at the Oval Office.

While 10 Republicans voted to support the impeachment article, Ms Greene was amongst the 197 House representatives, who defended the president.

Watch the moment Trump was impeached a second time

It might have begun with the solemn and iconic phrase, “My fellow Americans…”, but Donald Trump’s video message to the nation was still, in the end, a vehicle for the president to rehash his grievances – just like his rally speeches and press conferences, only with nicer language.

The address was put out after Mr Trump was impeached for a second time by the House of Representatives.

In the video, posted to the White House’s Twitter feed, he added: “The efforts to censor, cancel and blacklist our fellow citizens are wrong, and they are dangerous … All of us can choose, by our actions, to rise above the rancour and find common ground.”

The president has spent four years calling journalists “fake” and “enemies of the people”, and threatened multiple times to try to revoke the licences of broadcasters he disliked.

Mr Trump’s main message was that political violence is not acceptable and something “true” MAGA supporters should never engage in. “I unequivocally condemn the violence” seeing during the Capitol riot, he said, though without acknowledging his own role in fomenting it.

Mr Trump added that “making America great again has always been about defending the rule of law … and upholding our nation’s most sacred traditions and values” – a claim undermined by the fact that he has spent two months trying to overturn the result of a fair election, and months before that demonising the process and sowing doubt about it.

You can watch the video below:

With Trump impeached again, it’s up to Mitch McConnell to decide what ‘healing’ means for Republicans

Senate Majority Leader Mitch McConnell has not tipped his hand about how he plans to vote at the second impeachment trial of Donald Trump, writes Griffin Connolly.

“While the press has been full of speculation, I have not made a final decision on how I will vote and I intend to listen to the legal arguments when they are presented to the Senate,” the Kentucky Republican has told his GOP colleagues, per his office.

Let’s frame that another way: The Republican leader of the Senate is leaving open the possibility of convicting the Republican president for “incitement of insurrection” and him from e

Catch up: House impeaches Donald Trump for inciting a bloody insurrection at the US Capitol

The US House of Representatives has impeached Donald Trump for fomenting a deadly insurrection at the Capitol on 6 January 2021, making him the first president in the nation’s history to be impeached twice.

Every Democrat in the chamber voted for the lone impeachment article, which officially accuses the president of “incitement to insurrection”, write Griffin Connolly and Chris Riotta.

Ten of a total 211 House Republicans joined them.