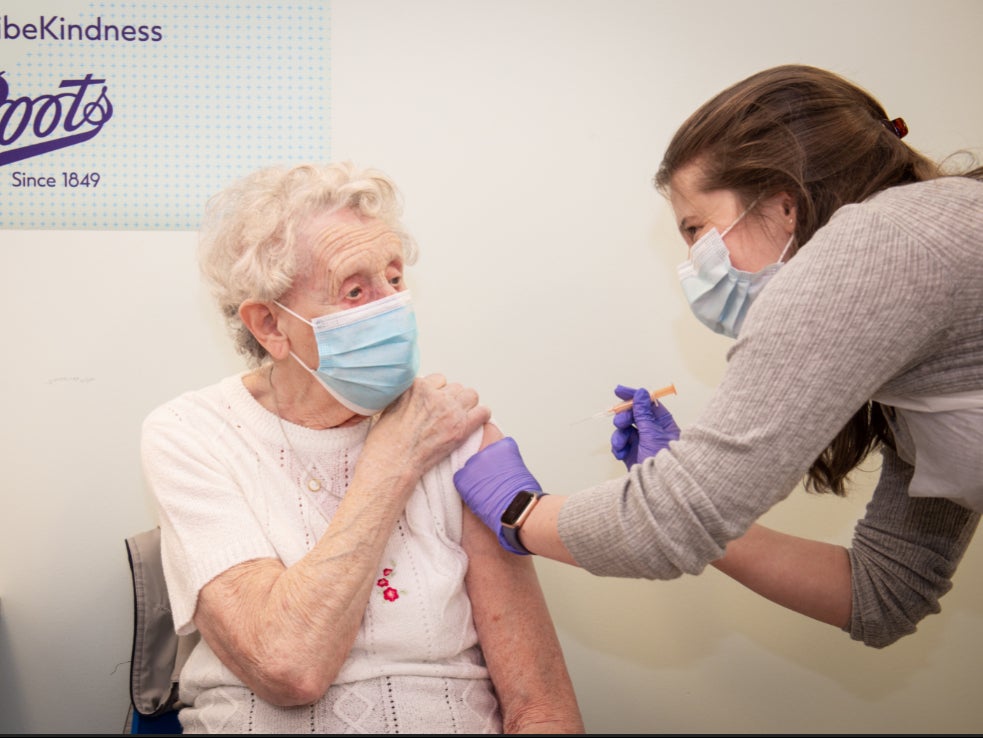 Covid news live: Travel from Brazil to UK could be banned

Travel from Brazil to the UK could be banned in response to a new variant of coronavirus in the South American country.

The measure, potentially also covering Brazil’s 10 neighbouring countries, is expected to be considered at an afternoon meeting of the government’s key “Covid-O” committee, which oversees restrictions.

Meanwhile, transport secretary Grant Shapps has announced new rules requiring travellers arriving in England to have a negative coronavirus test have been delayed “to give international arrivals time to prepare”.

High-street pharmacies have begun rolling out Covid-19 vaccines as the UK’s virus death toll has now climbed above 100,000.

Boots and Superdrug branches will be among six stores across England able to administer the jabs, while the government aims to hit its target of vaccinating everyone in the four most vulnerable groups by the middle of next month.

Andrews Pharmacy in Macclesfield, Cullimore Chemist in Edgware, north London, Woodside Pharmacy in Telford and Appleton Village pharmacy in Widnes will be in the first group to give the injections, alongside Boots in Halifax and Superdrug in Guildford.

Boris Johnson told MPs that distribution “will be going to 24/7 as soon as we can” but said supply of doses remained the main barrier.

Downing Street has said ministers are looking at the “possible options” to deliver coronavirus vaccines around the clock, but was unable to put a date on the rollout.

“Some people who may benefit from being able to receive a vaccine at different hours to others, so we’re open to the options and we are looking at how we can deliver it.”

A year ago today, the World Health Organisation tweeted about how preliminary investigations by Chinese authorities “found no clear evidence of human-to-human transmission of the novel coronavirus identified in Wuhan”.

Today, an international team of 13 scientists examining the origins of the virus that causes Covid-19 has arrived in Wuhan.

NHS insists London is getting its ‘fair share’ of vaccine supply

The NHS has insisted London is getting its “fair share” of vaccine supply after mayor Sadiq Khan claimed the opposite.

A spokesman for the NHS in London said: “The NHS coronavirus vaccination programme, the biggest in the health service’s history, has got off to a strong start with a quarter of a million Londoners receiving their first vaccination against Covid, giving significant protection to those most at risk from the virus.

“We have more than 100 vaccination sites up and running across London, including the NHS Covid-19 vaccination centre in the ExCeL London, and more are opening all the time.

“London is getting its fair share of vaccine supply for the priority groups we have to vaccinate by mid-February.”

The UK yesterday suffered more deaths in a single day than dozens of countries have experienced since the start of the pandemic, including Australia, Malaysia and Nigeria. Rory Sullivan looks at the numbers:

Midlands ahead of other regions for jabs given

More vaccine doses have been administered in the Midlands than any other area of England, official figures show.

A total of 447,329 doses have been administered in the region, the first to vaccinate a patient as part of the programme, with 387,647 people having received at least one injection.

The northeast and Yorkshire have delivered 433,045 doses, with 370,694 first doses administered, according to the NHS England figures, which run to Sunday.

The data, the first time a regional breakdown has been given, shows that 2,371,407 jabs were given between 8 December and Sunday, including both first and second doses.

London mayor Sadiq Khan claimed the capital was not getting its fair share of vaccine doses, with 237,524 doses delivered.

The Labour mayor said: “I am hugely concerned that Londoners have received only a tenth of the vaccines given across the country.

“The situation in London is critical, with rates of the virus extremely high, which is why it’s so important that vulnerable Londoners are given access to the vaccine as soon as possible.”

Regular testing in schools can play a “valuable” part in controlling transmission of the virus, scientists say after a pilot programme.

A partnership led by the University of Southampton has tested 16,000 staff and pupils in four schools in the Southampton area and at the university itself.

A total of 66,458 saliva-based tests were carried out, with 123 positive tests found in a six-week period in September and October.

All positive tests were confirmed by PCR testing and no false positives were recorded, with 95 per cent of results returned within 12 hours for the programme funded by the Department of Health and Social Care.

A university spokesman said: “Students, staff and parents valued the testing highly, and school attendance increased to 94 per cent, in contrast with reduced attendance rates at other schools locally and nationally.”

Health minister Lord Bethell said: “With around one in three people showing no symptoms, regular testing will play a major role in supporting our schools and universities in the coming months.”

The home secretary has defended Boris Johnson’s riding a bike away from his own borough, but was unclear about how “local” should be defined.

“People do exercise in so many different ways,” Priti Patel said. “London is a big geography in terms of cycling – five miles, 10 miles – many people cycle big distances.”

She stressed exercise was safe so long as people did it alone.

New analysis has found lockdowns introduced in the spring of 2020 had a smaller impact on air pollution levels than first reported, when other factors that affect the level of pollutants, such as weather conditions, are also taken into consideration.

Sir Keir Starmer has criticised the government for delaying the requirement for pre-departure coronavirus tests before arriving in the UK.

During a visit to a mass vaccination centre in Stevenage, the Labour leader said: “It’s a complete mess again. Priti Patel has talked tough about the borders but other countries have been doing testing for months and months.

“People are really worried about strains in other parts of the world, in Brazil, et cetera.

“Yet again we’ve got a prime minister and a government that’s late, slow and… they’re putting testing back another few days.”

How many people in the UK have had a Covid vaccine?

With hopes of ending a third national lockdown, Boris Johnson has pledged to inoculate everyone in the top four risk categories by mid-February.

Everyone else will be offered a vaccine by the autumn, the government says.

Matt Mathers takes a look at how many people have been vaccinated in the UK here: