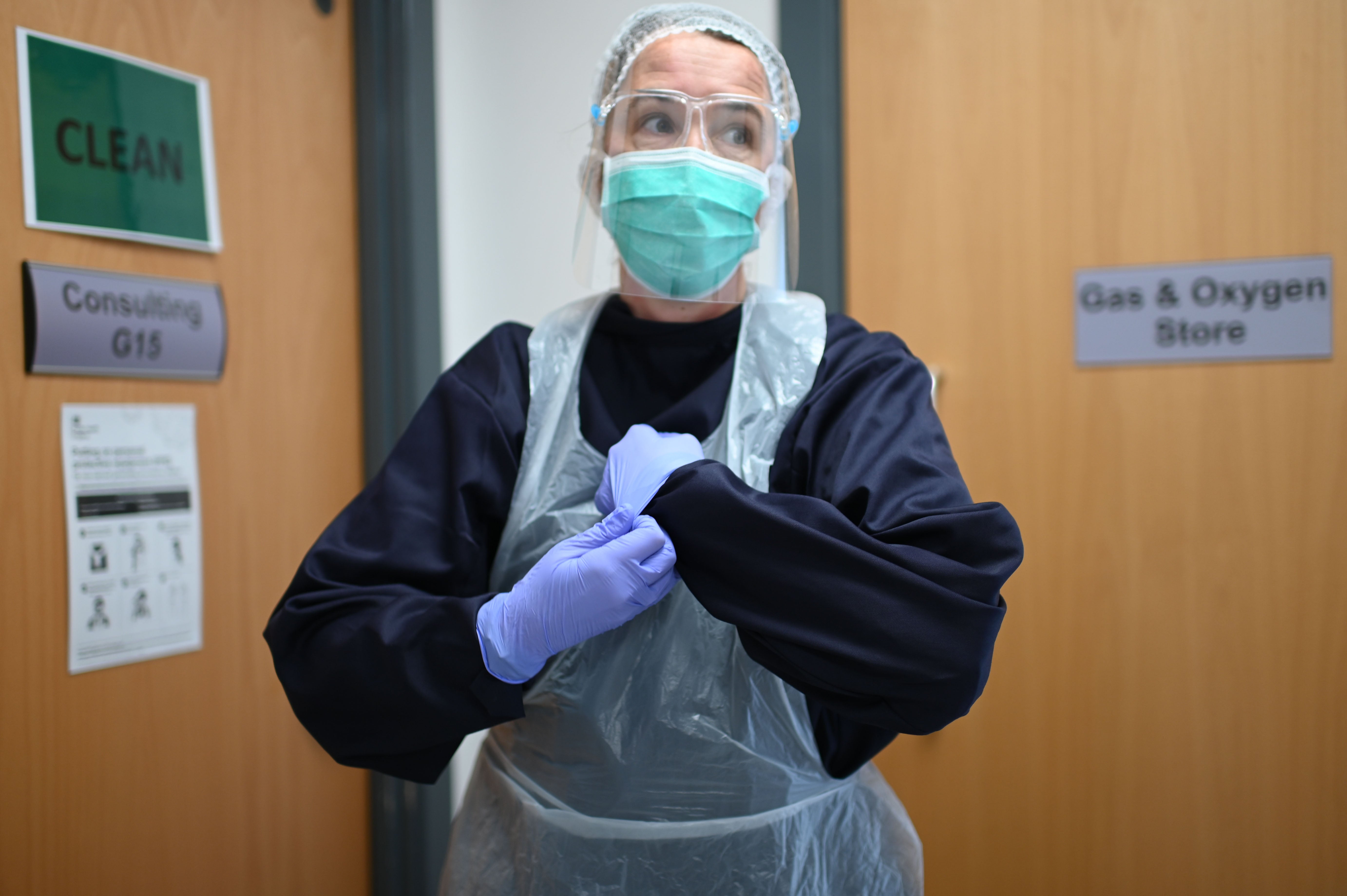 Doctors and nurses treating coronavirus patients in overstretched hospitals are increasingly suffering from mental health issues, figures show – as health chiefs warn staff will be pushed to their limit over the next few weeks of the pandemic.

The number of doctors seeking psychiatric help through the British Medical Association has doubled since the pandemic began, The Independent can reveal, while new research shows that nearly half of all NHS staff in intensive care units (ICUs) are likely to meet the threshold for post-traumatic stress disorder (PTSD), anxiety or depression.

And in a letter sent to doctors on Tuesday, the UK’s chief medical officers said that the weeks ahead “are likely to be among the most challenging of all our professional lives” and will push staff “to the limits of [their] physical and mental endurance”.

“Please look after your colleagues – protracted, relentless crises are often much more draining than short intense ones,” the four senior officials wrote.

Experts fear the prevalence of psychiatric illnesses among frontline medics is reaching new heights, with the NHS under mounting strain amid a deluge of Covid-19 hospitalisations that has left staff further overwhelmed and drained.

Dr David Wrigley, wellbeing lead and deputy chair of the BMA, told The Independent that doctors and nurses were being left “physically and mentally scarred” as a result of their experiences, adding that staff “will struggle to get back to the normal way of life” once the pandemic has passed.

Shortages of healthcare workers have exacerbated the mounting mental health crisis. A total of 35,075 people are currently hospitalised with Covid-19 – almost double the peak bed occupancy of the first wave.

Yet as the demand for patient care grows on a daily basis, the NHS has been forced to contend with high levels of Covid-related absences among its workforce. Last week, The Independent revealed that the virus accounted for almost half of all staff absences – 46,378 out of a total of 95,452 – with the figure as high as 58 per cent in London and the southeast.

Rates of anxiety, depression and burnout are soaring among frontline staff amid the intense pressures of caring for critically-ill patients, with a total of 371 doctors accessing the BMA’s helpline in November – up from 251 in January, an increase of 47.8 per cent.

This is the highest figure recorded by the BMA’s counselling service during the Covid-19 crisis. In December 2018, two years earlier, just 132 calls were made to the helpline.

Separate research from King’s College London has meanwhile shown that 45 per cent of doctors and nurses based in ICUs met the threshold for probable PTSD, anxiety or depression during June and July of last year.

From a survey of 709 healthcare workers conducted in nine ICUs in England, more than one in eight respondents (13 per cent) thoughts of suicide or hurting themselves in the previous two weeks.

“The severity of symptoms we identified are highly likely to impair some ICU staffs ability to provide high quality care as well as negatively impacting on their quality of life,” said study lead professor Neil Greenberg.

Dr Ankur Khajuria, an NHS surgeon and lead researcher for the Royal College of Surgeons on the mental impact of Covid-19, said his latest research showed that nurses and female members of staff have shown a greater propensity for anxiety, depression and burnout than their colleagues.

This trend also applies to staff who have been forced to rely on inadequate PPE within their trusts, as well as healthcare workers who are regularly treating Covid patients, he told The Independent.

He described the pressures created by the pandemic and the lack of staff across the NHS as a “perfect storm” which has pushed healthcare workers to the brink.

Those on the frontline have warned resilience among staff is at “breaking point” and that more and more healthcare workers are taking sick leave – or even resigning – due to the unprecedented demands of the Covid-19 crisis.

One senior doctor from North Yorkshire, who asked not to be named, told The Independent it felt “as if we are the musicians aboard the Titanic continuing to play as the ship sinks and chaos reigns all around us”.

“When this all started in March last year, because it was new and unprecedented, everyone’s morale was high,” he said. “They went into fighting spirit. They didn’t realise at the time it’d extend for so long.

“In terms of the pressures, in the first wave it wasn’t as bad as it was now. We had more staff, less absences due to isolation, less burnout. As it’s gone on, the rotas got extended, we have been asked to work extra hours, annual and study leave have been cancelled, junior doctors have been able to rotate.”

Some healthcare workers have reported starting their shifts with “seven or eight” people short due to Covid-19, stress-related illnesses and instructions to self-isolate.

Others have said they’ve been unable to access 30-minute “protected time” sessions for wellbeing support due to shortages of staff on hospital wards.

The North Yorkshire doctor said he had “huge numbers of staff out with burnout”, but there was “not much you can do about it”.

Even the mental health support services offered by his trust are stretched to their limits, he said, having reached out for psychiatric help himself back in September.

“There have been colleagues in the last few months who have said they can’t do this anymore,” he added. “After the pandemic, there’s already doctors saying they want to leave now. And there are people who have handed resignations in throughout all this and found better prospectives overseas.”

The scale of the mental health crisis within the NHS has been repeatedly laid bare over the past 12 months.

According to the most recent “tracker” survey conducted by the BMA, 57 per cent of doctors in the UK currently feel anxious, stressed, depressed or burnt-out as a result of the crisis.

Nearly half of the 8,000 respondents, which included junior doctors, consultants and GPs, said their mental wellbeing was now worse than before the pandemic.

And nine in 10 doctors said they felt uneasy that they could not provide the standard of care they wanted during the pandemic.

“That has a knock-on effect,” said Dr Wrigley. “Doctors get that guilt that they can’t provide the care that they feel the patients need.

“And doctors are not good with saying they’re unwell or just speaking out about it. They just tend to battle on and hope they can manage. That’s a real concern as you just end up burning out.”

Warning that the next four weeks are “going to be the worst period in the history of the NHS”, Dr Wrigley added: “When we get through this, there’s going to be huge concern that doctors will struggle to get back to the normal way of life. It’s almost like PTSD. They’ll be physically and mentally scared from what they’ve been through.”

NHS Providers chief executive Chris Hopson similarly warned on Tuesday that core staff could leave the NHS after the pandemic due to the “unsustainable” workloads.

The research from King’s College London concluded that poor mental health was common in many ICU clinicians, though more pronounced in nurses than in doctors or other healthcare professionals.

Throughout the pandemic, ICU staff been required to work in areas where the perceived risk of Covid-19 exposure is high and wear PPE for long periods of time.

In the face of rising hospital admissions and equipment shortages, these healthcare workers have also been expected to make emotionally draining decisions over which patients to prioritise, while harbouring their own fears of catching the virus and potentially passing it on to their loved ones.

“People involved either in the decision making or are just part of the care of these patients, they’ll be coming across these events multiple times in their shifts over a prolonged period of time,” said Dr Khajuria. “That’ll take it’s toll.

“There’s fear too of going from a Covid ward to home, fear of giving it to your spouse or child, fear of passing the infection on – especially with the new variant – and just having to have that in the back of your mind every time.”

On Tuesday, the latest government data showed that a further 1,243 people had died in the UK after testing positive for Covid-19, bringing the total to 83,203. Just over 45,500 new infections were recorded, while 4,240 patients were submitted to hospital with the disease on 7 January.

Jeremy Dawson, professor of health management at Sheffield University, told the Health and Social Care Select Committee on Tuesday that the NHS relied on its staff going the extra mile.

Yet those on the frontline said they were growing tired of such rhetoric and that the expectation to “keep going” was no longer enough.

“Most staff have had emails from senior management of call to arms, to step up. But all we’ve received is a thank you,” said the North Yorkshire doctor. “I don’t think there’s any capacity left in the people I know to do anymore.

“Healthcare workers are put on a pedestal as superheroes. First time around that was okay but it’s setting unrealistic expectations. These doctors and nurse then start to go into negative spiral: ‘I’m not not supposed to feel low, I’m meant to rise above these feelings’. That doesn’t help with mental health at all.

“That’s a huge thing, to realise that doctors and nurses are human beings first and foremost.”